* The service last night was good. It focused more on the Last Supper, which I guess really is the focus of Maundy Thursday - many years we also did something like a Good Friday/Tenebraes service as part of it and that was what made it more difficult (and longer). It was mostly readings from the Gospel of John, I did about half of them and the pastor did the other half.

He ended with a piano arrangement (yes, he plays the piano) of Via Dolorosa which is...I think Sandi Patti was known for it? But the odd thing is that if I had not known what the song was, I'd have thought "oh that's a Joe Hisaishi composition for one of the Ghibli movies"

Though I also admit I thought about how this year was different. Many previous years we walked out into a threatening thunderstorm - into the gathering dusk, which seemed appropriate. But I also thought about how D. - who had been at these things and I think even led one one year - was not here for it. And last year's didn't happen, of course, that was the week after we stopped doing in-person church and it was before virtual church was set up, so the last time I was at one of these things, it was before my dad died.

The passage of time is a strange thing.

* Today was mostly tech-editing and I also wrote an exam. And I traveled to a "new" grocery to me. I am not going into Texas for a little while; there is construction on the bridge over the Red River and they've narrowed the lanes over the bridges, and it's uncomfortable to drive over them. But in one of the towns south of me, a new small grocery opened up and on their Facebook page they featured meats, so I thought, "Eh, it's less than 15 minutes away, worth a try."

If the steak I bought is good, I might go back, though just for that - their produce was very limited and brands of things like cheese are not the brand I prefer. So I did wind up going to Pruett's for the other things.

* But also my new athletic shoes came last night, and I tried them out in a workout today and yeah, part of my back issues might be having used worn-out athletic shoes for a while, it felt much better. Also I slept on my side (instead of my stomach) again last night - and again, no back pain upon getting up.

So it's fixable. And it's an easy enough fix. (Yes, I still probably need to replace my mattress but I can do that this summer when I have more time).

But I can't quite describe the relief I feel - not just the relief of standing up out of bed and not having my back twinge, but relief from the worry of "what is wrong? do I need to go to the doctor? do I have something really bad going on?" or  "what if this gets a lot worse, what if some morning I cannot get out of bed to get to work?" (I don't keep my phone in my room - no convenient outlet for charging that already isn't in use, and also I don't want to get all the alerts and things - I understand that Amber alerts are important to people who might be out and about, but not for someone trying to sleep in their bed at home. So anyway: I could not easily call for help if I were unable to move out of bed, I'd have to flop myself out and crawl on the floor to my phone - not a far crawl, but still)

But yeah, not having to worry about "what if it gets worse" is really good. And I just generally FEEL better, I think the pain stayed with me a little (it may have been muscle cramps? It felt like a muscle spasm). Also I was worrying about "holy cow how will I do my fieldwork with this kind of pain this summer?"

* The most recent gachapon crate came, and I only opened one of the capsules in it so far, but I got this 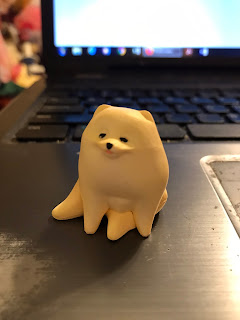 LOL it's Cheems. (there are a few slightly offensive things over there; seems to be the nature with explanations/examples of memes)

Unfortunately I don't have a "Swole Doge" to contrast him with. (Actually the documentation that came with the box says it's a Pomeranian, and Cheems is a Shiba, but he looks enough like it.)

Posted by fillyjonk at 9:23 PM

we had Maundy Thursday AND Good Friday. There is a bit of scriptural recapitulation: the Garden, the arrest, but they came from different Gospels. we had lots of music for the latter, most of which had been previously recorded from earlier years, but one (plus a couple of hymns) recorded specifically for GF.