Saturday was the biweekly Zoom knitting meetup, and I decided to start something new - I'd had this yarn wound off for a while and the pattern with it, so I decided it was time 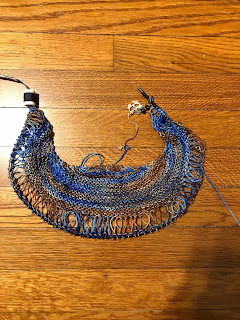 the pattern is by Joji Locatelli and is called "Storm." It's a fingering-weight yarn shawl. So far, that's just the very first section - 26 rows of garter stitch (with some increases) and then four rows incorporating a dropped- stitch pattern. The yarn is Leading Men Fiber Arts in the colorway "Country Roads"

I do not have the energy to go into the next section, which involves short rows and seems like it would require more attention. 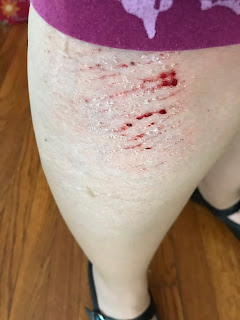 The perspective of that photo looks really weird (my leg looks huge) and that's right below the knee, but when I was walking back from my car to get the mail when I came home, my ankle turned (that happens: I pronate and it's not perfectly corrected by orthotics). Usually I notice it before I trip but I was carrying a couple of things and didn't realize I was falling until I almost was on the ground. Luckily I did not stiffen up or I might have really hurt myself.

It does look better now after cleaning it up 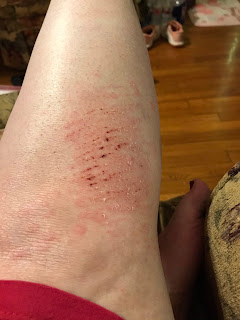 Also taken with a more-normal perspective.

2. The worse thing? I have a leak under the kitchen sink again. This time it is the drain hose from the dishwasher, I guess it was kinked up long enough that it got weakened and a hole broke in it. So even though I'm not using the dishwasher (No, I still have not looked into repair/replacement though I might be doing that sooner than planned depending on what the plumber says), water leaks into it and was running out under the sink.

I admit I was just kind of defeated by it at first - I was going to make myself a pizza from scratch for dinner and gave up because when you can't really wash dishes, how do you cook? (I got a pizza from out even though those are less good for you). I did rig a bucket under the hose so I can do a little minimal dishwashing until the plumber comes tomorrow.

I fear this is going to be an extended issue; would not be surprised if this leak and a previous leak rotted some of the boards that will need to be replaced, so first I will have to get some kind of construction guy (please God let the plumber know of a good one 'cos I don't) in to replace them, THEN I can get a new dishwasher and get it installed. And this time I might see if the plumbers I normally use will pick it up from the appliance place and install it for me instead of Lowe's sending a semi-qualified dude (who may have messed up the hose that's now leaking when he installed the currently-defunct dishwasher).

I had just been handwashing dishes which is not at all terrible (though I would like to eventually replace the dishwasher) but I can't unless the hose is fixed. I think the easiest fix would be to remove it from the main sink drain and just temporarily cap that off but I'll see what the plumber suggests.

It may also suggest a rodent problem? I hope not, I've not seen any sign, but I can't tell if the plastic just fatigued and broke or if it was gnawed.

So anyway: I am beat and kind of emotionally wiped out. This would have been hard in the before-times, it's worse now. (And I anticipate it being a while on the dishwasher, even if I felt financially and logistically ready to deal with it: I have read that appliances are in somewhat short supply because of shipping delays due to COVID)

If the plumber can't deal with it satisfactorily tomorrow, I may just buy paper plates and plastic forks and be wasteful for a while until it can be dealt with. I don't fancy having to empty a bucket every time I wash a few dishes.

Posted by fillyjonk at 9:05 PM