One of my ease-into-the-workday things is to click on Atlas Obscura and see what they have on offer in the way of stories.

Well, since this is Hallowe'en week, it's spooky stuff/graveyards/etc.

Not up for it this year. And probably never really up for the really unusually spooky stuff (I still think about an article I read some years back, about Buddhist monks who allegedly turned themselves into mummies, very slowly, by changing their diet so that fat and muscle got digested away, and ending it by drinking a tea made from the varnish plant, and that creeped me out badly)

But this year, oy. This whole second half of 2019 has been like my own personal haunted house so I am really not up for it this year. And yes, I UNDERSTAND: the original point of Hallowe'en is to (a) acknowledge that, given Christianity, Death does not have the final say and (b) laugh at stuff that scares you. But this year man, I'm just tired. I've borne up under a lot and I don't have a lot of capacity left for laughing at the slings and arrows life sometimes just fires at you.

So yeah. I am opting out as much as I can this year.

I *am* going to temporarily color my hair. I ordered hair chalk in "Violet Sky" and "Sugar Plum." Here is a quick proof-of-concept I did the other night before washing my hair, both to test how hard the chalk was to put in, and how readily it washes out: 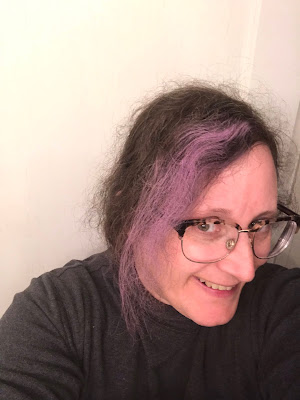 That's the "Violet Sky," and I'm surprised how well a fairly light color shows up on my darkish hair.

So that's going to be my one concession to the dressing-up holiday of the year. (A friend on ITFF commented "it's like a My Little Pony!" and yes, especially the Gen 3 ponies, a lot of them had parti-colored hair.)

(I am half tempted now to get some of the mint green, if I can find it, and wear mint green and "Sugarplum" to Christmas parties this fall.)

But other than that, no. Not even going to try to hand out candy; I am tired at the end of the day on Thursdays (Thursdays are the worst day for me; I think that's when all the tiredness from early in the week hits, and it's still not the end of the week yet). Last year I had one trick or treater, and this year it's supposed to be cold and wet, so I think I'm going to sit and knit and watch tv with the lights off instead of spend my evening prepared to jump up and hand out candy.

I did opine earlier that it would be nice if there were a haunted-house "alternative." I dislike being startled even at the best of times (mostly that is what haunted houses are - startling people and trying to be gory). And without a significant other to grab onto when you are scared (which I am convinced is at least 80% of the "fun" of haunted houses), they are not fun at all.(And going alone? No thanks. I went once or twice with a group when I was a lot younger but. eh meh, not for me.

The alternative I suggested on Twitter was a house with "nice surprises" behind every door - so one room would be full of (well-trained! Maybe therapy-dog quality) puppies you could play with, and another would be a decorate-your-own-cupcake bar, and another one would be an adult-sized ball pit. And I could also see, oh, I don't know, rooms with nice music and soft color-changing lights, and maybe one that has those claw machines with fun prizes in them, but the machines are rigged so that everyone wins at least one thing....

Because yeah. This whole second half of 2019 has been too much of a horrorshow and at the best of times I didn't like horror movies or scary stuff. And even absent that, there aren't enough nice surprises in life when you are an adult, I think.

And I am ready to move on, leapfrog over all this into Christmas. Yes, I know people complain about "too early" but this year it is not too early for me. Even Thanksgiving is going to be fraught this year, and it used to be a favorite of mine - a quiet pause before the end of the semester where all you had to do was show up and help a little with the cooking. But this year....well, maybe once Monday the 25th is over, especially if most of All The People depart for their own homes, it won't be so bad, but....yeah. I will want to run straight into the arms of Frosty the Snowman and Rudolph and all of them afterward.

And I was also thinking at the JoAnn's this weekend, how Hallowe'en low-level has a death theme to it, but Christmas, if you think about it, at least from the Christian perspective - it's a life theme. A new baby is born! And what's more, for believers, this baby is the Light of the World, the Savior of humanity... I once opined that people seemed, these days, to be either #TeamHalloween or #TeamChristmas, and if you're a big fan of one you are less interested in the other* and I am most definitely #TeamChristmas. Oh, I'm happy so many people enjoy Hallowe'en, I just know it's less for me. (I still think of it as "a holiday for kids to dress up and go get candy")

And just the difference in color schemes. Hallowe'en tends to be dark - black, orange, poison green, purple, sometimes dark red - but Christmas can sometimes be a little gaudy and while red and green are traditional, I've also seen pink and mint, or pink and turquoise, or rainbow colors, or even lavender and silver....all different combinations, and a lot of times there's a lightness and brightness, and that may be another reason why I am more drawn to Christmas; I like things that are bright and even a little gaudy.

(*And I've encountered people who are openly hostile towards the celebration of Christmas and fine, they don't have to partake, but please don't try to poop on it for those of us who do love and need the holiday in our lives)

But this year, especially, I need that light and hope and sparkle in my life.. Both the religious celebration of Christmas, and the more-secular aspects of it (of glitter and sparkle and little twinkling lights and fancy cookies and toys and festive clothes and snow and all of it). Even if my mom isn't up for doing much, I am going to try to at least get out on my own and go see Christmas decorations when I'm up there, and I have a couple new cookie recipes I want to try (maybe even make them down here, to bring in during exam week).

And I am knitting all the things. I'm still working on the second pair of socks for my mom, but I am going to knit an Antler Toque for the AAUW gift exchange (might start that this week) and I decided to knit a hat for my brother and ordered some plain, dark-brown superwash yarn (for him, it has to be superwash) for it.

(And I have....a Plan....for something for a January gift exchange I do, and I am really hoping I have time to get it done because it's such a perfect thing for the person)

I am combining my comments from your last 2 posts.

The hair chalk is MAGNIFICENT! my niece tried hair chalk on me and it was so blah.. and yours is so vibrant! I love it. And I hope it gives you a tiny bit of cheer this week.

I am so glad the quilt lady could take your quilt. I really want to do a LA quilt but I am confused by all the rules (I have been told that some LA-ers get really ruthless about "absolutely square" and "perfectly ironed" and frankly.. I am too much of a dim bulb sometimes to find out later I pissed some person off in a way I wasn't expecting. Maybe if I had more of a relationship with some quilt shop I would feel like I could ask questions. Maybe one day.

YAY to finding a cute little antique store to get little gifts in.

And I look forward to making cookies every year. It is one of my favorite things.

The violet hair chalk is perfect.

When I was a kid I used to think handing out candy would be fun but for a while we lived in a neighborhood that was extremely busy on Halloween, almost a constant stream of kids and it just didn't seem as fun as I thought it would be so now I'm glad we never get any trick-or-treaters. Over all, Halloween? Not really a big fan. I don't really dislike it but there's nothing about it that appeals to me.