I dropped it off today. It's nice once again to have access to a place that does more complex designs (and has the machine - so also the thread for it - onsite, so you can hold up threads against your top and pick the one you want). 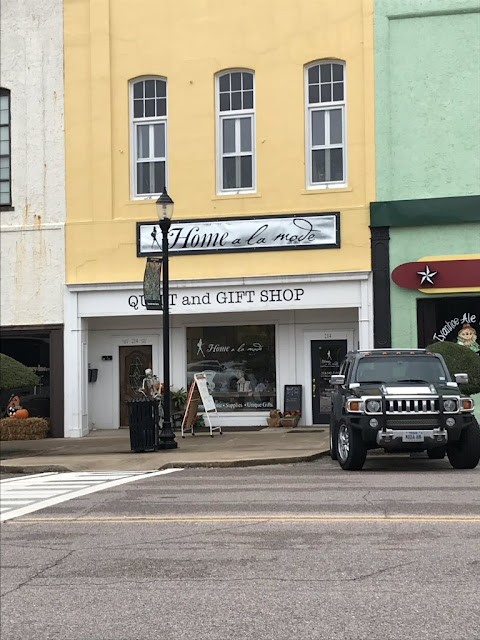 I am having it done with a butterfly-and-flower pattern (which is denser than some patterns, and the woman was quick to remind me it was in the "more expensive" section of her pattern book. But you know? The total cost of quilting (with thread and batting too) is about $120, and it's worth it to me to have what I particularly want on it). The thread is a color called "beach glass," it does match the light turquoise prints in the quilt, so I think it will look good. (And yeah, that's maybe a little bit of privilege I enjoy: I have enough money for things like this that choosing a more-expensive, more-elaborate quilting pattern is no problem for me, I can have it if I want it)

It'll be done in January. She was relieved when I said I didn't need it for Christmas, apparently she's on a lot of deadlines there. (You don't pay until it's done, though I did buy the batting from her today for it. I don't know if that means in the future a person could bring their own batting, but hers is reasonably-priced enough).

I also went to a newish (well, new to me) antique shop a few doors down - wow, it was nice. I don't remember the name of the place now (Edited to add: it is "301 Mercantile" and they have lots of antique furniture and "architectural" stuff, but also some small items and "vintagey" but new gift items) It was in the same block where the big fire was a couple weeks ago; one of the women in there was talking with someone about how scary it was and I can imagine....I hope everyone was paid up on their insurance. (I don't know if they've found a cause for the fire yet but I'd not be surprised if it were electrical, or solvents plus electrical - it started in a nail salon).

They also had some gifty type things and handmade soap. I bought a soap called "Hippie Chick" (it has patchouli in it, and you know? I've decided I kind of like patchouli. Maybe I am in some ways  a bit of a hippie chick). And they had some inexpensive sparkly (because faceted) bead necklaces and I bought a brownish one and a turquoise-and-gold one because sometimes I just like popping on a long necklace, and I like things that are kind of sparkly.

Definitely will be going back there, especially as I look for gifts. 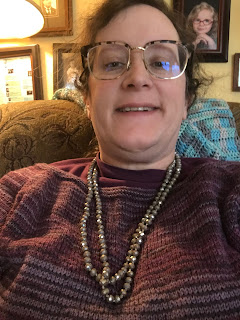 They remind me a bit of some vintage 30s necklaces I've seen, but these are new - they are glass beads that have been painted/electropated with something sparkly.

And from there, on to the "corporate" shopping, but I do think now I'll make more of an effort to get down to Denison when I am looking for "fun" shopping because they do have a lot of nice stores. (They poached away our good Main Street person, and it shows - our Main Street has declined, theirs has gotten better)

JoAnn's was having a big sale (50% off in some cases) on quilting fabric and....I bought a bunch. I'm thinking of quilts again,  and I have a big piece of a large unicorn fabric that I wanted a fantasy fabric to use with for a very simple two-fabric (plus white background) quilt I have a pattern for. And I found this: 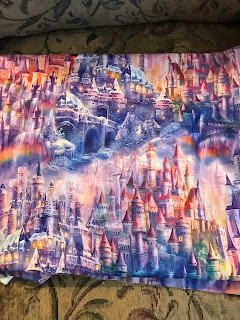 Castles! (though one looks something like Hogwarts, and I checked to be sure it wasn't a Harry Potter fabric). As long as it coordinates as well as I think it will...it will look good. And that might be my next quilt top after the one I'm currently working on.

And this one, along with a couple of coordinating ones from the same line, with the thought of using up my "cute woodland animal" fabrics (deer, hedgehogs) in it: 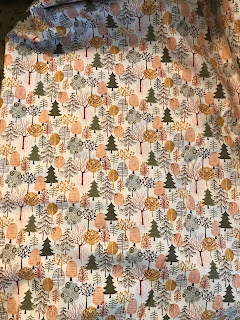 I think maybe part of this afternoon will be washing the accumulated fabrics. (I have others from some other recent trips - I never washed the ones from Kaleidoscope, and I was there back at the beginning of September!)

I also bought a couple tiny simple craft kits-for-kids - one for felt unicorn tree ornaments (you glue the pieces together) and another for shrinky dink sloth tree ornaments, and a punched "vegan leather" (I don't know exactly what that is) bracelet "blank" to be cross-stitched on. Because I thought: maybe I need some small fun projects that I can do in a short period of time and that don't take a lot of energy, but still want to do something. And it helps A LOT to have things you can complete in a short time, unlike a sweater where you might knit a couple rows on it in an evening, or handquilting where it takes months (at least) to finish something. That maybe I need to balance the long-term (deferred gratification) projects with ones that are closer to instant gratification. And maybe that's part of my distress: most of the "important to me" things I do take a very long time to see progress on - research, quilts, sweaters, improving at the piano, even trying to do a little writing. And while I know being able to tolerate deferred gratification is a good thing - the infamous marshmallow test for example* - life is hard enough that sometimes it's nice to spend maybe an hour doing something, and at the end of that hour, having something to show for it. And something REAL, not, for example, a batch of graded homeworks, where you will hand them back and they will be gone and you'll just have another batch to deal with in a week.


(*Though there have been some questions about that, that kids from secure families (both in the sense of their parents not being awful, and in the sense of the family being fiscally secure) do "better' at deferring gratification, and that some of the kids who "couldn't," weren't doing it because of any weakness in THEM, but because their lives had been unpleasant enough to teach them: grab good things when you can, because there's absolutely no promise, no matter what that adult says, that not taking one marshmallow today means you will get five a week later)


I also got a couple skeins of Paton's wool in a pretty blue and now I want to look in my patterns for a quick but pretty hat pattern - that might be the AAUW gift-exchange gift. I kind of have a tradition of making something (the price limit is supposedly less then $10 which means the women with time to really aggressively shop sales can find better stuff, so for me, the route of making something from "$10 or less of supplies" and not counting my time is a good thing)

I'm also thinking of pulling out my long. long stalled hexie handpiecing project again at some point. Maybe I even take it with me at Christmas - I have LOTS of hexagons cut, and I might even be able to get a few more out of scraps of fabric my mom has up there.

But yeah, maybe I'm starting to pull out of the stall, I hope, and will feel like actually doing craftwork again. My plan this evening is to try to at least get through the heel turn on a sock (the second pair I'm making my mom for Christmas)

I also have to hunt around in my cookbooks; I bought some bone-in, skin-on chicken thighs to cook up tomorrow and I have to figure out something more interesting than putting a spice rub on them and then eating them with barbecue sauce when they're done....maybe some kind of fruit-based sauce? I'll  have to look.

Also, spotted on Twitter. This is a poem that ran in the New York Times earlier this year, apparently. The author is Danusha Laméris, a poet I am not familiar with. But I like it, and yes, I feel that it is true: 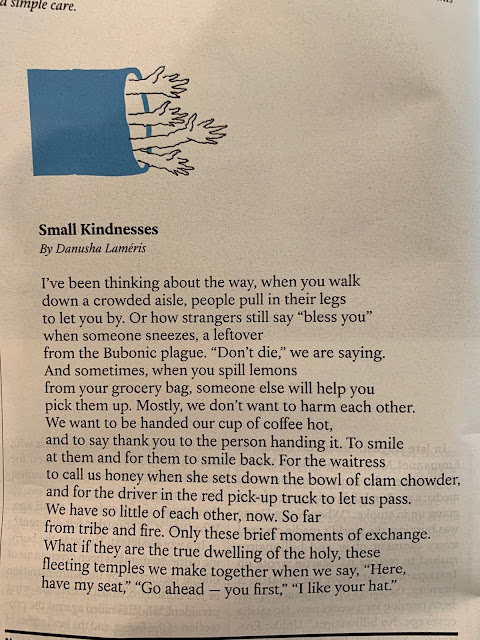 "So far from tribe and fire." One of the issues I have is that I don't really have a "tribe," in any sense - I live alone, outside of maybe my fellow-congregants I am not sure there is anyone who would defend me against harm if everything collapsed. But I try to make that tribe, or at least show myself as an outsider who is friendly and does not pose a threat. And really, humanity should be all one tribe, but one of the weaknesses of humans is that we want to carve ourselves up into "us" and "them"

And yes, the "true dwelling of the holy" - I was thinking today of how there seem to be competing ideas in Christianity that I've seen; where some groups within it are bent on withdrawing from the "world" as much as possible, and, I guess, waiting on either the Second Coming* or the Afterlife, because that's the Kingdom of Heaven, and then things will be right. And others - and this is more traditionally the congregations I've been a part of - have tried to do what they can to bring a little bit of the Kingdom of Heaven here and now. And I admit, with all the loss in my life lately, and some sad old doubts reawakening....well, if maybe the here and now is all we have, shouldn't we strive to make it as good for everyone around us, and ourselves as well? All we know we have is this day, and so it probably behooves us to be both happy and kind in it.

(*At one point in my childhood, we briefly attended a church where a lot of the members were really hot on the "End Times" ideas, where the faithful would be raptured and the rest of us would be left to wait out the horrible things that were to come, and I admit as an anxious child, that thing scared me a lot - what if I was one of the people who realized one day "Hey where is this person? And that person?" and then realized with dawning horror that they had been raptured away and I hadn't been "good enough." And based on my Bible reading as an adult, that doesn't seem a *terribly* Biblical thing, or at least, it's a stretch of stuff John of Patmos wrote, but....I remember being uncomfortable with it as a child. And I would so much rather be the person working in a food bank or welcoming a newcomer or doing something in the here and now to try to make someone's life here and now better, and not to build up Good Place points for myself so much as....well, because I would like other people to do the same for me.)

Posted by fillyjonk at 3:58 PM

I TOTALLY agree with your last paragraph. I've been there!

I love old downtown buildings. The red brick ones are my favorite but that yellow looks so happy and welcoming.