* Yesterday was just busy. Three lectures, a lab, two evening meetings at church....I was WIPED when I finally got home.

* Also, I didn't realize it at the time, but it seems likely I was brewing a small stomach virus. (HOW, I ask you, HOW? I mask up in public ALL THE TIME except when outdoors). But I had chills last night (took my temperature, it was actually a degree below normal for me), was SUPER tired, had sort of abdominal upset, some, ah.....other issues....but never vomited, and the lack of vomiting and the fact that I'm not close enough to anyone to pick up germs made me worry it was something else, either a new food intolerance, or something structurally wrong with my intestines, or some other bad thing

but then my next-door colleague mentioned that she had been sick (and yeah: she looked pale and was drinking Gatorade to try to rehydrate). She thinks her kid brought it home from daycare but noted that it's around out there (and I've heard of other people having it). When I heard that I felt a lot better; knowing it's a self-limiting minor virus makes me stop worrying if I have some weird hematoma or something going on somewhere, or that some new food was poisoning me. And I feel mostly-better now, was able to eat a normal lunch. (I think I will take at least one more day off working out to be sure I'm fully healed up)

* I'm close to the end of "Gaudy Night" and I admit I will be sad to see the book end. It's been weirdly comforting to immerse myself in that world - for one thing, it's kind of a 'school story' and I guess I've always felt comfortable on educational campuses. But also, the interactions between Harriet and Peter (and every fiber of my being screaming at her "SAY YES TO HIM, SAY YES YOU FOOL"). They don't make men like Peter Wimsey - maybe they never actually did but that kind of charming, kind, witty figure is nice to daydream about. (Yes, I know, the book is dated in some ways, I tend to be good at ignoring that sort of thing). But also the sort of petty squabbles and unkindnesses that crop up in a group of women trying to work together - that feels very true to life to me.

I'm not QUITE to the point of "who did it" yet but I'm pretty sure of who it is.

I suspect the other Wimsey novels are different to this one, but I also think I want to read more. I believe I have a copy of Murder Must Advertise on the shelf somewhere, and that might be a good one to try (without investing in the others in the series, as much as I'd like to read the series in order now, though I guess Gaudy Night is one of the later entries in the series anyway)

(Ah, and looking up the series, I did "spoil" a bit to myself about "do they ever marry?")

* I may choose a different sort of book for the next read. I have a set of Arthurian-themed YA novels (I think "The Seeing Stone" is the first in the series) and maybe that would be a good "fall is coming" read. I find these days I don't have a lot of comprehension for difficult books (so some of the older, "good," literary YA fiction is just right) and especially no tolerance for violence or hopelessness/nihilism. Oddly enough a lot of older mystery novels DO work against that (And some modern ones: I read an article the other day (can't find it again) about PD James' faith and how it influenced her mystery novels: something about how there is not a hopelessness there, that there is a chance for things to be restored. I get a similar feeling from Louise Penny's Inspector Gamache novels - that there ARE good people in the world, who strive to do good, to help people find reconciliation and forgiveness, and yes, hope. (at the end of one - I forget which one it is, and yes, this is a spoiler, but - a troubled-but-beloved colleague of Gamache's redeems himself, goes through recovery, and winds up marrying someone he loved for a long time - and I cried at that scene. Not because I was sad, but because....it seemed so right, and it was a world with HOPE in it.). I don't know what (if any) faith Penny has but I get the feeling she must have some sense of a bigger purpose to this life, because of how she writes. (She is one of my favorite "modern" writers - perhaps my absolute favorite, I don't read many "modern" novels)

* I have to get a copy of the old "Burrito pillowcase" pattern again and remember SOON to make the parakeet and parrot patterned pillowcases for my niece's birthday (which is next month). I got a nice nature-themed birthday card for her at the Chickasaw visitor's center.

I thought a set of pillowcases would be a nice gift - she's going to be nine and I never know how "sophisticated" kids get at a young age. I was not at ALL "sophisticated" at nine and would have wanted more stuffed animals*, but I have heard of kids that age putting away most toys (other than video games or sports gear) as "babyish" and....yeah. I don't want my gift rejected or to be seen as an insult. But pillowcases? Especially in a fabric that features one of her special interests? That should be good.

(*heck, at 52, I would like a stuffed animal as a gift on a gift-giving occasion)

* That might be a weekend thing. I pushed hard this morning (before giving an exam, so no class prep to do) and wrote the three forms of the take home exam (mostly by making the key for one in Excel, and then just cutting and pasting and changing the numbers for the other ones) for the stats class - that's next week. Tomorrow I can grade the exams I gave today. Because more and more I feel like I need to free up weekend time for my own things - either to make stuff, or to work around the house, or - in a few weeks - start up again on sampling.

* And at some point I need to remember to weave in the ends and block the parts of the Pocketses vest, and then make the pockets and the front and sleeve bands. One thing I have noticed recently - I HOPE it's just a stress thing and not an aging/cognitive decline thing - but if I have something out of sight, I often forget about it. Which is why I bought myself a whole day planner 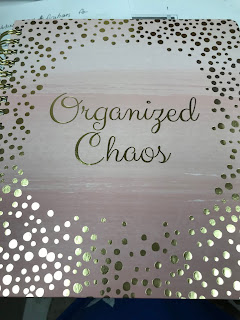 Which I keep on my desk and work and write all the things I need to do down in it so I don't forget things. (And yeah, it borders on what's sometimes called "toxic positivity" in some of the messages, this was for the start of September: 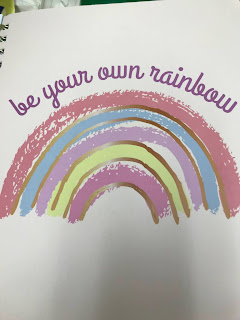 1. What does that even MEAN?

2. I'm not sure I have the energy for that some days, it would be nice to have someone HELP be my rainbow a little bit)

* Torn between the desire to keep working on Incunabula so I have a prayer of getting it finished in time to wear this winter, and start some whole new thing.

Posted by fillyjonk at 2:02 PM