Really hoping the first two days of 2021 have been a "dress rehearsal" (in the old theater superstition sense of "a bad dress rehearsal means a great opening night") than an omen for the coming year.

I didn't do much of anything yesterday; I was tired and cranky from all the noise in my neighborhood. Didn't really do anything.

Today, I figured: I better do something. Better at least get out of the house for a bit (I wonder if there's "bad air" in my house affecting me).

But first, I filed a "lost package, I want to claim my $50 insurance" on the present for my sister in law and niece, which has not been heard from since the day after Christmas. If nothing else, IF the package still exists, it might get shaken loose? Or maybe I get my $50 at least, even though the value of the gifts was more than that. It was involved and in the end I valued the toy wombat at $0 because what is a person's time worth? I don't know.

And then, annoyed, I thought, "Well, maybe I go to the small local toy shop and just buy her something and send it UPS this time." (I had thought of going to the local quilt shop, but they went back to their "pandemic hours" and aren't open weekends now, this was on their Facebook page).

I thought to check the toyshop's page, and there it said: open 10-4. Okay, fine.

Went down there. Nope. Sign in the door: we are closed until the 5th for inventory.

Look, I don't have a problem with small businesses taking vacations but if you have a facebook page, MAYBE  you post it there? I tried a couple other shops and most of them had closed on the 21st and wouldn't reopen until next week. (Ironically, there is a big push here to "Keep your green [money] this side of the Red [River]" because so many people go to Sherman to shop but you know? If literally the only thing open is wal-mart - that's NOT keeping the money in town!

I did find an antique store open and found another house-shaped teapot but have not yet unwrapped it from the protective materials. And then I walked back down to my car another way....and found someone's debit card on the sidewalk. And I thought, now what? I wanted to hand it in somewhere, even though 9 times out of 10, the person cancels it the moment they find it's missing, but I also didn't want to leave it. The bank nearby was closed, of course....so I asked in another small shop and she suggested the police department and I went where I thought it was but it wasn't there, but I saw the county sheriff's office. There was no one there and frankly at that point I was sick of what was probably a fool's errand and also I am kind of soured on humanity these days and started to feel like "why even do this? someone wouldn't do this for you" and in the end I just slipped it through the gap in the doors, they won't know what's up but at least no one can use it. I tried to do the right thing and I failed.

I decided to go out to Lake Durant and walk for a bit - I'm trying to get exercise every day so my back doesn't seize up, and also I KNOW I have failed to lose the weight I should have. But it's hard when there's so much sitting with teaching online, and literally one of the few pleasures left in life is cooking and eating. 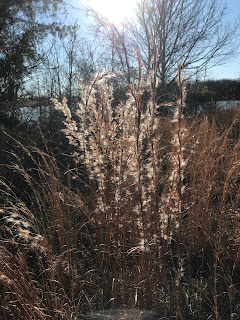 I didn't go as far as I normally would because it was late-ish in the day, and also I heard dogs barking and could not tell if they were tied up at the houses near the lake, or loose, and I had no desire to tangle with a loose dog. 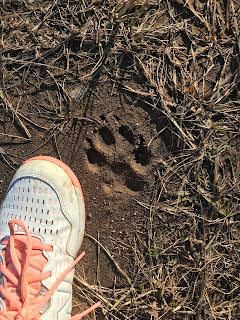 I HOPE this was a dog someone had on a leash. I am not good at tracks and sign but I think that's dog. We do have coyotes around here and it's rumored that there COULD be mountain lions. Though I think the claw marks suggest against that?

Anyway. I turned back after only walking about 15 minutes (so: a bare half-hour total). Also there were slick spots from it being wet and I didn't want to risk falling. I am tired of not feeling safe ANYWHERE except locked in my house or locked in my office but here we are.

Still, I am surprised at how disappointed I was over the toy shop being closed. I admit I had half thought of buying MYSELF one of the small simple craft kits, just to have a different experience. That's one thing my life of late has really lacked, and I feel it - no new experiences. And watching stuff on a screen - well, no matter how cool or educational, it's still watching stuff on a screen.

I also admit I'm feeling considerable dread about the coming semester. Not just the "good Lord there's a new, more infectious mutant strain out there" but also the "holy crap another four months of fighting with BlackBoard and having students demand infinite extensions on things because they are 'stressed out,' never considering for a moment that their professor might be stressed out and having less time in which to get things graded before midterm or final grades are due is itself a source of stress."

Posted by fillyjonk at 4:52 PM