At least by now I'm merely tired (I am trying to increase my minutes-per-day of exercise) than sad, which I was earlier.

I've got the tree up, and I have my presents under it (and I am still disappointed that my sister-in-law's and niece's presents are in limbo somewhere; I hope they get them eventually). I've got my steak for tomorrow and an idea of what to serve with it. I didn't bother to make a dessert (I contemplated doing flourless chocolate cake) but I have cookies and my mom sent me a box of Aplets and Cotlets.

But it doesn't feel right. Because I'm not in the "right place."

I went to church this evening. And again, it was different - and more different than it would be in a non-pandemic year (much shorter service, we were all masked, communion was different.) I went early to help light candles and then found out I had signed up to light candles AT THE BEGINNING OF THE SERVICE and not before and of course my hands went shaky but I managed to do it. (And I got snapped at, a little, by the woman in charge because I did not know how we did it there, because this is literally the first year I have been here but instead of snapping back at her about that, I admit I just turned away and teared up a little.

I made it through the service okay. Teared up at a few points. It helped to think of this TikTok I saw earlier:

I pictured those cats erupting out of the room, and that made me stop wanting to cry.

But now I'm home, watching "The Bishop's Wife" for the second time this season,  and might pick up the socks I've been working on: 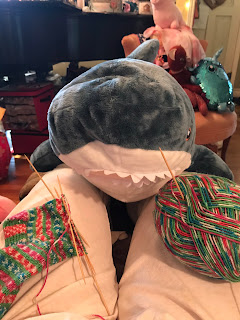 That's also Blåhaj (or more likely, a rip off version - I bought it off Amazon rather than from IKEA, because IKEA will not ship here and wanted me to go pick it up in Frisco). But that's okay, he's a similar model, I guess, and he's big and squishy and feels enough like a cat or small dog in your lap. And those are the Fairy-Light patterned yarn socks, just farther along. I had hoped to finish them for Christmas but I didn't; I don't seem to knit as fast as I once did.

But anyway. I have enough food and the power is on and the heat is working and I've got presents to open tomorrow morning and I worked my exercise schedule so that tomorrow is a rest day so things are pretty good, even if they're not quite as good as what "ideal" would be.

Posted by fillyjonk at 8:23 PM

Merry Christmas! We are still waiting for the package from our daughter in MD as it went from DC to CA and hasn't been heard from since. Our package from our third daughter was mailed from 33 miles away in MA and is still in limbo. The Penzey's website says "It's not late until January 8" so here's hoping yours and ours arrive by then.

The presents to my sisters I didn't even BOTHER to try to send, but I had sent them each e-gift cards, so there's that.