Different this year. I was thinking about how as kids, my brother and I would be up EARLY (I think that is true of many kids). Also, like in many families, the deal was we could not go down until our parents were up and had gone down (my dad always claimed it was that he wanted to turn on the tree lights, and some years set his camera on a tripod, but I suspect it was to take a final look to be sure everything was set out right from "Santa"). Usually we were up by six, and down before seven.

This year, I just slept in. I think I got up after seven - I've been sleeping later recently, because I use an eyeshade now and I don't get awakened by the sun. (I will have to slowly work my sleep schedule back to some semblance of "normal" for me for the spring semester. I don't *think* I have an 8 am class but I should be over there before 8, which means getting up at 5 if I am to work out.

Turned on the tree, turned on the computer. Checked my e-mail, did Duolingo. Slowly worked through the pile of presents - one thing I learned from childhood was not to tear into everything at once because that means it's not over so fast. (In my family, growing up, the tradition was we alternated - first one person unwrapped a gift, then another did, and all around the family until the last gift was opened. Well, we did stockings first - of course I did not have one this year). I had a few things I had bought for myself (some "surprise color" sockweight yarn, which turned out to be a yellow-to-green gradient that would work nicely in a shawl - it is three skeins - so eventually I will find a pattern, probably for a triangular shawl that will work with it) and a "Snow Dragon" from Squishimals: 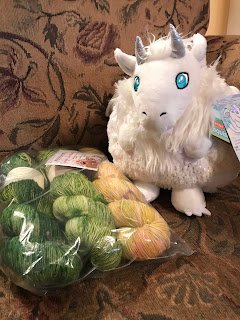 She was kind of an impulse purchase but I'm glad I bought her now. (Part of the deal was the company donates a comparable toy to a child in need). You can't see it in the photo but she has silver sparkles in her fur. I have not named her yet; I had thought of "Elsa" but that seems not to fit, I think I want a more "nature themed" name and should maybe look at the list of various wintry precipitations to see if something fits.

You can also see the yarn there - it was a grab bag purchase and the dyer chose well, they are skeins that coordinate nicely so I will use them together. 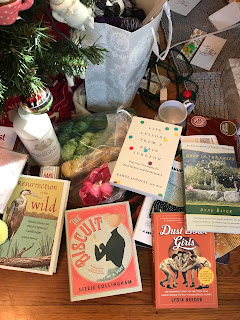 And there were other things - a tea chest with tea from a friend, a mug (you can see the mug) and pink yarn.

And a pair of flannel pajama type pants 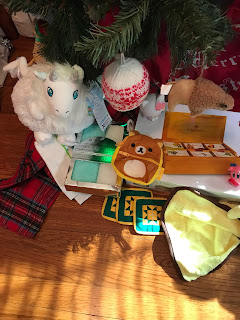 Which I washed up and am wearing today so that the Yule Cat can't eat me.

I had also saved a couple of the Gachapon crates and a Doki Doki crate to open so there were more things. So it was pretty good.

I also got a generous Herrschnerr's gift certificate, so once I've finished an ongoing project or two I can order more yarn (I am going to wait - give the USPS a bit of breathing room, and also, I have a lot of yarn ahead now). The certificate is good through 2025 and I haven't heard anything bad about their financial state (in fact, they seem to be doing pretty well), so safe to wait for a little while.

I also cooked Christmas dinner for myself. Not really the first time I did (most) of the cooking - in 2016, when my mom fell on ice and (we found out later) cracked a rib, she was in too much pain to cook, so I cooked the full dinner, though at that point I had her able to give me directions as to what to do.

This year, I did a simpler dinner myself. The biggest thing was popover-style Yorkshire pudding (preferred that way in my family because more crust and less flabby than the "do it in a big square dish" kind) 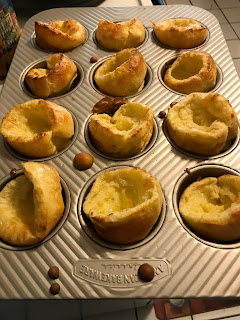 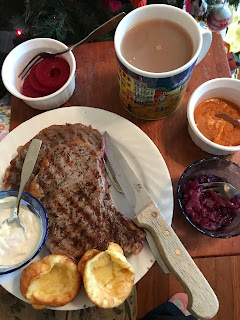 The full dinner was a steak (I only ate half) and sweet potato, red cabbage, apple rings, and, since I was eating this early enough in the day not to affect my sleep, a cup of tea.

I watched (for the umpteenth time) "A Christmas Story" while eating. Had I been in Illinois my mom and I would have talked over dinner but alone, there seems less of a point. I could have put on music, I suppose.

I knit for a while, watched most of "Paddington 2" (better even, I think, than the first one) and then went to bed and finished reading "The Christmas Egg" which was an odd but enjoyable mystery novel by Mary Kelley.

Today was Zoom knitting group; tomorrow is church. Monday, I think I will go back in and work on the new manuscript - I've had enough idle days, it feels like. If the weather is good I might go dressed to be able to walk and take a few turns around the walking trail on campus or even drive out to Lake Durant and walk there when I get done.

The year - this terrible year - ends next week. I am hoping I can find sparkling cider or white grape juice to ring out 2020 (I am not a drinker). Not sure what I will EAT - the smoked salmon pate I bought for Christmas eve did NOT agree with me....and I'm tired of chicken.

I wonder if pizza goes with sparkling cider....

Posted by fillyjonk at 5:29 PM