Unlike any other year, though: I'm here, and will be by myself. In a normal year, if for some reason I couldn't travel, I think someone would have asked me to their house.

I'll be okay - I can face-time with my mom; her plans for the day are to talk to all the various relatives and neighbors of hers are going to share their dinner with her (she was invited over there but declined - because of wanting to talk to her own relatives). I have a Dungeness crab macaroni and cheese dinner on the way from SeaBear (I've ordered from them before, and I've already had word the on-ice shipment is on its way to be here Wednesday).

I'm picking away at cleaning up the house (well, at least the living room, and redoing some of the kitchen) so I can to Christmas decorating later this week. I am going to (temporarily, at least) move the "work books" bookshelf into a corner of the dining room, and slide the coffee table over near to my chair, maybe for the nativity set, or maybe - if I can keep it far enough from flammables - for candles.

I have one of my amaryllis out already because it seems to be making an early go of it: 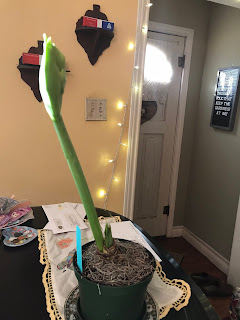 This is supposed to be the pink and white striped one; there's also a red one and a pink one, but they're much less far along. I will find protective plates to put under them and move them there as they get more sprouted.

I also started the little toy for my niece - I decided to make the wombat, because there is a Fun Wombat Fact I think she will enjoy: they poop cubes.

Tomorrow I should go in to my office a bit but I want to get more things cleared up for the eventual decorating.

You need what you can do to stay happy in all of this. Oh, it helps knowing that probably by the middle of next year many of us will be vaccinated against this thing, but it's still hard.

And the news/stuff isn't helping:

1. This week is the one-year anniversary of my dad's memorial service, which....that means it's almost 18 months he's been gone, which seems barely possible.

2. I mentioned, I think, the 18-year-old killed in an industrial accident? One of the young men at my church was a good friend of his and wound up as one of his pallbearers. I can't even imagine being 18 and burying one of your friends who is the same age as you.

3. A friend of mine at church, her husband went into hospice this weekend (I am not sure what all his health issues were, he had not been well for over a year) died this morning.

2020 has just been brutal and it keeps coming. And yeah, I'm trying to be resilient, but I do get caught up in sadness periodically - this morning I woke up, for some reason, thinking of the Ray Bradbury story "There Will Come Soft Rains" (and the *really* unsettling Uzbeck-made animated adaptation of it - it's on YouTube) and was sad for a while and, I don't know. (I do know I don't want a "smart house")

But I did get a lot of stuff put away today, and did all the accumulated laundry, so there's that. And I did the week's grocery run so I'm set until the weekend, maybe, or maybe even further out. And this time, I don't know if people are beginning to take things seriously or if a different crew shops Monday mid-morning than weekday afternoons, but about 90% of the customers had masks on.

And I don't have to get up at any set hour, which helps - I wonder if some of my distress is just that we all need more sleep now, and I was also staying up later than ideal for a 5 or 5:30 rise time - some nights when I got home I was just so frazzled that I had to do dumb stuff (phone games or hanging out on Twitter) first and then buckle down to do something more productive....and I sometimes wound up staying up past ten, which isn't good when you're getting up at five and also it takes you a while to fall asleep and you sometimes wake up for a while in the middle of the night....

I also plan on watching a lot of cartoons and similar this week. I am hoping TCM starts their rotation of classic holiday movies soon, that will be good. too. I figure since I'm not traveling, not going out  anywhere, and we've now broken from in-person class until January at least, there's not that much point in me keeping up with virus news - I know it's bad out there but I know a vaccine is coming, that's probably enough to know. So maybe I just watch fun shows and knit or crochet and get a few projects finished between now and January.

(Next week there ARE classes, but in three of my four classes I've finished all the material and am just going to do a review in each one. I do have an exam to write but that's for tomorrow, and I'll have some grading next week to get done. Three of my four finals are ready; the fourth I need to type in. But not having to fight with the camera/microphone in different classrooms and remember all the things I have to do and bring and take care of (the seating chart. I think next semester I am going to use colored pencils and just code each day a different color - fills the chart less quickly and easy to see at a glance who was present on a given day).

I guess one thing to be grateful for? I didn't get infected this semester on campus, and there weren't outbreaks in my classes, and I didn't even have to quarantine. I wasn't expecting us to make it to Thanksgiving in person but we did - it was close a couple times (a colleague had to get tested but got a negative result, her office was right next to mine....)

Here's hoping by some miracle case counts drop by January...

Posted by fillyjonk at 9:50 PM