These came several days ago, but I didn't take the time to open them. This represents me "buying back" a part of my childhood, in a way.

I've taken to browsing the "vintage tree ornaments" pages on Etsy every November now, looking for nice, older ornaments to fill in on my tree (though now, I think I have more than I can fully fit on it anyway). And I saw these: 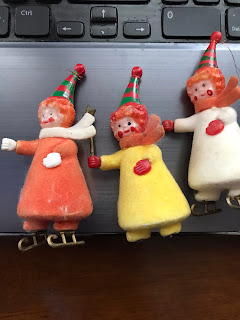 I remember these vividly from childhood. The seller claimed "they might be 60 years old" but unless the BEST store was selling off old stock I *know* they are closer to 45 or 46 years old. We bought a lot of our tree ornaments in the 70s from the BEST - they had a good selection and unlike their usual trade, these were out on display to be purchased directly. (BEST was one of those catalog-showroom stores: one example of the item was on display, and you filled out a little tag and gave it to an employee, who then arranged for the boxed-up item to be brought out from the warehouse).

BEST was actually....a really good store in a lot of ways. My big Mickey Mouse cookbook came from there (also something my dad bought - he saw me looking at it in the store and asked me if I wanted one, and I said yes, and he bought it for me, I guess figuring I was the right age to start learning to cook. I think he did similar but with a different book for my brother a few years later). And they were where I saw the lady-in-the-rain lamps, which I simultaneously thought were kind of cool and also knew my classmates would find incredibly tacky. (But "tackiness" is fun some times! I don't like minimalism)

I think BEST was one of my dad's favorite stores. I think it was partly because the prices were good but also more that they had a really wide selection of things.

(Also, later - they carried some toys. I remember when I collected dolls, this would have like been in high school, and the 80s version of the Alvin and the Chipmunks cartoons were on, and they had the "girl" versions - I bought a Jeannette Chippette doll because I always liked her. I still have the doll, too, up in my room at my mother's house)

Anyway. These came from there. They were on our tree for years, and I'm pretty sure at least one of them still exists in the boxes of ornaments at my mom's. I always liked them. I realize now that maybe they are supposed to be clowns? With the hats and the red cheeks? Weirdly, when I was a kid, I thought of them as fairies - they had magic wands (in this set, only one remains - and I think we lost a couple from the ones my parents had). And with the three of them - I guess I thought of them as Flora, Fauna, and Merryweather from "Sleeping Beauty," which I had seen with my parents at the "cheap theater" (on the Akron campus, one of the auditoria used to show family movies on weekends for a very inexpensive entry price - usually older Disney features - and we went A LOT. That's where I saw the Love Bug movies and I think the original That Darn Cat)

But anyway. When I saw them on Etsy it was like falling back through the years. And I decided even though they were imperfect and the seller noted that (two wands missing, one has lost her skates), I still wanted them. They have their original box, which I will keep to store them in...

But yes. My plans for next week involve spending a little time every day cleaning up, starting with the living room here, and towards the end of the week, I want to put up my tree. Oh, yes, I am doing it even though I know there will be things about this changed season that make me sad.

(Heh. I think of that bit from "Meet Me In St. Louis" where Tootie goes wild with anger and destroys the snow family she made, because she doesn't want to move. I feel that a little some days now).

But maybe having a cleaned up house (I still need to attack my bedroom and the guest room, I think my goal should be to do a room or two a day - the kitchen and the dining room won't need much, nor will the bathroom and hall) and then have my decorations up might make things feel better. And also make a place where I can safely put out candles in the evening - I have a coffee table I don't use much - and that would be nice, too. And I have my little Moomin "spinning top" that spins in the heat from a candle.

And maybe all that will help. I don't know. I also think I will try to watch all the light, fluffy holiday programming I can find, and also the vet shows, and maybe cooking shows. And knit, and crochet - already I am planning a toy wombat as part of my niece's gift (I chose that, because I can also share the fun wombat fact that their poops are square. Yes, they actually are, they make cubic poos. My niece is 8, she will probably enjoy learning that).

Posted by fillyjonk at 2:23 PM