Yeah, actually. I thought I'd be lonesome but it's been good so far - Monday I cleaned house a little, today I went over to work (I was the only one there) and caught up all my grading, and posted the final exam for one class to BlackBoard (it doesn't come available right way). And this afternoon I wrote half of the last hourly exam for my intro class, will probably finish that tomorrow, along with clearing the space for my Christmas tree and then maybe Friday I decorate it and put the other stuff out.

Also, I've been sleeping better: I haven't had any stress-dreams, and I wonder if I was really more anxious about being over at school during the pandemic than I thought.

Like, this is the notice I have had up inside my front door, as a reminder, since August: 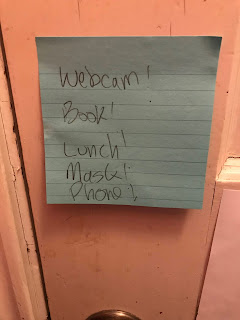 All the things I needed for a given day. Well, also, my filled water bottle, but that also fitted with lunch.

there's also a sheet just below it listing COVID-19 symptoms just so I could consult it if I felt unwell before leaving the house. But I guess I made it okay?

We have seen case counts grow much more slowly this week and I wonder if campus was driving a lot of the rapid growth....that's not great for the idea of us trying to go back in January, but it's good for us locally. And Grayson County seems to be doing better, which suggests to me that maybe one trip for "big shopping" would be okay during finals week....it would be nice to get back to Kroger, there are some things I like and use that Pruett's doesn't carry. (And maybe? Maybe? If I go early on a weekday and it's not busy, a trip to JoAnn's? I can have little a trip to JoAnn's, as a treat?)

I'm still working on the wombat for my niece. I ordered my sister-in-law's present; it is coming to me because I was able to get free shipping when I ordered a couple things for me, and I can just send it when I send my niece's gifts. (My brother's, I will have shipped directly. And part of my mom's will be directly shipped).

Yes, I still need to give my mom suggestions for me but it's hard to think of things that it would be easy for her to get (catalog shopping) and that I need. Honestly, there's not a lot I need; I might suggest some nice soap from Caswell-Massey and maybe some Aplets and Cotlets, as those are things you use up.

She did say she was keeping up the tradition my dad started of "stocking money" though this year it will come as a check (traditionally he would put cash in our stockings, so we could buy whatever we wanted after Christmas).

I did order myself a little present - well, I've ordered myself a few things, and also my Doki Doki and Gachapon crates are coming, and I am going to save them for Christmas morning so I have some other surprise to open.

There's a company that makes some of the "background ponies" from MLP - they're not officially Hasbro licensed so I know it's a gray area, but since Hasbro seems not to Cease and Desist to the individual pony-makers, maybe it's OK? I don't know. Again, I think attitudes have changed over the years...But anyway, this is Snails 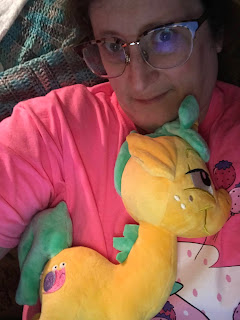 He is one of the schoolkid ponies. He's funny, sort of dumb but dumb in an occasionally-profound way (perhaps not unlike Jason Mendoza from "The Good Place") and his colorscheme is kind of nice.

And his butt symbol* is pretty funny 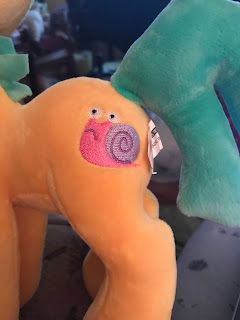 (*The technical term, I guess, is "cutie mark," but that seems not to fit a boy pony. I have used the term "flank insignia" but I think Lauren Faust, who actually helped develop the show, called it a "butt symbol" at some point)

This was one of those nervewracking packages - at first it looked on track for him to arrive Friday, then it was Saturday, then the package shuttled from Tulsa to Oklahoma City and back to Tulsa and I was fearful it got caught in the occasional package maelstroms that seem to have developed - but it worked its way loose and arrived today.

(And I was home....it looks like my across the street neighbor witnessed a porch pirate at my next-door neighbor's house; I was eating lunch when I heard her yell "Put that back! I'll call the police!" and later on the police showed up and they talked for a while out in front of the neighbor's house (I'm pretty sure my next door neighbor is out of town; her job often takes her away from home for a while). Then I saw the police officer walking back with a box in his hands so I don't know if the thieves ditched the whole box or if they took whatever the item was out and dropped the box....but that tells me to try to be home at the time when I have stuff delivered as much as I can possibly be. I'm curious, but not curious enough to text my neighbor about it; I think getting involved is probably not a good idea here. I am still having my porch light set to come on at dusk and off at dawn, and have been turning on the big LED lights on the garage, figuring more light may mean fewer lurkers. Not that I go out at night, which would be the biggest concern (and anyway, the most likely think I'd run into going out at night was one of the neighbor's cats)

But yeah, maybe I needed a break, maybe this fall really was just too much with the pandemic.

Posted by fillyjonk at 9:00 PM