Someone reposted that "Prisencolinensinainciusol" song on Twitter - this is a song an Italian singer made up to sound like, but not actually be, American English, and it is weirdly convincing. The first time I heard it I felt like I was having an aphasic migraine: your brain tells you "you SHOULD understand this" but I cannot.

And someone else commented "yeah but the song still slaps" and he's right.

And then I had a thought, given the weird level of creativity in 1970s pop (perhaps Eurovision starting up was part of it - at least ONE of these songs was a Eurovision song) and I made a thing. And it was a thing that amused me too much for the ephemeral medium of Twitter, so now you have to see it, too: 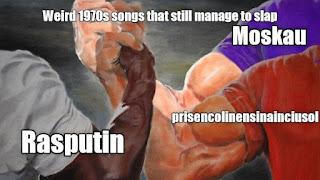 (Caption: "Weird 1970s songs that still manage to slap" - three men shaking hands, one is labeled "Rasputin," another "Moskau" and the third "Prisencolinensinainciusol")

(Added: no, two. Rasputin was one, and Moskau was another. I don't know if the third was a Eurovision entry though)

Posted by fillyjonk at 3:57 PM