I decided to do most of the Christmas decorating today. I still need to get out the Nativity set and put it up, and I have a new string of snowflake fairy lights to put up over the front windows but I did most of the other things. 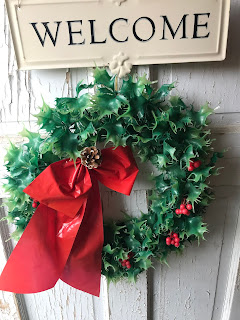 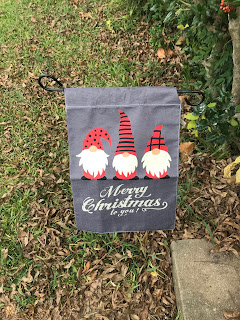 That wreath was an Etsy purchase from last year; it is a smaller version of a plastic wreath my mom would put out on an outside door (and now, on the area between the garage doors). Hers had cracked and I thought she'd gotten rid of it but it turns out she found a glue that worked on it, so she fixed it.

I dunno; I just like it for nostalgic reasons and also it does hold up well to the elements (though I do have a storm door).

I also changed the dolls' clothes: 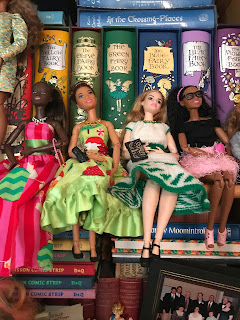 Olivia and Sam are wearing dresses from the Etsy seller Buttercup Dress Up - she makes new Barbie sized dresses off of vintagey patterns. Ginger has a green and white machine knit dress that was in a lot of vintage Barbie (or Barbie-sized) clothes, and Gabby has a pink and black party dress that is Barbie branded, from one of the fashion packs. 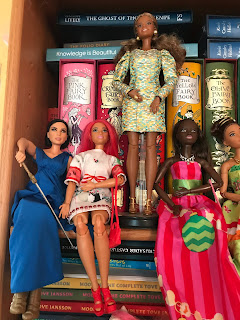 The Wonder Woman and the standing doll (her name is Camille) don't change their clothes as I bought them for the outfits they had on, but Cinnamon is wearing a Buttercup Dress-Up dress, this one was a bit looser cut so it fit "curvy" Cinnamon.

And also I found things for my little group of Creatable World kids: 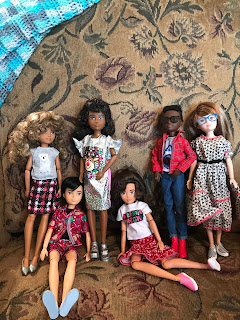 Left to right is Skye (who is Sam's little sister), Alex, Theophanie, Josephine (she is sitting down, she is the newest one I have), Ben (who is Theophanie's cousin) and Mary-Margaret. Ben is wearing a combination from the Creatable World packs, Sky, Alex, Theophanie, and Josephine have Barbie outfits (several holiday themed) on (And you can tell Theophanie's is too big for her). Mary-Margaret is wearing a vintage Barbie dress which is a little long on her but it works.

After finishing my piano practice and doing a workout, I decided to have a go at putting up the tree. At first I was just going to stick the lights on it, but then I decided to do the rest. 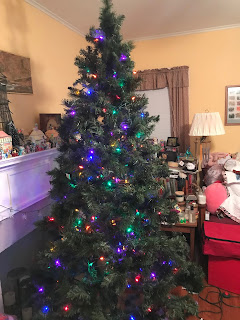 As I was putting it up and putting the lights on, I wondered : could the reason we tell ghost stories at Christmas be related to the fact that as we do the old rituals and traditions, we remember those no longer with us? The ghosts of Christmas? I could almost hear my dad fussing about the lights not being " right" or it being possible to see the cords on them (and our response always was "when the ornaments are on, you won't see them anyway")

And of course this year will be different.

I was thinking of how in the past I would decorate the tree a couple weeks before Thanksgiving - because I'd be in Illinois this week - and also I thought of all the evening things I did in the run-up to Christmas and how some nights I really just wanted to sit home and knit and look at the tree.

Well, I got what I wanted, but I wish it wasn't like this.

But anyway. I put the ornaments on. I can't quite fit all of them at this point but that's okay. (Every year I drop and break one or two anyway. This year it was one of the fairly nondescript balls so it doesn't matter). I have a lot of "figural" ornaments and added a new one this year, bought it when I ordered my cards from Hallmark: 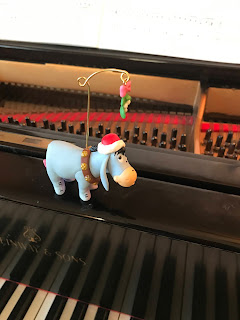 The tree is a big mixture - some cartoon characters, some vintage things bought off Etsy, some felt ornaments with sequins, a few traditional balls....I like it that way, that was how we did it when I was a kid. (I think sometimes, if a person had a fundamentally happy childhood - and I did, at least as far as family things were concerned - you try to recreate that a little as an adult). 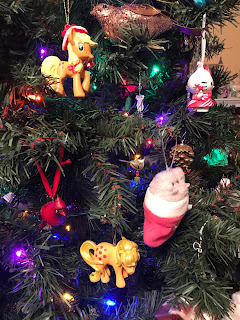 New Applejack and original Applejack! The vintage-style one was the Hallmark My Little Pony ornament for this year. 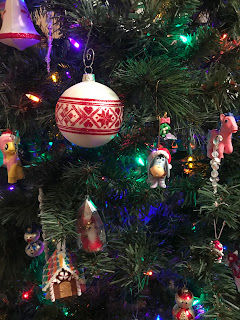 Eeyore, and one of the nice big Scandi-style balls I bought last year. You can also see the "gingerbread Snoopy house" that was a years-ago Hallmark purchase. Some of these ornaments are going on 20 years old now; a few of them are ones I bought back when I lived in the apartment here and had just a tiny little tree. 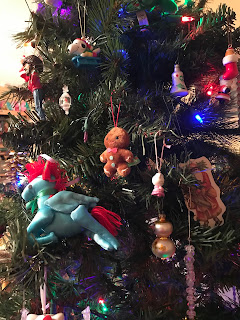 Some more vintagey ones; that blue Pegasus came from one of the antique stores in this area. I'm a little sad I'm not getting to do in-person antiquing this year but I think it's best to wait until after we can be vaccinated to do that kind of thing again, given how tight some of the quarters are in antique shops. 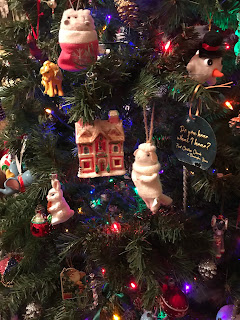 Pusheen, and the pink toy shop I bought last year, and a bunny ornament one of my uncles gave me ages ago, and a sheep, and a little paper ornament I think I got last year at my mother's church and saved.

I might do another short video, though since it's harder now (you can't go through Flickr like you used to, New Blogger seems to have taken that away) I'm not sure how easy it would be to upload.

Tomorrow I might get out the Nativity and the other things (I have a Christmas Paddington that goes on the sofa....) and do the over-the window lights. And maybe put the one or two things I already have as gifts to put under the tree - I have a couple of "unwrap a thing a day" advent calendars (one which was a gift, a yarn advent calendar) and I have an unopened Gachapon crate, and I will save the December Doki Doki and Gachapon crates for Christmas morning....and my mom said she had some things she was going to send, they will go under the tree once they arrive.

Yeah, this year will be different but I guess I try to make the best of it. I still am reserving the right to buy myself some indulgent thing - my mother sent a check to take the place of the "in the stocking money" she and my dad used to do for us.

Posted by fillyjonk at 9:53 PM

My stuffed animals are jealous. I never dress them up. I might put a hat on one. And my large teddy bear wears a T-shirt that no longer fits me. But that's it.