Not much going on with me. Still dealing with pandemic fatigue. I coined the term - though it's possible others have thought of it - Pandemic Middle Syndrome (PMS), to describe that feeling of anger, hopelessness, wanting to eat all the carbohydrates, etc., that comes when you're stuck in the middle (I HOPE it's the middle, already) of what feels like an untenable eternity. I am trying to keep safe and am not doing anything foolish, but yes i am tired and yes I would really like to just go out and DO stuff.

But also: one of my students (luckily in the online only section, at least luckily for me) has actually come down with COVID and I have, I think, five others quarantining following possible exposure. (One of whom was in class Monday, and I got the note on Tuesday about him having to quarantine and not just for his sake I really hope he doesn't actually take sick)

I did a bit more sewing-down of the binding last night but it takes forever.

It's very cold in my office - like 60F, which maybe isn't cold for some of you, but when you are dressed in "indoor clothing" (you never know here which rooms are cold and which are overheated) and not doing active work (60F would be comfortable for splitting wood with an axe or hiking briskly or hoeing up a garden), it is unpleasant after a while. I got cold yesterday and it took me a long time to warm back up after I got home, and that was even with going home at 12:30 after my last class of the day. (I told students I'd be here to answer questions until 3, and I do want to get some labwork done).

My hands are raw, I think it's the combination of it being cold now and also all the handwashing. I ordered some special "healing hand lotion" which I think has urea in it (a long time ago that was suggested for bad skin) but it's not here yet and at this point I've decided to cut out nonessential trips again (I will be going to the small local grocery, probably tomorrow afternoon) because case counts are up again. (And I hate this all so much. I'm telling myself this is the expected second wave but I think I feel WORSE dread of this remembering what this spring was like, because back then I didn't KNOW, I thought "maybe if we are 'good' and stay home for a few weeks this will pass by and we can go back to life much as before" but now I am sadder and wiser and....yeah. I am not entirely sure I will make it through a winter of not even going out to the JoAnn's once in a while, and maybe having to juggle food shortages again, or unpredictable availabilities. Yes, I still have ten pounds of flour and a bunch of cans of beans and my 12-pack of Golden Syrup came from Shop Gourmet, and I have canned milk, but....playing survival games for real isn't fun.

Maybe what I need to do is take comfort where I can. For example: the natural gas is flowing just fine, so maybe on cold days I just turn the furnace at home up to a nice temperature instead of keeping it down around 68 to save money. And more warm baths - heck, I might take one after I get home today and just put pajamas on. And maybe I use my isolation time during the upcoming breaks (nowhere to go, no one to hang out with) to just work on quilt tops; I am mostly pretty happy while sewing on quilt tops. I might even figure a way of rigging the charger for my cell phone so I can listen to BBC 4 on the app for like 10 hours straight without worrying about power. (I don't have a lot of outlets in that room and the main accessible one is taken up with my sewing machine and the lamp)

And I did break down, even though I've been saying I'm "broke" (not REALLY, but it's been an expensive fall, between a $500 garage door opener, and $1200 tree removal, and now a $180 plumbing fix last week) and order some books from Folio Society and those are slowly on the way to me (one of Campion short stories; I love Albert Campion, my favorite fictional detective these days).

And yes, getting into bed and reading brings comfort; I'm still working away on "In a Dark Wood Wandering" (and there's a passage in there - the origin of the title, in fact - that I should quote because it seems symbolic of what so many of us are dealing with now). And I should restart SPQR, though I also got interested by a biography of Samuel Johnson* and he seems even more of an interesting person than I thought (and yes, he did have poor vision, that 'peering Johnson' drawing is not inaccurate)

So maybe I also read more these cold winter days. It's an escape, at least, and maybe I learn something.

But still: I wish humans could hibernate and that I could just eat a crapton of food and then sleep until this is all over.

Update: one good thing, the watch to replace the Eeyore watch that died came: 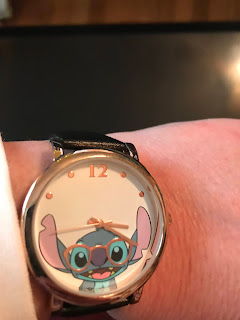 Stitch! With glasses even! Yes, it's not easy to read the exact time but I don't always need that. And I just like it. (I wear a watch mostly as a comfort object).

I joked on Twitter that Eeyore and Stitch were probably the two Disney creatures I related most to - not to any of the princesses, not to the "traditional" heroines like Minnie Mouse but to a depressed donkey and what is fundamentally an intergalactic opossum.