Maybe I'm getting over the pandemic slump? A little? Over the weekend I managed to make the binding for both the quilts I had that were done (the first one had been sitting in my sewing room since I made a furtive trip in April to pick it up from the store (at a time when they were asking us not to do any shopping other than essential)

The second one I picked up a week ago from Lulu and Hazel's. 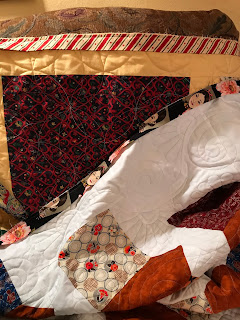 I started the long process of handsewing the binding down on the Asian-inspired one last night, but it will be a while.

I also just barely started cutting the background/sashing fabric for the next quilt, which will be pastels of one of those charm packs (5" squares from a single fabric line). I seem to remember the line was named for a house in one of Austen's novels (but I could be wrong); mostly florals with cream and grey. I am using a coordinating pink as the main fabric.

I also finished reading Skunk and Badger. It was cute and nice and while I'm not quite sure I "get" the whole chicken thing (if there is a thing to get, I can't tell if this is like "The Mouse and His Child" where there's deep philosophical stuff or if it's just kind of a little bit slapstick/a little bit Hammerspace). Apparently this is the first book of  an at-least 2 book series, so I will have to look for the next one. The author is Amy Timberlake; it's a fairly recent book. I'd say it's probably aimed at tweens or maybe slightly younger to be read to...)

Another thing I did? I piled more of my big stuffed animals into my bed and I wound up sleeping kind of like this cat the other night: 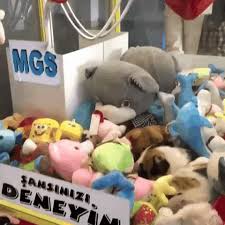 In a weird way, it made me feel better. I don't know if it's the sense that "I am now part of a pack, I am not alone, I am in some way safer" even though I know of course the stuffed animals would be no protection in the real sorts of danger I might face (granted, relatively few where and how I live). Or maybe it's just that it finally got cold outside and I don't wake up too warm in the middle of the night like I do in summer...

I dunno. I am torn between "small life is good life" where I focus on things like cooking and sewing and watching cartoons* and then sometimes I get caught up in the worry of "what is going to happen to us" with everything, with the virus, with all the anger. And I admit a lot of it is "stuff I don't control" and the small-life things are things that I do. I don't know.

The truth is, there's always  been bad in the world - meanness, and disease, and violence, and other terrible things, but - like, I think about my maternal grandmother, in 1918 she would have been newly married and still probably walking up to her parents' farm to see them from time to time, and probably weekly trips to the market was the big thing of the week....I was wondering the other day if people during the 1918 flu felt the same desperation and sadness and trappedness that I feel some days, and I realize: most people back then didn't have the mobility I formerly had, nor the disposable income, and so sticking close to home and doing the daily round would have been more....and maybe would have been enough....and I am too spoiled and too used to running around to quilt shops and the bookstore and fancier food store than the ones in town, and maybe I just need to accept that the thing with weekly quick store trips and making do with what you can get locally is the way almost everyone lives and just not complain about "I wish I felt more comfortable going out to the JoAnn's" and the like (as case counts here rise)

I'm also try to more actively make peace with the fact that I will be here, alone, over both Thanksgiving and Christmas, and there will be long stretches of time when I have nothing I am doing and probably I need to make myself watch some of my dvds (of late, it seems the GOOD tv has been migrated to a streaming service and.....well, they're reinventing cable and in a few years you'll be paying what you did for cable for streaming....and then they'll come up with something new) and just work on quilts or sweaters or something. (I do admit a bit of worry about "what happens if things get even worse and they're discouraging us even leaving the house for other than for groceries" because that was bad this spring and summer, especially once classes ended and I felt I had no purpose any more)

(I just worry about how dire this winter could be, already warnings are being issued. And knowing how much I struggled this summer - and the fact that literally May-June-July are pretty much a giant blank in my mind, like I DO NOT REMEMBER THEM HAPPENING, I am worried about this winter, worried about my mind.)

(*Confession: one of the small silly things about Cartoon Network I like is that every night, when they end their "kid oriented" programming for the day (currently at 8 pm local time) they say "That's it for us today. Thanks for hanging with us and watching cartoons!" and in a weird way that seems so friendly and welcoming to me - I have probably been alone for too long. But yes, the idea of just being able to hang with someone and watch cartoons, or old movies, or drink tea and talk, or roam around stores, that's something I miss and mostly something that won't come again for a long time. I mean, I get that Cartoon Network's thing is 100% a marketing thing but darn it, it still sounds friendly to me and I like it)

Posted by fillyjonk at 9:25 PM