* I did get out to JoAnn's (and Ulta, briefly) and Kroger's again this weekend. Moved fast, wore a mask, tried to stay as far from people as possible. Kroger's was a little better (fewer unmasked people) but JoAnn's was worse from the standpoint that they had two (2) employees in the entire store, and they were apparently in the back - I was getting some fabric cut and I had to wait nearly 10 minutes.

And yeah, I wanted it because some of you might remember that star quilt using "treat" themed fabric I was working on like ten years ago? I saw the blocks for it again and thought it might be nice to finish it, finally - and I wanted a few new fabric.

I also got more sewing-machine needles and also some handsewing needles. Because, you never know. Some are talking about a really bad second wave and maybe we have to stay home again for a long time? And this time, if I'm not so freaked out and I'm able to sew stuff, I'd hate to be without the necessities for it.

Also, you heard it here first: those "cakes" of color-shifting yarn are apparently over and have been replaced by big blobby chenilles (sigh, chenille does not knit up all that well - it "worms," which is ironic given that "chenille" is French for "caterpillar). So I snagged a couple of the cakes to eventually make just a simple openwork rectangle shawl (maybe something like Turkish stitch): 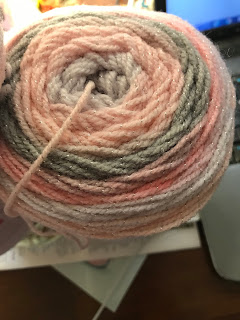 It'll be a "just knit until it's big enough/you run out" kind of project.

At Kroger, I managed to stock up (including getting the only brand of chicken broth I can eat because it has no celery in it - Pacific Foods - so now I can easily make soup this fall). Biggest food bill I've ever had but I was also buying another 12 pack of tp (like I said: I am just preparing in case it gets bad, though maybe this will be like the umbrella principle - where if you bring your umbrella with you to work, it doesn't rain that day. You can all thank me if my stocking up magically triggered that there is no bad second wave....)

* I finished sewing up the blocks for the castles and unicorns quilt but didn't get them set together, though that will be fairly fast, because they are all identical and don't need to be laid out - I can just grab and sew them in my planned zig-zag orientation. I might just take this one to Lulu and Hazel's to have them quilt it, on the grounds that (again) it might get harder to get into Texas at some point. Also supports a small local business, though I think they're doing okay - and they have another quilt of mine in progress.

I might work a bit more on the "treats" quilt then, or maybe I pull out one of my sets of pre-cuts and make a top with those. I certainly don't lack for fabric, it's more time and motivation I need.

* I often listen to BBC on my phone while I sew - doesn't always require a lot of concentration, but it is human voices. (I vastly prefer BBC4, which is apparently the "arts and intellectual things" channel). They also do a Sunday morning service. As far as I know, they have all been Christian of some sort - some "high church" (CoE), some Methodist, some non-denominational. This weeks' was from a woman who heads up a church in Manchester, though apparently she grew up in a rural area, and it was for Harvest Sunday or whatever they call it. (Yes, it is getting to be that time - Canadian Thanksgiving is only a few days away). In the course of it, she talked about COVID and the food banks and how the people who ran the food banks there were absolutely blown away by the response that people (the ones who had a little money to spare, not the clients) made - their shelves were kept filled, people made very generous donations.

And she used the phrase "practical love."

That is a wonderful phrase. I've heard a number of ministers down through the years talk about how "love is a verb" and yes, that's true, too. But the idea of practical love - it makes SENSE to me. You see a need, you go and help with that need. Because that's what you do. That's really, for me, where I feel most connected - when I can do something like that that directly helps. (And I think that's part of my frustration during the prolonged time-at-home - a lot of the things I would have ordinarily done, I could not. I did get out in July to deliver Meals on Wheels, but that was just one thing).

(I've also heard of degrees in "practical theology" and while I don't exactly know what that is, I also like the idea of it - the idea of taking your faith and using it in the world to try to make things better)

And I was also thinking about how a lot of my frustration through all of this, all - all the injustice and the horrible things going on with the virus, and hearing of still more local politicians on the take, and everything, and my feeling that (a) I had no control over any of it, I was just one person being swept along in a tide of badness and (b) I had no power to change anything.

Though this weekend - I had a couple students with problems. The one I remember best, a student who had to run out of town for a family emergency, they e-mailed me and said "I thought my cell phone hot spot would be good enough to take the exam from but it really isn't, is there any way you could hold the exam open for me on Sunday so I could do it when I get home" and you know, it's such an easy thing for me to fix, and so I did. And I realized: I might not be able to do a lot but I can at least be kind to the few people I interact with. And maybe that's enough. I pray that that's enough.

(And yes, maybe there are people who take advantage. I am quite sure this student did not. But maybe it's not my place right now to try to forensically determine whose excuses are legit and who's telling me a story?)

But yeah. When your only power in this world is to be kind, then be kind, I guess.

Posted by fillyjonk at 6:41 PM