That's today, because we get Good Friday off (which I realize is highly unusual for a state school).

This is a good thing, because tonight is Maundy Thursday service, and our interim minister is trying something that seems quite ambitious to me. He has a "Passover service for Christians" (an adaptation of the traditional Passover seder) and is going to have us do it....yes, with the lamb bone and the roasted egg and everything. I'm a reader ("Woman Leader/Mother" - I presume it's designed to be done within a family in some cases, hence that designation). Luckily I don't have to memorize my part; there's quite a bit to it. The entire order-of-service is something like 12 pages long. (I'd joke we were doing "the whole Megillah" but I think that's actually the term used for the scriptures used at Purim - this would be the "whole Haggadah")

(I realize some Jewish people might be uncomfortable with Christians "aping" the Seder; I hope no one thinks it's disrespectful for us to be doing it. We are doing it out of a desire to understand the culture that our faith grew from - after all, Christianity really started as a subgroup of Judaism....)

So, I anticipate tonight running late. Good thing I can sleep in tomorrow if I need to. (One of the people I follow on Twitter remarked that her family Passover seder Tuesday night ran to 11 pm.)

One last on-break project; this one is still in progress. (I am farther on them now; I have turned the heel and almost finished the gusset decreases): 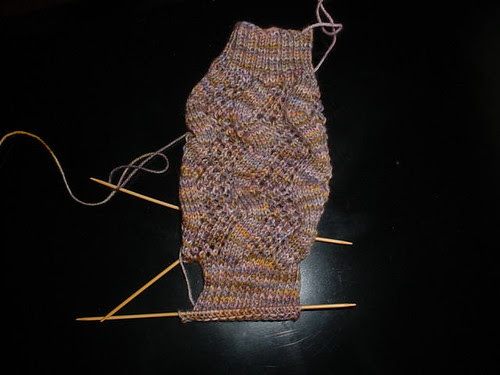 It's another pair of Rib Fantastic socks from the "Knitting Socks with Handpainted Yarn" book (previous pair - I call them Pele's Socks - is here.)

This time, I'm using a much more muted yarn. (In the lingo of Sulcoski's book, it would be a "muted multi" as opposed to the "wild multi" I used for the Pele's socks). This is a Pagewood Farms yarn, from the quilt/yarn shop in my town. The colorway is called "River Rock" which I think is a very apt and nice name for it - it does make me think of the water-polished slates and even agates you can sometimes find in flowing water.

I've mentioned before that sometimes the color NAME, as much as the actual combination of colors, makes me want to buy a certain yarn. This wasn't really one of those - I saw the yarn and went, "ooooo, pretty!" before I looked at the label, but having a nice evocative name doesn't hurt.

I got the next-to-last row for the Mixtape quilt put together and on the quilt. I might finish that this weekend. I also cut a few more bits for the "Om nom nom" quilt but I will have to plan carefully that I don't "overcut" and have far more blocks (or block-parts) than what I need.

I'm also contemplating the "next quilt" - the Om Nom Nom quilt is kind of an ongoing thing where I make a few blocks here and there, rather than doing the whole top at once. (It's one that's easy to pick up and put down). I have the nifty aqua and red fabrics laid out and I really want to start cutting for that one (The pattern I am using is called "Taking Turns").

It's funny how I shift back and forth from mainly-doing-knitting to mainly-doing-quilt-stuff. I suppose part of it is that I get a little burned out on some things and have to shift back and forth. (I can't always do that at work, so it's nice to be able to do it in hobbies). Right now I'm really in love with making quilt tops so that's what I'm mainly working on. (The fact that I can get them quilted locally, if I want them machine quilted, helps - so I don't have fifty unquilted tops stacking up. I like handquilting but it's very slow, much slower than piecing is, and to be honest? Most of the time I like piecing more.)

I'm also thinking about getting back to hand-piecing. I have a bunch of Grandmother's Flower Garden blocks done, one partly done, and a bunch more pieces cut. (If I do buy that bolt of white Kona, I could also start cutting the "paths" and assembling the quilt. Though the way my time goes, I may have to hope that my niece becomes a quilter, or that I make a young friend that I could some day leave the top to to finish). But then I also saw this post on Aneela Hoey's blog and find myself wanting to do a one-patch hexagon quilt. Maybe even buy the pre-done papers for it (you can do such a thing. I can't for my grandmother's flower garden because the patches I am using are not one of the sizes sold, but you can buy pre-done paper patches; I think some of them are even reusable once you pop them out). I have lots of bits and scraps, mainly of 30s-style fabrics, that would work well with that. Or I could use "bright pastels" like the Denyse Schmidt fabrics; I have a lot of those. The nice thing about a one-patch hexagon quilt is that it can kind of grow organically; you make a bunch of patches and then just start putting them together. You don't have to do them all first and then lay them out to see what looks good; you can choose what to add as the quilt grows based on what would look good where.

I don't know. A lot of this is "fantasy," that is, it's me dreaming about things I would LIKE to have the time to do but really don't. I come up with dozens of projects I never actually start. (And also I've had research ideas I never actually started, usually because of time constraints or because I really need to finish one project and get it towards publication before I start another.

Posted by fillyjonk at 8:11 AM

433 Hagahdot (plural of hagadah)vary greatly in length; the one Ken and I prefer is about 70 pages! We have a lovely one that's over 150. Many people do cut out parts of the seder, in the interests of time or to keep children interested. Enjoy! It's a very lovely and universal holiday.

The River Rocks colorway is stunningly gorgeous, and the pattern is perfect for the yarn.

Have a wonderful day off!