This was the first "nonessential" shopping I have done - well, really since February. I did make a couple quick runs to the local quilt shop (they are now closed on Saturdays and Sundays so weekend trips there won't happen for a while, not until their hours change). But for big shopping in a big store, no.

I will admit I was apprehensive. I got off later than intended, and also, I got fooled into thinking the exit I would take was closed (they are ripping up all the streets in town - going home on Friday was difficult because they were tearing up Wilson street, finally a flagman gestured the direction in which I was to go)

Anyway, I wound up taking the long way there, it was after 9:30 when I arrived, but fortunately they weren't busy. There were maybe 10 people in there (and it was an enormous store - an old Circuit City that got converted) and everyone was properly masked. So it actually wound up feeling....kind of normal? At least, I was able to kind of forget a pandemic was raging as I stood and looked at the yarn. (I will note, though - both the yarn and quilting fabric sections looked slightly depleted. I know a lot of quilting fabric is printed in South Korea and maybe the slowdown in getting stuff here from elsewhere is part of that? Plus the higher demand earlier for fabric for masks? Or maybe I'm wrong about both and it's just almost time for their fall "reset" and they don't have things restocked yet)

But I did get the yarn for the gift project (sort of a taupe color - my ray is dark grey, this one will be taupe). 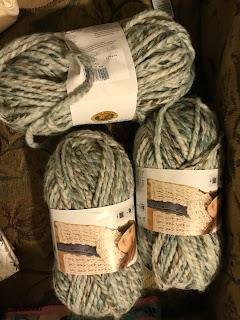 My usual, "Fall is coming, I want to make a scarf." This time, it is a super chunk (CYC 6) yarn in a color called "sea glass." They claim on the ball band three balls is enough for a scarf even though that's only 240 or so yards. Not sure what pattern to use or if I just do something like a mistake-stitch rib or some other plain rib pattern.
I also bought some fabric. I had had the presence of mind to look up how much was needed for the current quilt top I am working on and I found this: 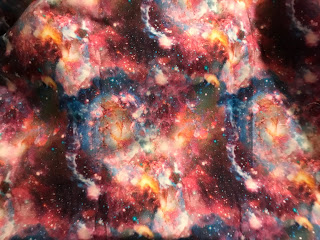 The colors coordinate (it is sort of a galactic/space print) and it's a very nice, fine fabric with a nice hand - so I like it for the backing.
I also did indulge in a few Hallowe'en decorations. I never did much for Hallowe'en before, but this year....maybe. Or at least, in my own way.
I do not care for gory or scary stuff, and the memento mori stuff like skeletons, especially this year when there's been so much loss in my recent past, really turns me off. But funny/cute/vintagey stuff, yeah, that's good.
I got a new doormat, I will probably wait another week or two before I put it out though: 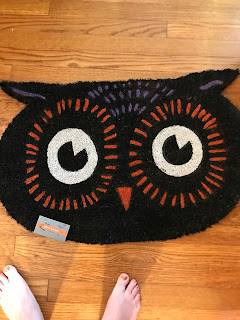 It's both cute and has a vintage feel, but it's still Hallowe'en.

And I got a fall-not-necessarily-Hallowe'en wreath type thing for my door: 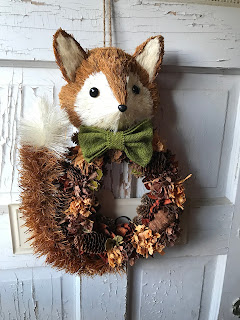 I just thought it was cute, and cute is good.

I bought a couple of things that amused me. I said I didn't care for the whole gross/skeleton/morbid thing, but spiders and bats I am okay with. 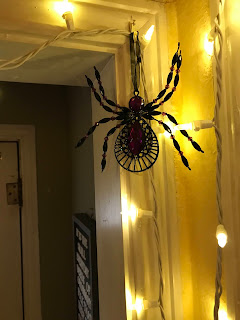 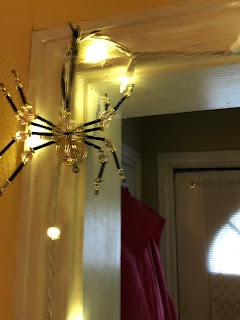 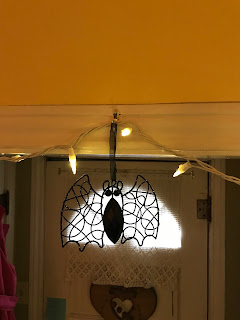 It's hard to see but they have glitter, and glitter makes everything better.

I also want to hunt around and see if my "spider light" strand (LEDs) still works, and if it does, maybe drape it over the framed picture I have on that wall and attach it in with the fairy lights on the timer so they will come on automatically at the end of the day.

I also got a tote bag that says "totes" on it in a fancy script (playing on the slang usage of "totes," as in "totes magotes")

It amused me, and I always need more canvas bags for projects (and the cashier was able to pack most of my purchases into it, saving her a bag and saving me from having to dispose of a bag).

I also got the first copy of Simply Knitting (the UK magazine I used to buy) in six months. It's the.....Easter.....issue. I guess they're slow in getting here, too.

And some more Gutermann thread, realizing that if I have to lock down AGAIN this winter (I am expecting a wicked second-or-maybe-the-first-never-ended wave), running out of thread would be a bad thing. I do want to make more quilt tops.

And some more picture frames; I am not sure where I will put this up yet but at least I am glad the pictures are protected 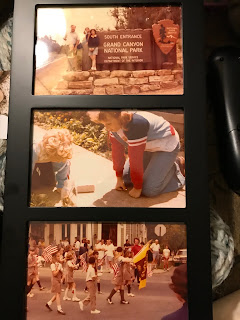 Those are all from 1976, when I was 7 or 8. The middle photo is my brother and me looking at one of the monarch butterflies we had raised from a caterpillar; we were releasing it in that photo.

So it was nice - being there felt almost normal. Maybe I can go again some time if I go very early in the day and move quickly.

Kroger's, not so much - it was crowded (holiday weekend, I guess) and there were a lot of pushy unmasked people and at one point I got trapped in an aisle with large groups at either end and I could practically feel them BREATHING on me and I admit I panicked a little (We are all Adrian Monk now, I guess, at least those of us trying to take things seriously). I persisted though and the only thing I wasn't able to get was the Golden Syrup (they were out). I have a couple bottles left and I COULD switch to honey to sweeten my tea if I have to. Or I could try mail ordering, though often mail order places charge more.

But yeah - if I go to Kroger's again any time soon, I'm going to see if I can inveigle a time in the afternoon of a weekday (not a Friday though) so they'll be less crowded.

The cashier I got was good and pretty fast, though. When she asked me how I was I said I was okay but everything kind of felt like playing a video game on hard mode and she laughed and said "Yeah, that's about right."

And now I have food for a while yet.

Driving around Sherman, though - there's a fairly new Nepalese/Tibetan restaurant and I really hope they make it to the after-times (if after-times there will be) when I feel safe going in to a restaurant to sit and eat, because I want to try them.

Driving back home? Well, our two growth industries in my region of Oklahoma are medical marijuana and the casino - neither of which are things I partake of. Which is why I have to drive for things I want, which is more complicated right now.

Posted by fillyjonk at 7:45 PM