First up - I finished the manta ray (from a Yarnigans pattern) on Saturday. I still have not named them or decided on a gender: 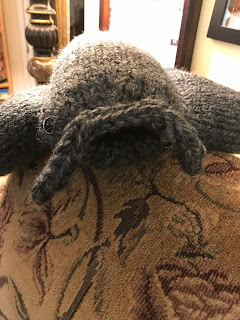 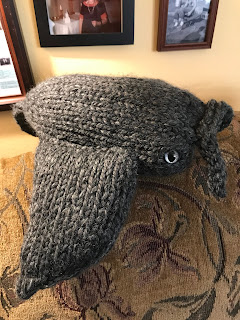 I'm leaning towards calling him (not very creatively) "Ray" unless I can come up with something more clever. He is nice and big and cuddly though.

I started the gifty one on Sunday and got the body about half-knit; if I have energy this evening I might do a bit more; I want to get this done and mailed off before it's TOO long after the actual birthday

"Guess I must be 'management' 'cos I actually worked today"

I had to do stuff for work, though. First up - reviewing the Clean Air Act and writing out a "script" (I am getting more comfortable with the teaching masked/using Zoom but it still helps to have these) of the important points. Then I ran over to school and got all my beads (more about that later) and did a workout.

Then I sat down and reviewed the first part of probability for Biostats and write out the "script" for that. I'll probably need to do another one for Friday's class because I may only have enough for Wednesday. But probability is the thing I am shakiest on (I never had an actual class on it, and I don't like how Zar presents it).

Once I got that done, on to the beads. 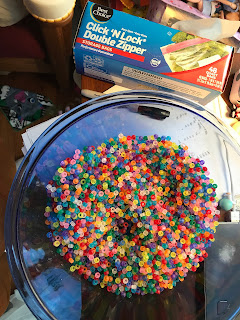 Not as much fun as an actual mini pony.

Stimmy, though. I would like a big bowl of these (though maybe smoother and cooler to the touch, like polished stones or smooth glass beads) to run my hands through. 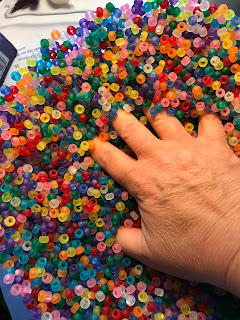 I thought I'd be able to weigh out the biggest aliquots but for fewer than about 60 beads, they're too light and my kitchen scale too insensitive, and I didn't feel like running over to try to see if one of the lab balances would work any better. So it was a lot of counting. A LOT.  I had fifteen of the logistic populations, each with six different "time points" so that's.....what....90 bags. And then five each of three different patterns of population growth, with five time points, so that's another 75. It was a lot.

And what kills me in this? No one is going to see this work other than me. No one who's been dissing universities in all this is going to give a crap that I gave up the afternoon of literally my one federal holiday for months and months to prep this, all they will see is that it wasn't like in the before-times, with labs with "real" creatures and students collaborating. And it just....it makes me sad. I hope I get to keep my job after this - they're talking that maybe 1/4 of the universities in the nation will just shut down. I'm too old to want to go on the academic job market again so I'd have to withstand a few years of no real income while I trained for something new, I don't know what. (Home health is not an option though I'd have the aptitude for the medical stuff - I neither have the stomach for dealing with blood/pus/vomit/waste nor do I have the tolerance to deal with angry/sad/scared people on a regular basis)

But that's the future. Today was counting beads.

Here's the bowl after I was done, so you can get an idea of the full horror: 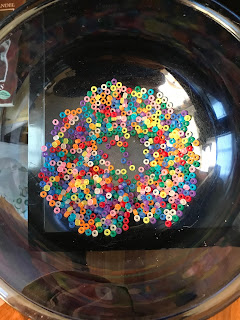 At least I didn't underestimate what I needed, or overestimate too badly. (I did buy a couple more cheap bags of pony beads just in case on Saturday, on the grounds that it was better to invest the seven bucks than to have to actually GO INTO the wal-mart if I ran short - and JoAnn's may have been cheaper, anyway. I can just hang on to them; they might be needed for some other simulation lab, or, failing that, I can donate them to the local mother's day out program for crafts.)

And here's the end result - thirty bags that are the whole populations, each with either five or six smaller bags representing the populations at different points in time. 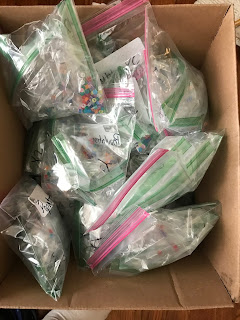 This is in case it rains Wednesday, though if it doesn't rain, I can do the bug lab and do this one next week, and have it all prepped.

But yeah, sad that I lost one of my three-day weekend days. (and half of Saturday, after I got home, was writing an exam in BlackBoard.....and I have another one, for a different class, to start working on this week.... it never ends)

Posted by fillyjonk at 6:41 PM