But I'm gonna tell you a little bit of what fieldwork is like. At least for me.

A lot of my research, I do alone: a lot of it is smaller projects and because, discipline-wise, "there ain't nothing like me, but me" in my department, collaboration often doesn't happen.

So in addition to the logistical challenges that are inherent to fieldwork (making sure you have all the equipment needed, site-permissions, dealing with weather, etc.), there's the added worry of: I'm going out somewhere alone where it's not impossible I could step in a hole and break an ankle, or get bit by a venomous snake, or just get overwhelmed by summer heat, and I would have no one who had my back in the field. (And also, yeah: I worry a little bit about wild boars and I worry more about messed-up people because the field site I am using is also a gateway to fishing areas on the lake, and I remember that one time I heard an ODWC guy lecturing some of our students who were going to be volunteering with game wardens, and he commented that "10% of the people you will meet up with will either be high on meth, or coming off a high, and if someone starts to give you trouble, the data aren't worth your life" and that kinda scares me because I'm old and heavyset and I can't run for my life like I could when I was 20, and I don't carry "protection" in the field* like some people I know)

Cell phones have made it easier. I carry mine, and keep it turned on, just in case. If worse came to worse I could dial 911 and give my general location.

(*Maybe I should, I don't know, but I have literally never shot a gun in my life and I worry about the learning curve of getting good enough to seem sufficiently threatening if I am threatened. I would honestly rather be able to run really fast again, but I doubt that will ever happen)

I also let people know where and when I'm going - I told the secretary this morning that if I wasn't back at the building by noon, to send someone out to the site looking for me. (She has a son who is a sheriff's deputy in this county, so very likely it would be him).

Anyway. So in addition to "this is going to be hard work" and "I kind of don't really know what I'm doing," there's the added worry of "I'm out there all alone and how do I get help if I get hurt/overwhelmed from the heat or exertion?"

And yeah, this is one of those cases where I wish I had a Significant Other or at least good friend close to me in age or fitness level and who had some free time to be able to go and do stuff like that, because they wouldn't even need to really understand all of what I was doing, they'd just need to be there to talk to me and maybe carry some of the stuff, and make sure I was OK.

But I don't have that, and in the summer few of my colleagues are even around (there are one or two I *might* be able to rope in to helping me, but...they're not around). So I go alone and just hope for the best.

(Like I said: I did tell my secretary where I was. And one of my other colleagues, the physiologist who has an MD was like "are you really sure you want to do that?" and I was like "I don't exactly have a choice' Lab scientists don't understand some times. (He was suggesting I go out late in the day the day before but meh - it was probably hotter than and if I had gone I'd have got terribly stormed on)

So anyway, bright and early I made sure I had my stuff: ziplock bags (the REAL kind. This is not a place to economize with a cheap brand, because having a bag break open out in the field is a bad thing). A couple of Sharpies for labeling the bags. My bulb-planter, which I use to sample. Surveyor's flags to mark where I sample (I do not expect those to still be there next month; deer pull them out and sometimes humans out there see them and pull them out, but I have landmarks I can use to relocate the sites). My big "snake stick" (a large piece of seasoned driftwood the size of a hiking staff, which I use both to make sure any snakes in the area feel me coming and get out, but also to knock down spider webs and just feel my way in tall vegetation so I'm less likely to step in a hole), A backpack to carry stuff in. And water, though I suspect I didn't drink enough today because I just wanted to get DONE.

What I was doing today was setting up two transects - I used a big pine tree, the only one in the area, as kind of the "this is where they start" (there is also a "memorial" - two blue crosses - out on the highway opposite it, and I can see them from the field site). One transect is down in the lower area that was flooded; the other is up on the hill (where the tree is) that wasn't. I took seven samples along each, spaced about 10 meters apart.

I took the flooded-area samples (F1 through F7) first; I figured those would be easier because the vegetation had been flattened and the walking was easier, and I could work out some of the kinks of sampling.

I admit, starting a research project, even using techniques I've used before (I am using effectively the same technique as the long soil-invertebrate study I published in 2015), I feel like this 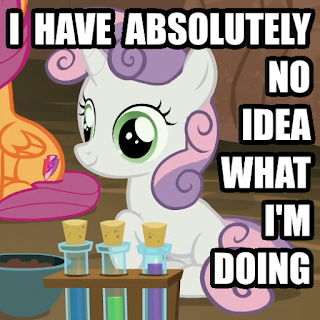 But you do it anyway. (I have had other people who do research tell me they feel the same way, so I guess I'm not totally alone).

Anyway. Get out the bag, label the bag, locate the sample point, place a flag, collect five soil cores in a particular pattern around the point, put them in the bag. Seal up the bag (make sure it's sealed!), put it in the backpack, move to the next site...

At first I admit I am like "uuuuuuuggggggghhh so many of these to do" but eventually I got to the point of "okay, I'm 1/4 done" and then "okay, I'm almost half done" and then I had to hike up onto the hill (I worked backward at that point, starting with sample 7, rather than backtracking).

I learned one big thing doing this: I need to get a strap (I think they still make those? "Croakies" or some such?) to hold my sunglasses on. They are a little big for my head and while that's not normally a problem, when I'm bending over and my face is perspiring and the glasses fall off and I LITERALLY only have enough energy to attend to the sampling itself and NOT deal with other annoyances...yeah.

(When I run out to get some lunch - I think I have EARNED a lunch from out today - I might stop by one of the chain drugstores to see if they have them. While i am thinking of it...)

Anyway. It got harder and harder as I worked. (The dewpoint here was around 75 F, and the "feels like" by mid morning was 95. If it were *just* 95 straight degrees out with low humidity, I'd be able to tolerate it, but that high dewpoint is a killer). Eventually I just had to drop to a knee (rather than bending over) as I sampled, and I was glad I had the hiking staff to help me straighten back up.

Also, 14 samples worth of soil in a backpack? Weighs at least 40 pounds, maybe more....I get a fair amount of soil for each of these.

Finally I got done, but that meant a walk back to my car, about half of it through tall vegetation. (Tall = between waist and shoulder height on me, and I am 5' 7")

As I started back, I could feel my chest start to burn. Not good. This is evidence that I'm struggling to get air in (humidity is a big asthma trigger for me). I slowed down a bit and told myself that it would get better once I got to the trail, which was both more open and was shaded. But yeah, I could tell I was struggling. (In retrospect, a big part of it was probably carrying that loaded backpack)

Anyway, when I got to the trail, I was still a long way from my car. I wanted to sit down but I was afraid I wouldn't get back up if I did, and I'd wind up having to call for help (and then wait in the heat for it). So I told myself: Just walk 10 more steps. And then: Just ten more. And then: ten more and you'll be in shade and it will be cooler. (It wasn't, much). And I kept telling myself "just ten more steps" and counting them off until I got to my car. (By that point my fingers were getting numb; I think the backpack straps were pinching a nerve)

But I was able to get in the car. I didn't change out of my field boots even though I normally don't like driving in them (it's harder to feel the pedals well) because I just didn't feel like bending over again at that point. Got the air conditioning running which I needed. And then pulled out on to the roadway.

I didn't realize I'd got the car in low gear (I can't always feel that and I didn't look) but when I tried to accelerate to 65 it complained badly and the tachometer spiked up and I momentarily panicked - was my car going bad? Was I going to be stranded in the heat? Luckily the road was largely empty so I hit the brakes and was able to upshift quickly and then things were OK but yeah.

I dropped the soil off at the building (and checked in with the secretary) and then came back here and showered. I still have to go back to set up the first run of extractions with the soil, but at least the worst part of it is done. (Though I'm not sure how I'll manage the August sampling I plan; I'll have to hope there's a really cool day in August when I can get out and get the soil)