The day I left for Illinois I was feeling A LOT better, but felt like I still needed to eat carefully. And my default "eat carefully" food is low or no fat yogurt. But I didn't have any in the house (I tried to work down the food I had and not buy more). So after mowing and showering (and dropping the graduation card in a blue mailbox), I ran to Green Spray, because they're close.

Green Spray is TINY and it's fine, if you're willing to roll with a smaller stock and brands other than what you might prefer. I used them a lot during the pandemic because they were close, and they were more careful about controlling numbers of people in the store. I've since switched more to Pruett's because they carry more things I prefer, but I still sometimes use Green Spray because they are only about four blocks away.

Well, this was the only brand of yogurt they carry: 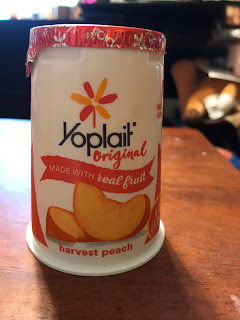 And wow, that takes me back. I haven't bought Yoplait in years. I remember it was one of the first widely-available brands. Yes, I am old enough to remember the 1970s, where yogurt was seen as slightly exotic, health-foody, and "European" in the Midwest, and Yoplait - which we thought of as a French brand, and I guess it originally was - was one of the common brands. And the packaging looked very similar to how it does now.

I can't remember when I first tried yogurt or if I liked it when I did. (I think I probably would have). I started eating it a lot in grad school because it was cheap enough and was convenient to pack in a lunch. I know one of my labmates dismissed it as "expensive milk" but it is easily-portable milk, that survives part of a day at room temperature* and which contains some added benefits

(*It's hypothesized that yogurt is one of the first ever "processed" foods - like, several thousand years ago - because it both is a "controlled spoilage" (growing organisms that won't make you sick, so they hopefully crowd out the ones that could) and ALSO it digests away some of the lactose - important when the default human adult condition is to not be able to tolerate lactose well)

I eat yogurt a lot now. Like I said: it's convenient. Yes, the plain kind IS better for you but I tend to be careful otherwise, so the occasional sweetened one probably isn't so bad.

I know people who make yogurt at home. I've never tried; it seems a level of biochemistry more than I'd want to undertake most of the time.

I LOVE Yoplait. Never took to the Greek stuff.