I got what I needed to get done for tomorrow this morning. Originally I had volunteered to help price and sort stuff for the Saturday "yard sale" the church is having (I begged off helping SELL, I have no stomach for people bringing something to me and asking me if I'd accept 10% of the marked price AND ALSO I do not want to be in an enclosed room for many hours with lots of strangers coming through. The people running the thing seem unbothered by that, but I'm not. And anyway, I need Saturday to finish the fieldwork)

But then I got home to quick eat lunch. And I remembered I was "co hostess" for AAUW tonight, which meant I needed to get some kind of snacks, and while back when we were meeting the last few times before the pandemic the snacks had shifted from "some kind of fancy snack cake made from scratch" to "cut up fruit and cheese," still, getting those things takes time. And I realized that I felt, in Bilbo Baggins' words, like butter scraped over too much bread, and I just COULDN'T.

I can go and help tomorrow afternoon, they will still need people then.

So I planned to go to Mart of Wal (which usually has more of a selection) and I even contemplated buying those slice-and-bake cookies if they had the Halloween ones, because I thought it would be fun to bring those (They didn't, so I got frozen macarons, which are thawing right now, and those will probably be better and are arguably less bad for you, but I'm slightly disappointed. Not disappointed enough to take a side trip to Pruett's to see if THEY had the cookie dough).

So I got the macarons, and a "charcuterie tray" and some cut up pineapple, and a bag of "halloween mix" candy (because you have to have SOMETHING halloween). And a bottle of unsweetened iced tea (there are people who avoid sugar, hence the charcuterie tray and the pineapple) and I wanted cider, but they didn't have any, so we're going to make do with apple juice.

(Of late, the wal-mart has been really spottily stocked, and it makes me anxious, a little bit, because I wonder if we're seeing the start of some really bad supply-chain disruptions, and where I am? we're a little more remote and might be the last to get supplies).

Then again: they had the "angel hair coleslaw" cabbage that I use to make okonomiyaki, which I really, really like, so I'll be making another batch next week, and they had the "Killer Bread" everything bagels that are the best bagels I can get locally, so I have a few more tasty things for meals this coming week. (And I don't have to plan an early Saturday trip out before going to the field)

But before that, I did a little errand that wasn't *urgent* but that I wanted to get done. The battery in my Stitch watch died, and I didn't realize it yesterday until I was out the door, so I just wore it and reminded myself I couldn't use it as a watch.

I also had two Eeyore watches that had run down on batteries during the pandemic, and I just never went out and had the batteries replaced - first, because "nonessential" businesses were closed, then because I wasn't going IN anywhere I didn't have to. But it was time.

One of them, I was apprehensive about - once before when I took it somewhere (a different place), they told me "We can't open the back, you should just get a new watch" but that seemed unlikely (most watches that are more than 2-3 bucks are made to open!) and so I hung on to it.

I took them in to the local jewelry place that I knew did watch repair. Handed them over to the woman and said "I know the one Eeyore watch might not open up, I'm okay with it if the battery can't be replaced." She said "give our person a couple minutes" (I went next door and looked around in the tiny gourmet shop and bought a cider-scented candle) and when I went back, she came back out with a smile and said "They all work!" 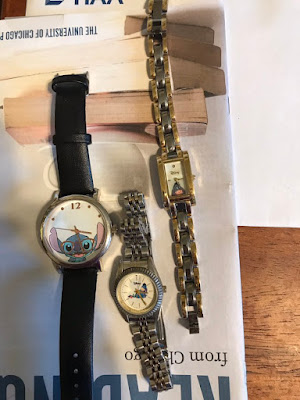 It was $30 for all 3 but it's worth it to me because I can't get most of my watches open myself (I got the Stitch one open, but couldn't figure out how to get the battery out - it's encased in the shockproof buffer inside the watch) and now I can use these again. Yes, I only paid about $25 for the Stitch watch but being able to use it for at least a couple more years is worth the $10.

I now have five working watches: these three, plus the Kermit the Frog watch I'm wearing today, and a Minnie Mouse watch. Yes, all my watches have cartoon characters; it's a tiny joy I can have in my daily life.

I've always worn a watch and even though MOST of the classrooms have proper clocks in them and my office computer has a clock (and I have my cell phone in my office or out on field labs), I still like having the wristwatch; at this point it's partly a comfort-object to me.

Posted by fillyjonk at 3:50 PM

There is something empowering about saying NO.
It's difficult for people like us to recognize the difference between CAN I do something (yes, we are capable) and SHOULD I do something (maybe I don't wanna, or had something else in mind for that time/energy)