I think I started these back in 2018, and I remember posting last summer about making a little progress on them 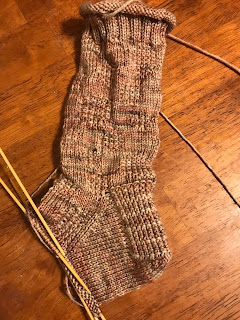 This is just the first sock. I've decided I will try to finish them even though it's really slow. The pattern is called "Stroop Stroop Socks," the design is a slipped-stitch design designed to look a bit like stroopwaffels. 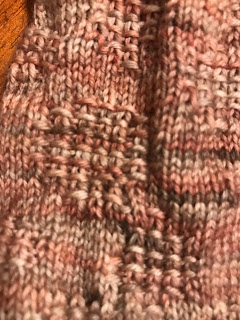 Slipped stitches are slow to do, and also because it's an irregular pattern (scattered "waffle" rounds on a stockinette background), it takes a lot more care of counting. It would be faster if it was just bands of the slipped/purl alternating stitches because then you would not need to count. 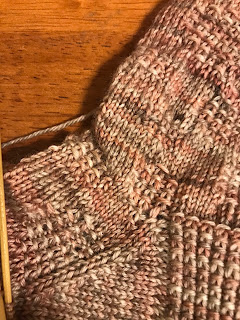 the pattern continues down onto the foot. I'm up past the gusset decreases now, so it's just keeping track of the instep.

I do want to finish the various stalled-out projects I have - I've got a bunch. I'm thinking though maybe one or two will just get ripped back. I have a pair of cabled socks where one needle came out and a bunch of stitches dropped and it might be better to go back and start again. And I have some fingerless mitts I'm not happy with - I used a heavy fingering weight and the fabric it's making is stiffer than I would like, so I might just rip those back and use that yarn for something else. I hate ripping things back but that's preferable, I guess, to having stuff sit in a knitting bag forever unfinished.

I also have a pair with a handpainted yarn where I don't love the colors - sort of a rusty orange and turquoise, and it doesn't work for me. I'm considering finishing those though (they are just simple socks) and seeing if my mom would like them - her taste in colors is a little different to mine, and she might like them.

I finished John Dickson Carr's "The Case of the Constant Suicides" last night (spoiler alert: they are not all suicides). It was....less-good than the other books I've read by him. I liked "Hag's Nook" and "Death Watch" (I think maybe "Death Watch" was my favorite of the two). This one kind of dragged towards the end, a long, long explication of who and how it was done, and also, I get the sense that Carr was trying to "play fair" (e.g. giving hints) but I missed them and I was annoyed when I found out who did it.

Also maybe the "sudden romance" angle (two distant cousins meet for the first time and do the enemies-to-lovers thing) kind of annoyed me; I don't think that kind of thing is realistic at all - I don't know ANYONE in a long-term couple who was "enemies to lovers"

It's funny because a couple reviewers praised it as his best novel and....I really felt of the four (I think it is, there was another one whose title I forget*) I've read, this one was the weakest.

Nothing really on tap for the weekend. My exams are written and posted (and, please God, may this be the last semester I ever have to do online exams) and ready to drop when their day rolls around. I have some grading, might be able to do that tomorrow before my biostats class - I am prepared for that, that was today. Next week is finals and while I will be in, there won't be as much for me to do until the finals start to come in. (I will probably work on my manuscript).

I also have to remember to sign up for one of the graduations. They're doing three, so they can space people out, but they're not divvying it up by school, so I don't know if any of our graduates will be at whichever one I choose. We're not REQUIRED to go, and so far no one else from my department was on the list, but after a year of no graduations....I kind of want to go. And I hope at least some of our students will be at the one I pick. (I am leaning towards the Friday morning one, though I want to quick check the long-range weather forecast first, not sure what they plan in case of rain)

I HAVE to do that tomorrow, it's the last chance to sign up or I guess they assume you are not going.

Posted by fillyjonk at 9:47 PM