We got maybe 4-5" of snow - more than we ever have since I lived here - over night last night. I mostly stayed in, did all my accumulated grading, added a few things to the BlackBoard pages, tomorrow I need to record an (asynchronous!) lecture for one of my classes (at least) and post it so people won't be behind for the exam. (I don't like that. It gives me bad flashbacks to late March and April 2020, the start of the pandemic. But I'm going to have to)

I also need to do the stats reading for this week's lecture; usually that's a Tuesday afternoon thing anyway.

Today after I finished my grading I suited up and went out to at least clear the sidewalk (and my plan was to shovel the drive, but I got too cold to do all of that).

On top of my regular underwear, I put:

- wool socks (in retrospect, maybe should have gone with two pairs) 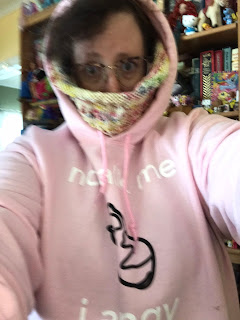 I guess I wasn't holding the camera perfectly steady but I wanted to get out and get to work.

I got in about a half-hour before I started to hurt a little, and was getting some asthma pains, and my feet got wet and cold, so I put the shovel away and went in. The sun did help melt a little more on the sidewalks where I had shoveled, though any wet may freeze overnight (I hope it evaporated first, it was really very dry). I have a bag of kitty litter I bought 10 years ago before our last winter storm, so if I have to I could scatter some out on the walk.

Before that, I saw something kind of amazing. I have two yaupon hollies (Ilex vomitoria) in the yard. They had really been covered in berries and I was surprised nothing was eating them.....but then today I looked out and about 40 robins were all over the trees eating the berries. (At first I was concerned they might have fermented; I have heard the "drunk bird" stories and was unsure what, if anything, I could do to help impaired robins given how cold it is - definitely would not want them to freeze to death).

They totally stripped the trees. And then hunted around underneath them to find any that might have dropped. And then they left...I guess they were fine.

This also made me wonder - some people use things to "predict" the winter - I grew up with wooly bear caterpillars (Dick Goddard, a Cleveland-area weather guy when I was a kid, did a lot with this). Around here, people look at the seeds of persimmons, supposedly if the cotyledon looks like a spoon there will be lots of snow and if it looks like a knife it will be "cold that cuts."

Then again - this is a fluke, this week, this winter has been pretty mild so maybe none of the "folk wisdom" things would predict this

Posted by fillyjonk at 7:13 PM