I came in to the office for a couple hours yesterday and wrote an Anne Lamott style SFD* of the introduction to the soil invertebrate paper. I may need to find some better background research to include, I don't know. Or maybe I just write and submit it, and figure I'll be REWRITING it to an extent anyway, and let my reviewer tell me what sources I am lacking? Maybe that is the secret? Be less perfectionistic and not worry about the paper being "just so" (and still have to revise and resubmit) and do a good-but-not-fantastic job and just COUNT on revise and resubmit? I don't know. Sometimes I wonder if my desire for people to have a high opinion of me means I go to far more work on my own than I have to.

(*S****y First Draft. As in: get the thoughts and words down and don't self edit, just go and figure you can rewrite later on)

But before that, on Sunday, I finally got a backing sewn up for the most recent quilt top: 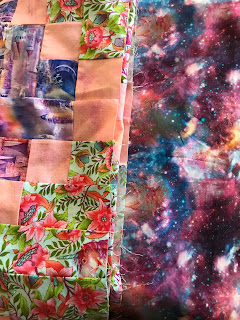 top shown on the left there, or at least a corner of it. The backing was a big piece of cosmic-print fabric from JoAnn's. I liked the print and also the colors work well with the top.

After lunch yesterday I masked up and dropped it off. (I am still worried about the new variant but it seems that masked, short-duration trips where you don't talk A LOT are still pretty safe). The woman working in the shop praised the color choices so I guess that was a crumb of positive human interaction.

I am getting it quilted in a floral design. There was another option but it was very tight and busy and I think with the busier fabrics it would not work as well. It's supposed to be done in six weeks or maybe even less, though any more? Where am I going? I don't anticipate being able to travel for spring break so I will be here. (Six weeks may not even be quite spring break yet).

I've also been working away on the Clinkerbelle Cowl some; I knit a fair amount while watching Ralph Breaks the Internet (well, most of it. I got tired and lost interest and just looked up a spoiler online though I assumed it ended more or less happily, being Disney). I still think the original "Wreck-it Ralph" is a far, far better movie - tighter, less trying to "reach" to be current in a way that probably won't age now (I think a fun game might be "can you spot now-defunct internet sites in the "cityscape" when they go online"). And I liked the "heart" of "Wreck-it Ralph" better - the fundamental idea that you don't NEED a medal saying you're a good person if people who matter to you like you and think you are a good person, though perhaps that's because that pushes a button I have that I know needs to be pushed.

I've also been picking away halfheartedly at the big crocheted afghan; I would like this to be big enough to be done but it takes very long.

And I started a swatch of the giant yarn for the cardigan, but didn't get very far.

And I thought about - but did not sit down and do - working more on the unfinished top using a Charm Pack. But I do want to get back to that.

One of the issues is I feel like I am being pulled in too many directions - plan a summer field season doing something! try to get the current data into maybe-publishable form! keep up with classes! make stuff! clean your house! but also feeling kind of tired, and I often don't wind up doing much, or wind up working on the lowest-effort thing these days.