* Today I find myself thinking of Julian of Norwich. I guess not much is known about her - legend says that the loss of her family in the Plague was what triggered her (in part) to become an anchorite - she had herself walled up in a church to spend the rest of her life in contemplation and prayer (apparently she did have helpers to bring food and carry off her chamber pot).

But yeah - she lived through a pandemic, through the Peasant's Revolt, she apparently had a near-death experience herself.

She wrote a book - Revelations of Divine Love - and I have a copy but admit I have yet to read it because I find mystical writing tough sledding.

But I find myself thinking about being just...shut off from the world. Leaving social media, leaving the internet, leaving my job, going and living somewhere far from people. I mean, I can't interact with people now, I might as well go whole-hog and become a hermit.

That said: I don't have Julian's faith and I doubt I'd have any insights useful to anyone.

* Seeing stories though about some places boarding up in preparation for post-election unpleasantness (apparently George Washington University students were told to stock up on non-perishable foods and any OTC meds they use) and yeah....where are our Julians? Who will make sense of these times? If there is any sense to be made.

I confess: part of the reason of Saturday's shopping trip (and an extra trip to refill my asthma and blood pressure meds just a bit early) was out of an 'excess of concern.' I don't EXPECT anything here but you never know. And driving in today there was a mini traffic jam at the gas station on my way in and I had a moment of worry - wait, should I be topping off my tank, too? But the thing is, if things got bad enough, there's nowhere "safer" for me to go - I don't have a cabin out in the woods or anything, or a big clan of relatives nearby I could hole up with. (I admit in times like these being far away from people who would feel some sense of obligation to help protect me from danger is a concern. I don't exactly have a "tribe" here).

Though it's also possible it's because hunting season started recently here and people were either filling up after coming back in, or before going out.

* I'm also unhappy - without going into too many details, I posted about putting on my garage light elsewhere and someone else way overinterpreted my motives and called me a "Karen" and even worse (I will note for the record, the guys involved, at least the one I know about, is as white as I am). And also - I didn't call the police, a neighbor did. I put the garage lights on - and will continue to do so, at least for a while - because I would rather NOT have situations develop where people feel the need to call the police. Though I will say the guy in question is well known to the local police; at least once every fortnight there's a car parked at his house and they are talking to him. Unfortunately here the police often have to fill in for mental-health stuff, not very successfully.

But anyway. Yes my feelings are hurt. Yes I realize it is petty. But I don't really care: times are so sad and so bad that I just feel like this was a last straw of sorts. (I have left that online community, maybe for good).

I don't like being misunderstood and held up as a bad guy when I'm just trying to live my life with a minimum of trouble. And I still remember the "large bald white man who is a DV suspect" who pounded on my back door late one night and scared me badly. I'm all alone in the world here, so I have to do what little things I can to protect myself, and turning on a bright light seems not so terrible.

I admit that it also brings up bad memories for me of middle school and how kids there treated one another, the busy-bodiness, the looking out for someone to make a mistake that could be used against them. That may be why I reacted so strongly to it, I don't knot.

But whatever. My heart feels broken beyond repairing now; this was just a last-straw sort of thing in a year and a half or so filled with last straws.

* I started a new quilt top but didn't get around to photographing any of the blocks. I tell myself that knitting and sewing is making meaning in life but I admit some days I look at these things and they seem so small and stupid and meaningless - I'm not doing anything useful at work. Other people I hear about are writing publications, or other people are doing the National Novel Writing Month, or other creative and productive things and I just can't. I still feel stuck and the best I can do is cut up pieces of fabric and sew them back together in different patterns and it just feels very futile some days. 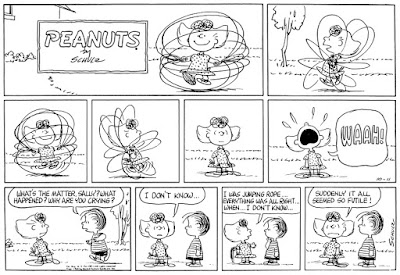 Sally is jumping rope, she suddenly starts crying. Linus, because he is Linus, runs over to check to see what's wrong, and she responds "I don't know...I was jumping rope...everything was all right when...I don't know...suddenly it all seemed so futile."

I think some people didn't give Charles Schulz the credit he was due as a student of the human condition.

* I hope there's something good in the future. That's what keeps me getting out of bed, that maybe a month from now, or a year from now, things will be better. Though I was saying that back in April, thinking by now we'd mostly be out of the pandemic. I'm just tired. I really do wish I could hibernate until it was over.

Posted by fillyjonk at 8:43 AM

I wish I could cheer you up.

That said, our Bible study yesterday, in part, was this from Luke 12:

22 He said to his disciples, “Therefore I tell you, do not worry about your life, what you will eat, or about your body, what you will wear. 23 For life is more than food, and the body more than clothing. 24 Consider the ravens: they neither sow nor reap, they have neither storehouse nor barn, and yet God feeds them. Of how much more value are you than the birds! 25 And can any of you by worrying add a single hour to your span of life? 26 If then you are not able to do so small a thing as that, why do you worry about the rest? 27 Consider the lilies, how they grow: they neither toil nor spin; yet I tell you, even Solomon in all his glory was not clothed like one of these. 28 But if God so clothes the grass of the field, which is alive today and tomorrow is thrown into the oven, how much more will he clothe you—you of little faith! 29 And do not keep striving for what you are to eat and what you are to drink, and do not keep worrying. 30 For it is the nations of the world that strive after all these things, and your Father knows that you need them. 31 Instead, strive for his kingdom, and these things will be given to you as well.

32 “Do not be afraid, little flock, for it is your Father’s good pleasure to give you the kingdom. 33 Sell your possessions and give alms. Make purses for yourselves that do not wear out, an unfailing treasure in heaven, where no thief comes near and no moth destroys. 34 For where your treasure is, there your heart will be also.