As planned, I went out to a Corps of Engineers managed area near me. 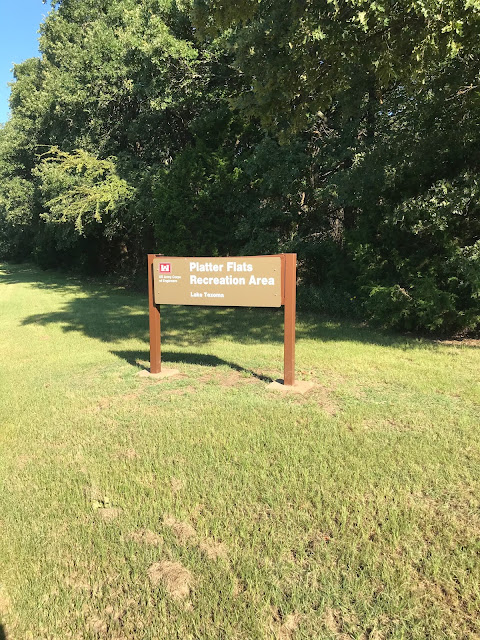 It wasn't as excellent as I had hoped. For one thing, we had heavy rain Thursday night - seems like they got worse than we did in town - and also the trails have been very heavily used by horses, so a lot of them were torn up, and some areas were very muddy and slick. I'm glad I took the big piece of driftwood (probably part of a cedar tree) that I use as a hiking staff, it helped me past some areas.
Also, the camping site adjacent to the trail has been expanded recently (I think) and it was *very* full. I should have realized that but I'm normally only out there on weekday afternoons in fall or early spring with students. I could hear noise and there were a lot of dogs - which is why I cut the trip short, I heard one barking and couldn't tell if it was just the sound carrying over the arm of the lake, or if it was actually coming down the trail I was walking up, and I had no interest in meeting a dog, especially in an area hard to get out of quickly (because mud). No, I didn't know the dog would be mean, but generally - when people let their dogs be unleashed in areas where they're supposed to be leashed, that's also a person who tends not to expend a lot of energy in training, in my experience. (I am also just super leery of dogs whose owners I don't know).
So I only got in about a half hour of walking. Which was kind of a shame because it was really nice 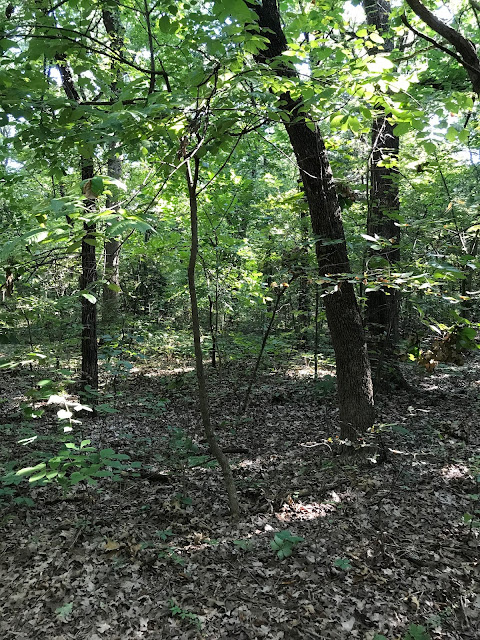 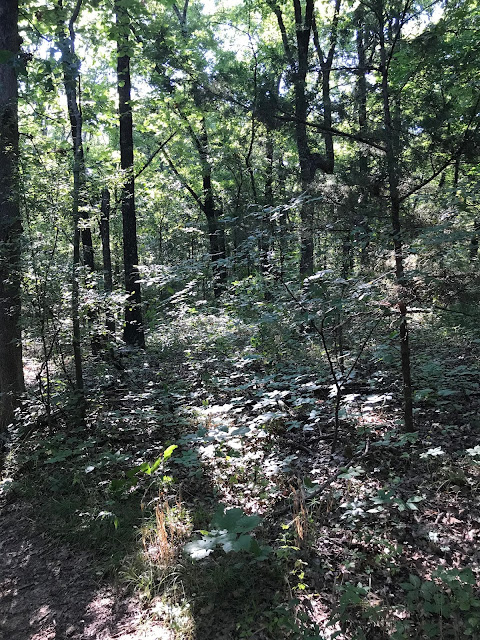 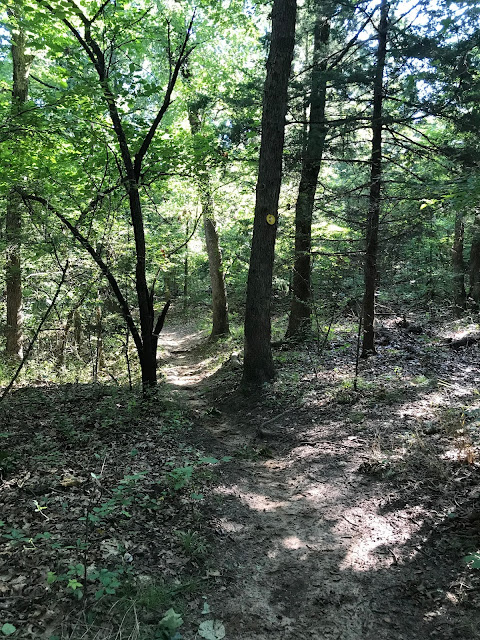 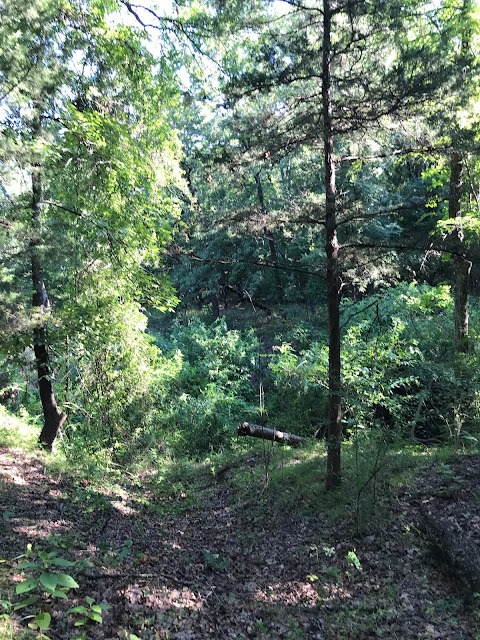 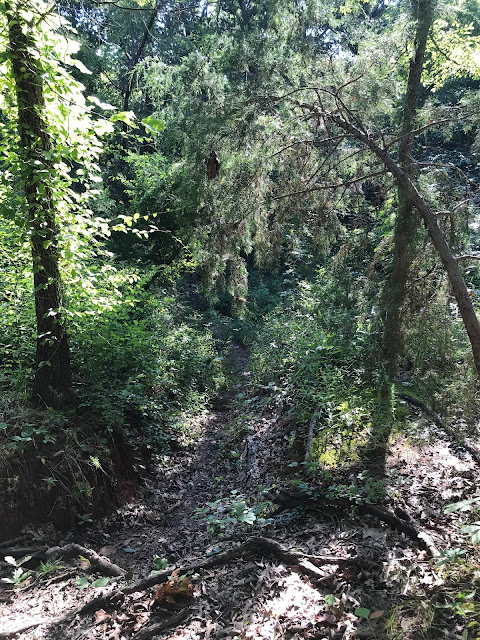 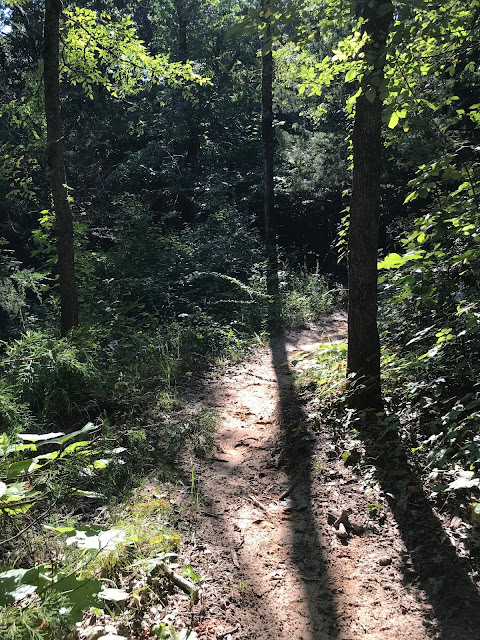 I only met two people - a couple who were on horseback. I was able to step off the trail to let the horses get past me; they seemed pretty well-behaved (sometimes horses shy a bit at an unfamiliar person)
There was one low spot where it was really wet and muddy and hard to get past, it was a good thing I was wearing old sneakers and khakis.
I might go back before classes start, but maybe on a weekday. I could also hear a lot of boats on the lake - there was supposed to be some kind of political-rally-boat-thing today and I didn't want to get hung up in the traffic or noise for that, so.
I also want to try to find more areas I can just go and walk, I might try to go out and do some walking in less-trafficked areas on weekends into this fall, since I can't go much of anywhere else. (I think especially with trying to teach in person it behooves me to minimize any other places I might come into contact with a carrier)
When I left the area, I realized I was about 3/4 of the way to the Amish foods store in Calera, and it would be an easy trip on a back road to get there. And I was out of the pickled baby corn I like for snacks or to cut up on salads. And I figured: I have my credit-card case (left my purse at home for security) and a mask, I might as well go.
It was an easy trip - easier to get there that way than going out on to the interstate and then having to get off it. Offramps and onramps are a place where a lot of accidents happen here. 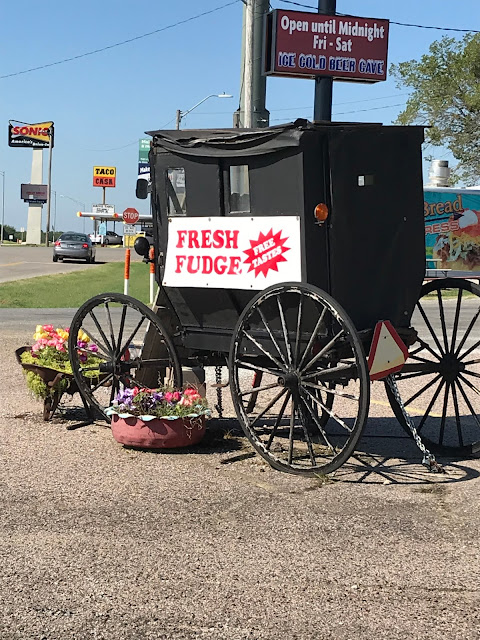 There should be an asterisk on there: no free tastes because of COVID. But that's okay, I didn't go there for fudge anyway. I got my picked corn, and some dilly beans, and a big big jar of honey from an apiary in Sulphur, and a small jar of sauerkraut (I can eat it, in moderation, if I rinse some of the salt off of it first) and a jar of lemon marmalade that I thought might be good on a dessert (like gingerbread) instead of frosting. 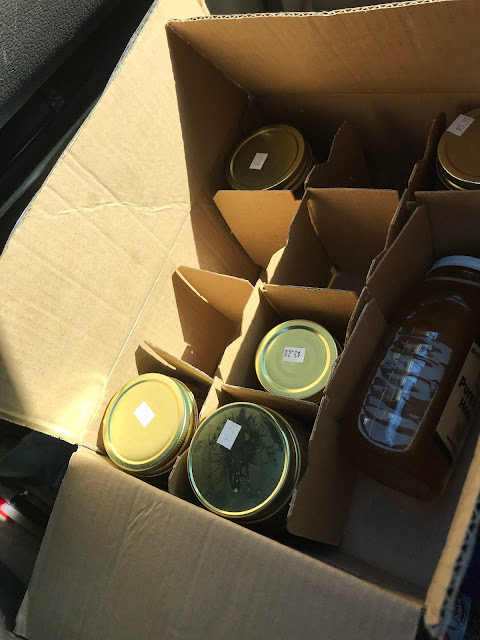 I was the only one in there and both I and the guys working there (it is not actually staffed by Amish people, it just sells Amish products) were masked up, so that was good. I may have to remember that as a place to run to if I need a bit of time away and want some jam or cheese or something.
Also, I actually got mail today! 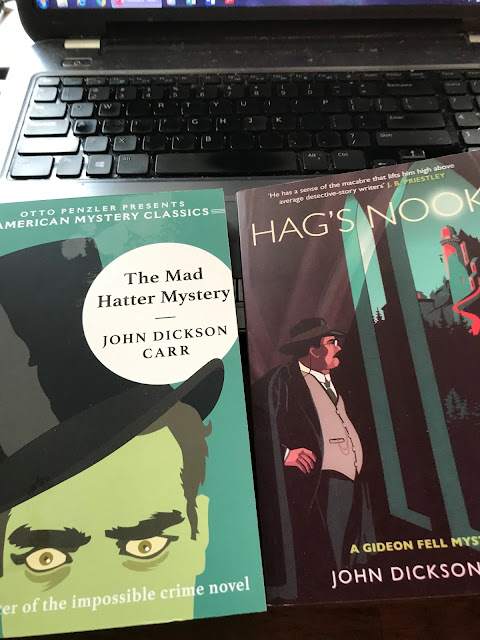 The first two "Gideon Fell" books. I finished "The Crooked Hinge" (which I think is the third, chronologically speaking) last week and really enjoyed it, and decided I wanted to read the rest of the series (at least, the ones I can get copies of - some of them may be OOP). I take considerable comfort from "series" mysteries with a recurring character or characters - it's like revisiting old friends. (I do not like it when a character is killed off, though; a few series have done that at or near the end of the run - "Curtain," of course, by Christie, and also if I remember correctly, Orrie Cather in Nero Wolfe)
I also re-started reading "The Professor's House." I'm going to count it as a "read this summer" book (if I finish it before Sept. 21) because I started again from the beginning and I only got about halfway - I think this was when I was going to be traveling to my mom's for Christmas last year and I put it aside because it's an older hardback (not very very old - but a book-club edition from the 50s or 60s) and the binding is a little fragile and I didn't want to carry it with me.
I had started reading "Everyone Brave is Forgiven," a modern novel set in WWII Britain but I'm not sure I'm up for more wartime reading right now. I know there are sad events that happen in "The Professor's House" (Tom Outland kind of permeates the whole book) but it's different somehow than the mass chaos of children being evacuated and people having to shelter in the Tube and all that.
I also started reading the Asterix omnibus the other night and will hang onto those for nights when I really need something diverting and fun.
I need to do a bit more piano practice but this evening I might FINALLY try to handsew the binding down on one of the recent quilts, and also watch some "Murder, She Wrote" re-runs on Amazon Prime. I decided to give up on "30 Rock" because the humor is just a tiny bit too mean-spirited for me to be able to take. ("Parks and Recreation" is more my style, or your average aimed-at-kids cartoon - the DuckTales reboot has regularly made me laugh, and even though it's "family friendly" it's also clever and makes some allusions that adults would be more likely to get - like, there's an older episode that draws on both the 1960s-era "The Avengers" spy comedy-drama and "The Prisoner" and I don't know too many eight year olds who are familiar with those)
Posted by fillyjonk at 4:30 PM