The big "Sahara cloud" came over today. It looks kind of like when there are far-off grassfires and we get some of the particulate matter but you can't really specifically see smoke. The little air-quality app I have on my phone (though I am not sure how accurate it is, as I don't think there's an "official" station anywhere near me, so it's probably data from Dallas and OKC that's had the heck splined out of it) said that it was unhealthy for sensitive groups due to PM10 - the bigger form of particulate matter was unusually high
(there are two PM classes in air quality assessment - and they are also "critical pollutants" the Clean Air Act looks at, which is how I know them - PM2.5, which is 2.5 microns and under, and PM10, which is 10 microns down to 2.5. I presume bigger than 10 microns generally is too heavy to be suspended in the air, or too big to cause human health issues)
I didn't really notice much with it - when I went out to pick up groceries (I made use of wal-mart again and they only had to substitute three things so I guess I did pretty well) I could feel it a little in my lungs, and after going out to get the mail and do a walk-around in the garden, my eyes started burning and watering.
It's looked ominous out there this afternoon. I joked elsewhere that "mummy dust content is no more than the FDA allowable amount of bug feces in a bag of corn chips" but it does still look...not good. Oh, not as ominous as when there's wind erosion from fields off to the west (or at least, to me that looks ominous; I've read enough about the Dust Bowl to be concerned when I see it). But still, not good.

And on days when I can't see blue sky, I notice I feel noticeably worse. This was NEVER a thing before, in fact, I used to like the "aesthetics" of overcast skies, but now....I don't know. I don't know what has changed. But on overcast days, I feel like no amount of lights on in the house is enough, and one thing I need to do is get a slim-line floor lamp to put over on the other side of my desk. I have a desk lamp but it seems not enough, and the ceiling light is too far away to do much.
Also, the kefuffle on Ravelry I alluded to - well, one of the threads I've been watching where people are expressing concerns, someone referenced the PTB comment about "but sign ups are actually up" and they were like "guys, you know the accessibility controversy/redesign controversy has hit reddit" and I was like "ruh-ro" and decided maybe a good move is to download my whole library of paid-for patterns....just in case....just in case griefers come and make the site unusable for a while. Or if it gets taken down for a retooling, which would actually be a not-bad thing, if they could address the issues that are bothering people.
So I am using Down It All, and am slowly having the files now transfer into a folder on my hard drive.
I have something like 1200 patterns but those are not all unique; some have multiple files if they exist in translations (you get all the languages when you buy or download one). I hope there's room for it.
I also ordered another flashdrive, it's 128 GB and I have 2.55 GB of patterns so I should be good there, I could just dump them on the flashdrive and have a grab-and-go pattern library. (If I had an old, cheap e-reader that could handle .pdfs, I might stick them on there and have The Biggest Knitting Pattern Book Ever, but I don't, and e-readers don't last forever anyway, so).
Then again, I also have them, at least as long as the computer's hard drive functions (and the flash drive would last after that) in case internet goes away. (Yes, I've been feeling a bit apocalypticy these days, but there's little in the news that assuages that feeling for me)
And yes, this does NOTHING to shut up the gremlin in my head that goes "See, you need to own the actual media, you can't trust things in the cloud at all" and that's why I have something like 10,000 books (not even counting the pattern books, I think - I think I estimated that based on counting the number of books on several 5-linear-shelf-feet and averaging them, and then multiplying by roughly how many feet of shelves I have (plus, um, heights of piles of books that are on TOP of the sets of shelves and on the floor next to my bed). I also like to have dvds and CDs though I really do need to invest in a new CD player for my bedroom, the old one (bought in 1997) gave up the ghost some months back though the radio and clock and alarm-clock feature still work....
Still waiting on stuff in the mail. The Smurfs I ordered a while back are....somewhere in transit. Not clear where. No cards from the card swap anywhere on the radar and I've decided I stay in for one more round, but if I don't get a round 5, 6, or 7 card, I'm going to leave, because it's too depressing to try to come up with cheerful things to write on a card and not get one yourself. (And yet: all the election spam still makes it through). And yes, I know, this is deeply petty of me, but lockdown is making me petty.
I was hoping that all the yardwork I was doing might make me angry and buff, like this cat: 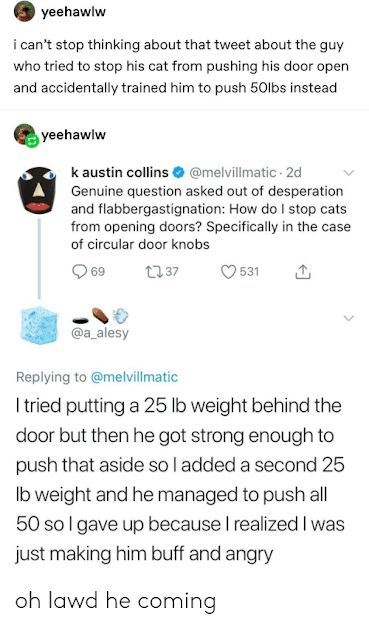 But instead, I think it's just making me petty and focus on things I normally would not be focused on.
Posted by fillyjonk at 6:17 PM