So yeah, tomorrow is supposedly Treat Yo' Self day in the universe of "Parks and Recreation."

So I decided to take this weekend and treat myself. Maybe I do it differently than how Donna Meagle or Tom Haverford would, but it was still a good day.

I went down to Denison first. I was apprehensive, as there was a big fire on Main Street this past week that shut down the entire 300 block. But the shops I wanted to go to were north and south of that, so it worked out.

First, I went to Kaboodles, which is an antique/gift/art shop. I found some good Christmas presents there, and I'm always ready to get presents for people: 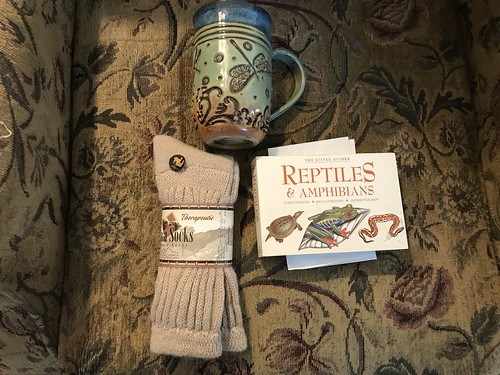 I saw the big mug/vase/pencil holder right when I walked in, and immediately thought, "That looks like something my sister-in-law would like" and sometimes it's hard to find interesting things for her, so I bought it. It's made by a local artisan, which is extra nice. 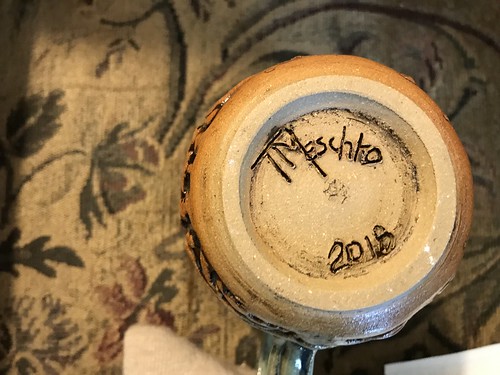 I also might get some fancy tea or hot chocolate mixes that she would like and include those with it.

The socks are for my mom - they sell alpaca products (both semi-local and imported; these were made in Peru) and I decided that I could knit her one fewer pair of socks (time is going to be tight as it is) and give her these; they will be warm if this coming winter is cold.

And the Reptiles and Amphibians book is to go with my niece's present; they live in a wooded area and see lots of frogs and salamanders and I remember when my brother and I were kids, we always had identification books around the house so we could look up "critters" or plants we saw. (The book is used - there is a small used-book corner in the shop and I also bought Antonia Fraser's one on the Warrior Queens).

After that, I went to the antique mall there (and wound up not going to the one in Sherman because I found so many things in Denison (and was also getting tired, and wanted to run a few other places).

The best thing I found was this: 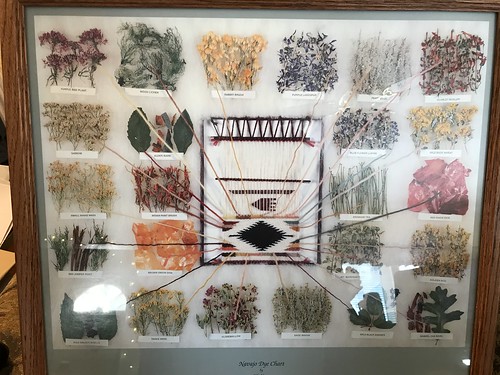 It's a poster of Diné (Navajo) dye-plants.  I REALLY like it, this is an extremely on-brand piece of art for me:

It was all framed and was marked $20 (but wound up being $15; it was on sale). So it was a real score for me. I took down the reprints of some old seed-catalog art I had up (I might find another place for them later on) and put it up in my living room over my sofa; it is pretty perfect for there: 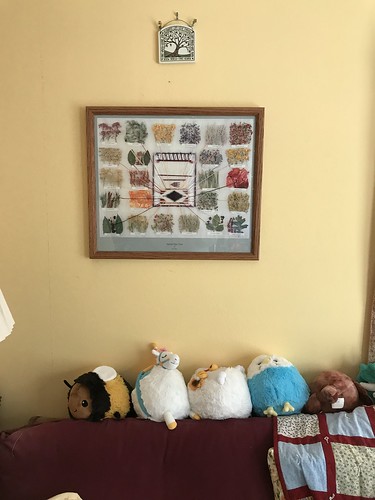 They also had a few booths with older dolls, and I found a Betsey McCall for a good price. I am *pretty* sure this is the 1990s reissue (I have one but with a different hairstyle) and not the older one from the 60s. Her arms need to be restrung but I can do that at some point, it's not too hard with elastic cord) 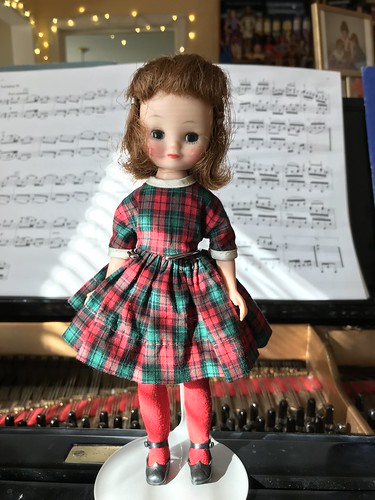 As you might guess from the name, she was a "mascot" of sort for McCall's craft magazines (and the patterns, too, maybe?) I have a few of the old paperdolls that used to be run in the magazines in the 1960s - someone in my mom's family apparently saved them and gave them to me when I was a kid. I never cut them out, just kept them and looked at them.

(Edited to add: the rubber band holding her arms had just let loose; a little finagling with a crochet hook allowed me to reattach it. And I have to look at my reproduction one and see how she is marked; after looking online a bit I have a suspicion this might be the 1950s original - maybe not complete; she may have had a red felt coat too, but....yeah, it would be cool to have one of the old original dolls at a price I thought I was paying for a reproduction....)

I liked the little doll in what looks like a Christmas dress. Maybe I do a little doll display again this year at Christmas and she could be in it. (I also have a couple teddy bears, and even Piglet (!) from Winnie-the-Pooh dressed as an angel).

Another update: Yes, she might well be an original 1950s version! She looks *slightly* different from the 1990s reproduction I have (on the left in this photo; she is wearing a dress I made her), especially the eyelashes and the blush. 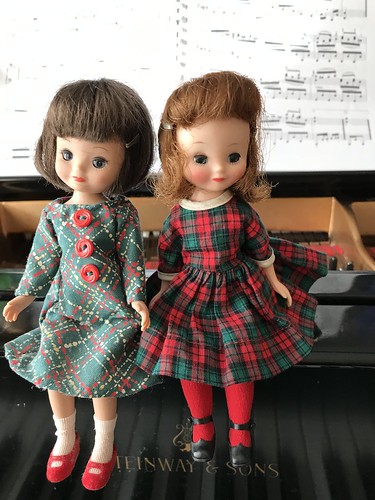 And - the doll I bought today has the mark one of the online doll sites ("McCall Corp" in a circle) says the old Betsys have, and my reproduction lacks it. (Also, old-Betsy is a little fatter than new-Betsy) 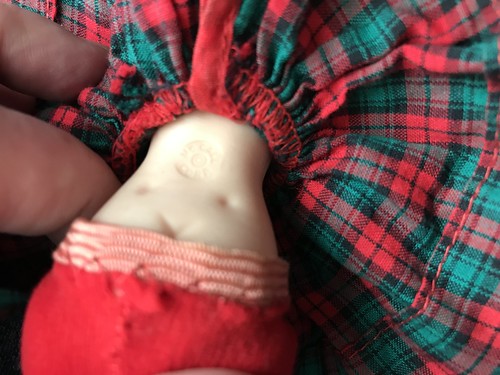 Granted, 1950s "tiny Betsy" isn't a RARE doll, but it's kind of nice to find out the thing you bought figuring it was a recent reproduction is actually 40 years older than you thought it was.

I had walked down to where Home a la Mode used to be (they were the quilt shop/gift shop) and the old house was up for lease. I was puzzled, because I'd got an e-mail from them a day or so before and I just kind of shrugged and thought "Well, maybe they went to a web only business now" and felt slightly sad, and started to head off to get lunch.....and then I saw them in the 100 block of Main....and so I quick ran there.

And I am SO GLAD I did. The new shop is light and airy and bigger (not an old house carved up into a warren of rooms) and the woman who runs it NOW DOES LONGARM QUILTING. And what's more, she does the "pantograph" style where there are many designs (she showed me her book). Lulu and Hazel only do a few, and right now, everything is in flux with them, since both the owners lost their dad (they are sisters). So I might dig out one of my other tops that's unquilted and in a couple weeks take it down there (she said she was working on the "Christmas rush" right now, but for me, I have no time pressure - I could tell her that I'd be happy to have it after the new year). I really like having another quilting option available....

(As I've said: someday, in retirement, I want to buy a longarm machine and either rent studio space, or rearrange my house - like, doing away with having a dining room - so I can have it in my house. And do quilts, maybe not for money, but I could do ones people wanted to donate places, or do quilts for my friends)

I did buy some "charm packs" because I have a number of books that call for those.

And they also sell Jellycat brand stuffed animals, and the slightly-unfortunate looking critter in the photo is described as a "pony," but frankly, she (her name is Violetta) looks like a pony-dragon hybrid, which makes me laugh (given the whole "Spike has a crush on Rarity" subplot off and on in the current run of My Little Pony). So I bought her. 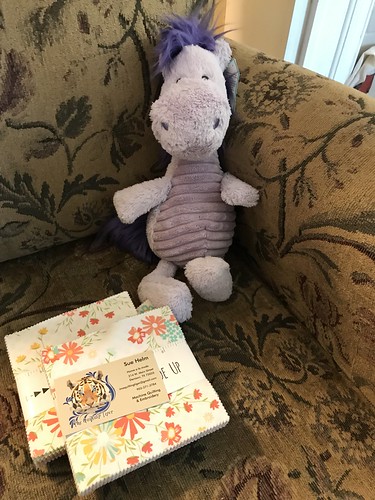 I think it's the corduroy belly (horses' bellies are not a different color or texture from their backs!) that gives the "dragon" impression, on closer inspection she does otherwise look....kind of ..... horselike. Well, if a horse were bipedal.

But yeah. I know I've bought a lot of stuffies of late but they are comforting to have (and to buy) and I like having them around.

I also got the owner's card (in the photo there) so I can arrange later on to take one of my tops to her for quilting. Maybe even when I finish the Tabula Recta quilt top I could have her do it.

I got some lunch, and then ran to the bookstore....and found these.

And yeah, more money, and yeah, I may have a little....problem....with buying gimmicky cookbooks, especially ones with a 'fantasy world' tie-in, but these wound up coming home with me: 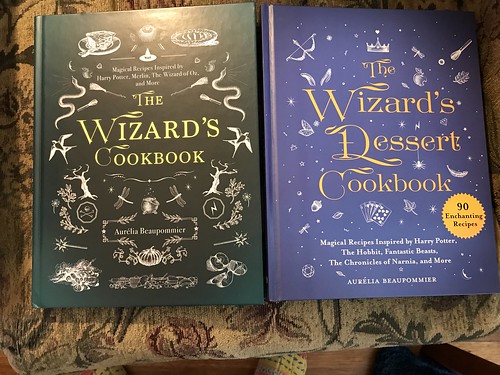 They'll be fun to look at and of late I've needed more inspiration as to what to cook; sometimes I run out of ideas.

The last place (before the grocery store) was JoAnn's, and I spent my $25 gift card, it covered almost 100% of this: 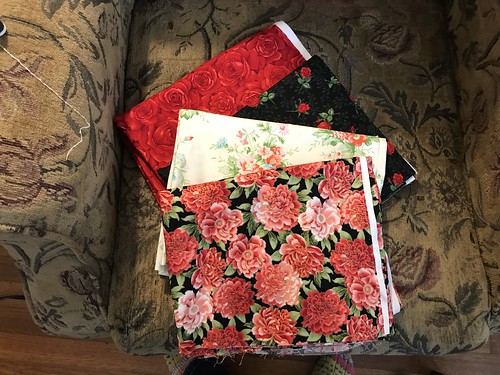 I just like big florals, especially ones that are fairly "realistic." I'm not sure what I will do with these (one-yard pieces; the rose one is 2 yards - they were all on a 50% off sale, so that's just a bit over $25 of fabric there).

I might just do a big-block quilt out of these, or I might do something like Jacob's Ladder with them (and a white background, and other florals) - I have a lot of big florals on hand. Or maybe a churn dash pattern; I've been wanting to do that one for a while.

And one thing I did NOT buy, but surreptitiously grabbed a photo of (they were near the checkout so I had to be careful, I didn't want the employees to know I was "dragging" one of their products, but:) 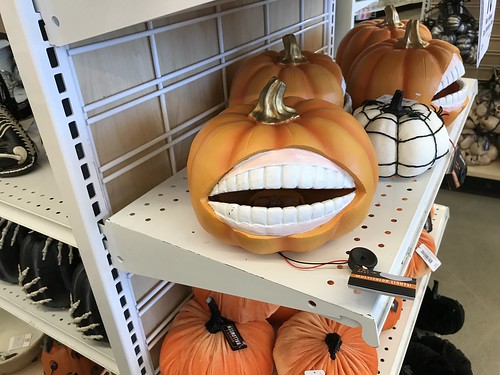 But yeah. A long day, but it means I won't have to go out for a while now - lots of supplies ahead and I even got some Christmas shopping taken care of.

this sounds like a fabulous day. and yay for holiday shopping. altho the pumpkin with teeth?? whut???