Kelly did this, and so did Roger, so I guess I will, too:

Did you keep your New Years' resolutions, and will you make more for next year?

I kind of failed really early at "Don't take responsibility for things that aren't your responsibility." I haven't really made any for 2019, though I do think "when people get down in the (figurative) mud on stuff, you don't get down with them" would be a good one, though that's something I already try to do, so....

Did anyone close to you give birth?

I can't think of anyone.

Did anyone close to you die?

Ugh. Yes. Steve. And Gordon. And Gail W. - all people I knew from church. And yes, this is something I dread thinking about, with parents in their 80s and other relatives and loved-ones in somewhat fragile health.

What countries did you visit?

I am not much of a traveler. I am not a good traveler - I don't cope well with the various reverses and bad surprises that transit brings, so I tend not to travel...

What was your biggest achievement of the year?

Working with a research student, I guess. Surviving? That seems like kind of a weak achievement (anyone alive right now survived 2018), but there were some not-so-great things in the year.

What was your biggest failure?

I should have planned more research and tried to do more.

What was the best thing you bought?

Oh, man, I don't know. Do services count? Getting my garage painted by someone who knew what he was doing and had the right tools to do a good job was a pretty big good thing.

Many of our students, who worked against unfavorable circumstances (not much family support, having to work long hours, etc.) but still wound up earning degrees and honors

Whose behavior made you appalled and depressed?

People who enjoy dumping all over the simple nice harmless things other people enjoy because...I don't know, it makes them feel like big people or something. Politicians. People who dump their responsibilities on others and run. People who are abrasive for the sake of abrasiveness. People who insult others for the color of their skin, their ethnic background, or other things that are not behaviors and that are things over which the other people have no control.

Where did most of your money go?

Utilities, food, putting some away for retirement. Lesser amounts for books and yarn and toys.

What did you get really excited about?

The achievements of some of our students, FINALLY seeing a paper in print, going to go visit friends.

Compared to this time last year, are you happier or sadder?

Pretty much the same, maybe a little happier. Definitely happier than I was in August or at the end of February.

A little fatter, thanks to Christmas break. I can probably undo that fairly quickly with a little care.

A little bit financially better off, thanks to my university doing better than they had been doing and my uni president deciding that it was a good thing to pay back some of the missed COLAs to the faculty, as a morale-improving exercise (but perhaps more importantly: thinking it was the right thing to do)

What do you wish you'd done more of?

Laughing, hanging out with people I care about, reading, knitting, playing piano

What do you wish you'd done less of?

Worrying, listening to other people's complaints about their lives (or their humblebragging about things that just made ME feel bad)

How did you spend Christmas?

Quietly, with my family.

No, not in the sense I presume this question means. It's been a long time since I even had a crush, and that's a little sad

How many one-night stands?

See the above question. (In other words: zero)

What was your favorite TV program?

Definitely a fan of "The Good Place," and one of my January at-home plans is to watch through Season 2, and get Season 3 (which I mostly didn't see when broadcast) when it comes out on dvd.

Do you hate anyone now that you didn't hate this time last year?

I feel like hate is kind of a useless thing to feel. I may be deeply disappointed in some people's behavior and wish they chose to be otherwise, but I don't hate anyone. I think hate is more corrosive to the hater than it is to the hated.

What was the best book you read?

Among novels, probably "Miss Mackenzie" (more on that in a later post), in nonfiction, maybe "Sabbath as Resistance."

What was your greatest musical discovery?

I can't really think of any.

What did you want and get?

A couple of books (one a nonfiction book about the Tower of London's Ravenmaster) that I'd been wanting...hard to think of much else other than maybe things I bought for myself. Oh, I got the reproduction Snuzzle (My Little Pony) for my birthday this year.

What did you want and not get?

The things I want most are not literal things: more time, more equanimity, for those I love to have positive resolutions to their health challenges...

What were your favorite films of this year?

I am not a big watcher of modern films. I did see and enjoy a little bit of fluff called "The Great Rupert" over break but it was a movie made in the 1950s.

I did enjoy "Paddington" and I might get and watch the sequel.


What did you do on your birthday?

I worked, and wound up having to "float" any celebration until a later weekend. That is how it usually goes.

How would you describe your personal fashion concept in 2016?

Same as it always is: dresses, mostly, some of them bordering on seeming sophisticated but most of them either slightly goofy and out-of-style or verging on the Boho-chic Earth Mama look.

What kept you sane?

My hobbies, my friends, my faith

Which celebrity/public figure did you fancy the most?

If they mean "fancy" in the British sense, I can't really think of anyone. There are a few gentlemen in movies or on tv who make my heart beat a bit faster when I see them or hear their voices, but in the sense of truly "fancying," no. I'm getting a bit old for that I suspect.

What political issue stirred you the most?

Oh gads no. I'm not going there. Sorry.

Who did you miss?

The various loved ones I've lost in recent years. I also miss being closer to family and to a couple of friends. If only there were some way to tesser so we could travel fast across hundreds of miles...

Who was the best new person you met?

I didn't meet that many new people over the year. Students are generally kind of ....ephemeral....acquaintances because you know they'll be moving along. Maybe the bell choir director? I don't think I knew her before 2018.

Tell us a valuable life lesson you learned in 2018:

If you take selfies, post your six favorite ones:

No real selfies, just webcam shots. And not "favorites" so much as ones from every other month of the year: 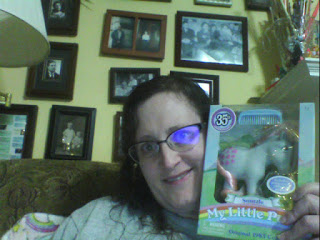 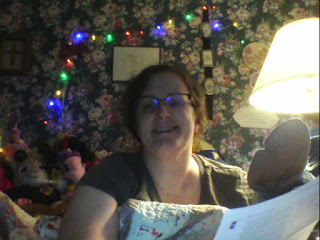 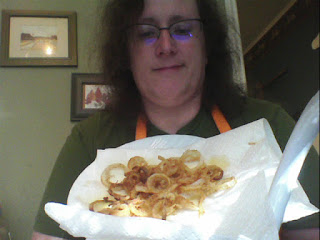 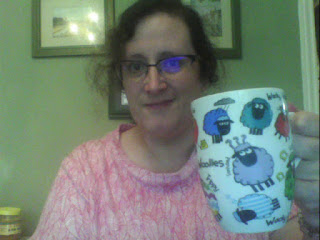 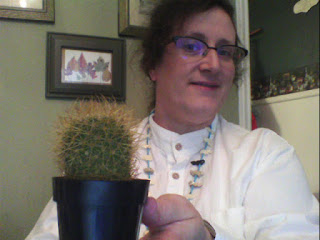 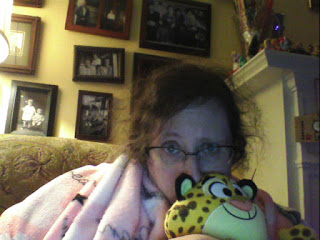 Quote a song lyric that sums up your year:
I'm not good at this. I'd love to come up with something deep and meaningful and DIFFERENT from what I've posted in past years, but I keep hitting on one (rarely-performed) verse of Leonard Cohen's "Hallelujah" as something that pertains to my life

I did my best
It wasn't much
I couldn't feel
So I tried to touch
I've told the truth
I didn't come to fool ya
And even though it all went wrong
I'll stand before the Lord of Song
With nothing on my tongue
but Hallelujahs...

Posted by fillyjonk at 7:39 PM

Getting the painter ABSOLUTELY is an accom[plishment.
Our basement project is in year 3. Or 4, I've lost count...