Well, I finished a Thing, but of course Flickr is down right now (grr) so I can't upload my photos there just yet. Well, let's give ol' Blogger's photo capability a try.... 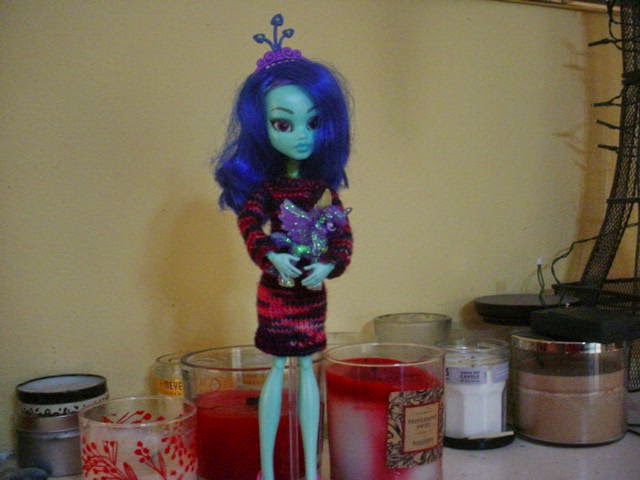 Okay, I guess it works. (Flickr can't be totally gone for good; the photos I have posted from there from earlier still show up on this page).

Anyway. This is the finished knit "Monster High" dress on the "create your monster" that I named Pandora Peahen.

The dress is designed to be knit flat for the bodice part, then switched to in the round for the skirt (and the sleeves added last, knitted on to "held" stitches). I misread the pattern and knit the top in the round (I was WONDERING why it was knit as garter in the round when the skirt was knit plain) but it's still possible to get it on the doll by going from the feet up.)

Here's another photo, without her holding Princess Sparkly Twilight Sparkle (a blind-bag figure from one of the Pony waves) and with her peacock tail on: 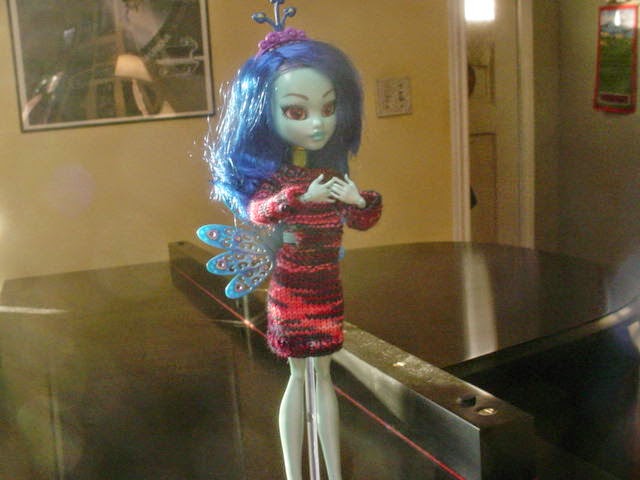 It was a simple enough pattern to do, and while it's not as fashion-forward as the commercially-made clothing, it is more modest (and it would be warmer, I mean if she were a real little person). And it's kind of fun to do these sorts of things. This dress took less than 50 grams (probably closer to 25) of sockyarn....I plan to make versions eventually for all four (yes, I bought three more over the intervening months) of the different dolls. Another one of  the create-your-owns that has kind of an ocean theme and whom I have named Maureen Algae (get it?). And a Draculaura and a Frankie Stein. Because they are the two main characters and are the two "nicest girls" of the group (at least from the few cartoons of it I've seen....) And I felt like I couldn't have Draculaura without her BFF (Frankie). So anyway.

I also have a sewing pattern I bought off of Etsy for some very nice looking little dresses (some of which have vaguely 1950s styling) that I hope to make some day.

The dolls are a lot of fun to pose because they're jointed at the shoulders, elbow, and wrists and also the hips and knees. (I will again say I wish Mattel would sell just packages of shoes for them, or sort-of-generic clothing (e.g., tights, underthings, plain dresses). When I was a kid, as much as I ever played with dolls, a lot of the fun was in having lots of outfits to mix and match.

I bought myself a little "treat" to make up for the bad week. (I was going to get blindbag ponies, but none were available). Instead, remembering my desire to refresh my mind on algebra (before trying to tackle the couple of "Calculus without Tears" or "Calculus for Busy Adults" type books that I want to read in the hopes of FINALLY cementing how it works in my brain), so I ordered a Danica McKellar book called "Hot X: Algebra Exposed!"

I hope it's as entertaining as the title. (I know she has a couple other math-related books out, and of course her degree is in math.)

I probably remember more of algebra than I think, but still, it will be good to review.

Posted by fillyjonk at 5:44 PM