I mentioned a few days ago that I was working on a crochet project that amused me. I finally finished it. 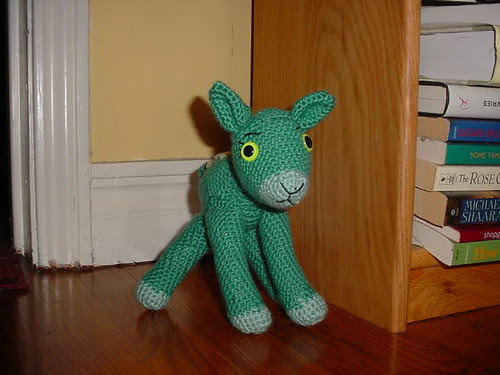 Yes, a literal teal deer. Or rather, Teal Deer, as she insists on being called.

Teal Deer disapproves of people who talk too much. Of people who give long, sad stories about stuff when they could probably recount their woe in a few sentences. 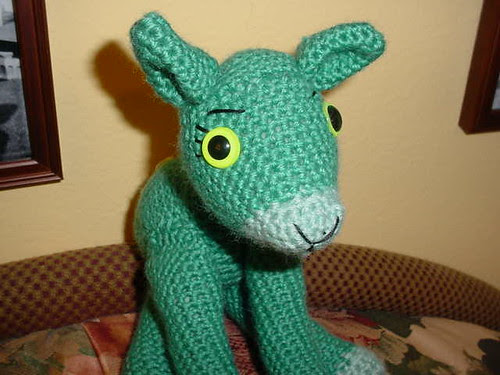 Teal Deer is good at being disapproving.

Teal Deer especially dislikes it when people make long-winded, bizarre excuses for why they "couldn't" do what they were supposed to do. (Thus, she and I have something in common.)

Teal Deer is made using the "Fawn" pattern from Elisabeth Doherty's Amigurumi book. (It is the same pattern I used for Rupert, a couple years back).

I had been thinking about this for a while - how it would be funny to encarnate (en-yarn-ate?) the Internet slang "teal deer" (an expansion of tl; dr, which stands for "too long, didn't read" - sometimes used dismissively to refer to someone's post of something, but more commonly now, I see it as someone imposing the "teal deer" on themselves and then giving a short summary for those who don't have the time to read a long, drawn-out story.)

And of course, I had a deer pattern, and some teal-ish yarn...so all it took was some time. I actually started Teal Deer this summer but then got busy and distracted with other things and only got the barest tip of the nose done...so I finally finished her just now.

This is the kind of thing that I find very funny for some reason. I suppose it's related to my love of puns.

The yarn I used was one of Debbie Stoller's new yarns, I think it's Bamboo Ewe (a bamboo/wool blend). The eyes are done a bit differently than on the original pattern - just the lock-washer eyes without the fancy "shadows" on them. (And I found it hard to get a truly "disapproving" expression on her. I probably should have drawn it out on paper first, but it was getting late and I wanted to be finished and so I just kind of winged it. So I guess Teal Deer is more benign looking than I originally intended; there's almost a tiny smile there playing around her mouth. Or maybe it's just hard for someone with my personality to make a truly grumpy-looking amigurumi).

Also, Teal Deer has spots. They are made from some vintage mother of pearl buttons I got inexpensively in an antique shop. Most of them are odd buttons (not with a match) and I guess they are off of either infant's clothing (back when no one worried about buttons being a choking hazard) or undergarments; the buttons are all the "shank" type, but on these the shank is carved integral to the button, and they are kind of a pain to sew on. But I used them here because I wanted to use some, and this seemed as good a use as any: 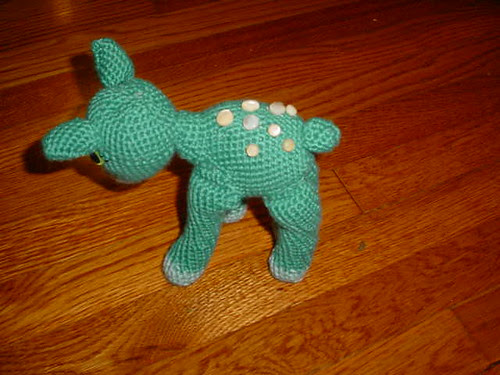 So: Teal Deer. Teal Deer says "People talk too much." I suspect she's not a fan of political talk shows.

Posted by fillyjonk at 9:46 PM

We owe it to the blogosphere to include a link to the Teal Deer every time we invoke the sacred letters tl; dr.

Found myself here thanks to a comment here. This is quite dear, er deer.

This is great! Love witty little cute things like this.