I WAS originally going to post Not Waving but Drowning, which I always thought was an interesting poem, but as I thought more, and thought about the state of the world and such, I realized I wanted something more celebratory, more touching-on-human-kindness.

I know I will not be the only knitblogger doing this to post this poem, but I do not care:

Ode to my Socks.

Mara Mori brought me
a pair of socks
which she knitted herself
with her sheepherder's hands,
two socks as soft as rabbits.
I slipped my feet into them
as if they were two cases
knitted with threads of twilight and goatskin,
Violent socks,
my feet were two fish made of wool,
two long sharks
sea blue, shot through
by one golden thread,
two immense blackbirds,
two cannons,
my feet were honored in this way
by these heavenly socks.
They were so handsome for the first time
my feet seemed to me unacceptable
like two decrepit firemen,
firemen unworthy of that woven fire,
of those glowing socks.

Nevertheless, I resisted the sharp temptation
to save them somewhere as schoolboys
keep fireflies,
as learned men collect
sacred texts,
I resisted the mad impulse to put them
in a golden cage and each day give them
birdseed and pieces of pink melon.
Like explorers in the jungle
who hand over the very rare green deer
to the spit and eat it with remorse,
I stretched out my feet and pulled on
the magnificent socks and then my shoes.

The moral of my ode is this:
beauty is twice beauty
and what is good is doubly good
when it is a matter of two socks
made of wool in winter.

(I always feel, after that last section, that I should say something like "Pax Vobiscum" or "Thus endeth the lesson" or SOMETHING.)

Anyway, here are my own warm wool socks for today, knit by my biologist's hands: 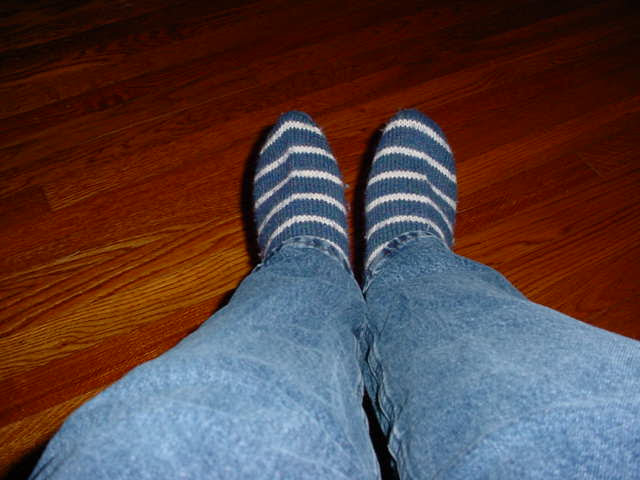 They are what I affectionately think of as my "Mr. Hulot socks" as they were knitted in imitation of a pair that Jacques Tati (as Mr. Hulot) wore in the movie "Mon Oncle." They are very simple socks, knit of sport-weight yarn. The pattern is seven rows of blue and two rows of white. They're not EXACT replicas because Hulot's socks were apparently machine made and had the typical "hourglass" or diagonal heel like machine made socks. I used a flapped heel because that fits my foot far better.

And Glampyre (Stefanie) is back! I had taken her blog off my blogroll because I kept getting this "you must log in with a password" message - and I figured, well, maybe she had some reason to make her blog invitation only, and I didn't get an invite. And I was in a bad mood that day, dealing with other "rejection" issues, and so I thought, well, if she doesn't want me to read her blog, I'm taking it off the blogroll.

Fillyjonk's rule of life #1: Never attribute to malice what poor communication* can explain.

She had some re-development issues and the blog just took a while coming back. So it's back now, and she's back on the blogroll. I did take the "empty spot" to add Jennifer, who comments here quite a lot, and who has a career similar to mine. (But Jennifer stays now that Stefanie's back; the blogroll just gets a bit longer).

(*The original version says "stupidity" but in this case the only stupidity is that of a computer or an ISP.)

KING-fm just started playing Boccherini's "Minuet" from the String Quintet in E. The very one so famously used by Prof. Marcus and company in "The Ladykillers" - the movie I was kind of obsessed by a couple weekends ago. I had to laugh at my instant recognition and my mental image of "Mrs. Lopsided" going about her business.

***
I also FINALLY realized adding a Bloglines sub button was not all THAT hard - probably too late to gain any readers who go "meh, I'm not reading any blog without an easy Bloglines subscription link." But whatever - I'm kind of slow on the uptake of a lot of technical things.

Posted by fillyjonk at 7:07 AM

This is great. I love my socks, too. Thanks, also for an uplifting positive poem on this socked in gray day (pun intended).

Knitters are simply the best.

I did not notice that you had put me on your sidebar -that's really cool and as far as I know the first time my new little blog has been linked by someone else. It's silly how excited that makes me feel. I also had wondered what was up with Glampyre and am glad to see she is back.

The socks are really cool! Have a great weekend.

I'm so warped by the Simpsons, that whenever I see a Pablo Neruda poem, I think of that conversation between Bart and Lisa about having a soul.