*Still can't with What Almost Happened the other day. I have now lived through two VERY big (nationally speaking) things, and several smaller regional things, and of course the slo-mo thing of the pandemic. And I am tired of witnessing history. So, while I know some will scream about "privilege" at me, I am gonna just go into my lane and focus on my own life. Because I have no power to change anything and there are louder voices than mine that are speaking out.

* Didn't get the Christmas-color themed sock done, even by Epiphany, but I might finish it this weekend. I do want to dig out one of the stalled projects and re-start it. The Pocketses vest would probably be the easiest "big" project to pick back up - I have the back done, and almost one entire front done, so maybe I could get that one done fairly soon. (I even have buttons for it! Tucked into the project bag for it).

* I ran out the other day because I needed a couple of things from Lowe's and also I needed that "rat cage enrichment" I talked about.

One thing I needed was a new doormat. To my surprise Lowe's showed a lot of different ones on their website, and while it took me a while to find where they were (near the carpet), I found one I liked: 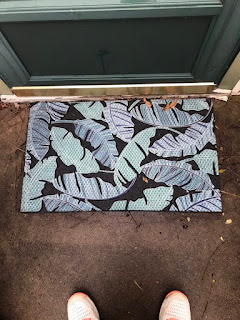 So I put away the Christmas one I had out (hopefully the coir dries out eventually) and put this one out. It will work for spring and into summer.

I don't have a door wreath that will work right now (it feels too early to put the pink rosebud heart one out) but more and more, I find these little seasonal things are important to me. Probably a side effect of being home so much. (I also changed out the little "lawn stake flag" for the one with the cardinal and snowflakes. I will have to try to get a spring one and an Easter one and a summer one, somehow. Usually JoAnn's sells these but as I'm not really going out right now...)

* I also went to Lulu and Hazel's. Bought some fabric (Another thing I really need to do is clear up my sewing room a little and finish the in-progress quilt top, and also piece a backing for the "Homebound" top I finished a few months back, as they are once again taking quilts for longarming).

Also, their dog was there! They have a female boxer dog. I figured she had to be friendly because (a) I don't think they'd be the sort of folks to have a mean dog (b) it would be foolish for a shop owner to have an aggressive dog in the shop but also (c) she saw me through the window where she was lying and immediately her whole butt end started wagging, and she started licking the window (!). When I walked in she went up to the little pass-through that separated the room she was in from the rest of the shop and stood with her paws on the sill of that window and (with the owner's permission) I was able to pet her and yeah, she licked my hands and also waggled her butt, so: friendly dog.

It's nice to have a friendly dog interaction after having that unfriendly one a week or more ago.

* I have ordered some fun "general" greeting cards after seeing someone on Twitter talk about "why not just send all your friends Valentine's cards this year?" and while they are not specifically Valentines I might put heart stickers on them (if my Mrs. Grossman's set for February comes before I send them) and they will arrive around Valentine's day (or later, depending on what's up with the USPS).

But as before: if you want a "just fun" card in the mail, let me know. There are a couple people I just generally send to who send me cards also and I have your addresses and you will get one, but if I have never sent a card to you before and you'd like one, send your address. Even international! I ordered more international stamps when I placed my most recent order. (Though I will say - a card I mailed to Canada was returned, don't know if it got hung up or if I wrote the postcode wrong or what, but I could try again).

* Did my weekly grocery run today so I have food ahead. And I'm contemplating baking myself something in the coming week - either flourless chocolate cake, or those pumpkin-chocolate chip snack cakes from a back issue of Cook's Country that I went out and got pumpkin for and then never made, or something.

* I DO have to force my sleep schedule around again to "in bed by 9 pm, get up around 5 if not before to work out" because I have an 8 am class 2 days of the week, and 8 am office hours (though: over Zoom) three days of the week.

And yeah, I am beginning to feel more expectation (of the happy sort) than dread about teaching again. It will be something to do. My classes are small at this point - 11 in one, 14 in another, I think 9 in ecology? And 2 in my graduate level "arranged" class but I never expect very many.

I've got the BlackBoard  pages up and ready, I even thought to put in a little "this is how you navigate it" because I do it a LITTLE differently from some (there is a "forced template" of a folder-for-each-week and I don't care for that, I'd rather have folders for specific PURPOSES like one for the lab assignments, one for the readings, etc.....and I guess some of my intro students were confused by that in the fall)

Posted by fillyjonk at 2:43 PM

Living in a state capital is suddenly very scary