I had to go out this afternoon and get some soil samples. Long story, but: my university got a grant to attempt to put together some "VR" versions of labs (that could be done fully online) and I volunteered for soils because - well, I don't have a lot unusual for next year's post-tenure review, so this can help that. And also, there AREN'T any virtual soils labs out there, and I need something if we're still battling this damned virus NEXT spring.

But to do the labs and be filmed*, I had to get soil

(*I guess that would be "videoed," or "recorded," but the old terminology dies hard for me. I also refer to a collection of recorded music as an "album")

My initial plan was just to go to Platter and get soil from the horseback trail there (where I do forest sampling) but then I decided "maybe I go to the other field site as well."

And then I thought: wait, if I go to that other field site first, then I can go to Platter, I can walk a little for some extra exercise, and I could even go to the Amish store on the way home (Platter is about 3/4 of the way there).

So I did. Fortunately I got my walking in out at the site on the lake (the first site I went to). I got two samples there. 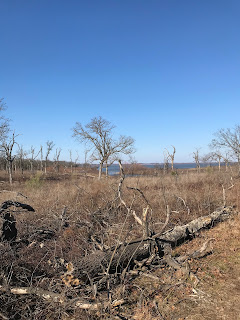 This is what we used to call the "ravine area" (it is not really a full fledged ravine but one of my early research students nicknamed it that and I always think of it as thus). They've REALLY cut it over - I am not sure what the Corps of Engineers' plan is for the area, but they do seem to love to DO stuff - cut or burn or plant food plots or cut walking paths - whether it makes a lot of ecological sense or not. Most of the trees there are gone now and there was a mix of some nice oaks and other things. Though I suppose it's possible they got hypoxylon canker or something and I didn't notice it, and they actually had died - I haven't been out there much in a couple years.

You can just see the lake in the background.

I walked around much of the area - with the added cutting, there are a lot more areas it's easy to get to than in the past. I was cautious; I have reason to believe there are hogs out there and while there are relatively few animals that scare me, hogs are one (humans are the other; you never know who you might meet and while 90% of the people would just be fellow hikers or people walking down to the lake to fish, still - a couple weeks ago a guy running from police after escaping custody was found out there)

I did take my shillelagh though against a really determined person (or a hog) it would be little help, and I had my phone (in case I stepped in a hole and injured myself or something). I walked almost up to the area where a research student and I saw evidence of hog activity a few years ago and then decided it was good to turn around - maybe I walked for a half hour?

Then I drove to the equestrian trail. This place feels a little safer most of the time - it's close to a camping area (deserted right now and might even be closed for the season) and sometimes you meet people riding horses but generally they are good people and as long as you step off the trail and stand very still (so as not to spook the horses), everything's good. 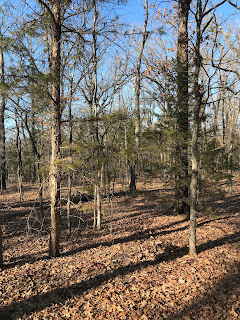 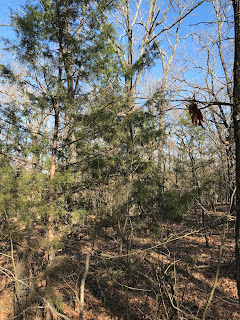 No one was out there today. But I did keep hearing a distant dog bark as I dug (and later walked a little) and I am always leery in that case. because sometimes farm dogs do get out and they're sometimes not the most socialized in the way that I like...But I decided to trust it was far away and walked in a bit to get a soil from a different area. Coming back, I thought, "It sounds like it's getting closer" (and it was a baying sound; at first I asked myself, "could it be waterfowl flying over the lake?" but decided it was a dog) and so I hurried up and got to my car - and I saw it coming as I was about to get in.

I couldn't tell if she had broken her tether, or if the thing sticking up (which looked like an antenna) could have been some kind of GPS transmitter, so "we can let her run but know where she is" but that seems odd.

It was a beagle. It looked like one who had recent puppies and she didn't SEEM mean - her tail was up, her ears were relaxed, and she wasn't coming FAST at me, but I'm still leery of strange dogs so I got in the car and carefully drove off (so as not to hit her; she seemed to want to follow the car but not chase it, which also tells me she probably wasn't a real threat).

So I didn't get in quite as much as I might have wanted.

But I did get to the Amish store - got more of the small jars of the sauerkraut I like, and a jar of apple-cinnamon jelly to try (which might even work as a glaze for chicken, mixed with other things).

Posted by fillyjonk at 8:22 PM

an adventure, of sorts!