This is my reality now: 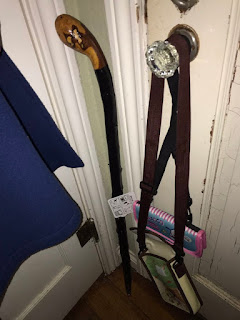 Purse, keys, phone, mask AND NOW shillelagh required when I go out the door. Because I can't trust that that dog won't get loose again. They SEEM to keep it indoors most of the time, but....I can't see for sure until I'm down the porch steps.

At least I can leave it in the car once I get over to work; I can see the parking lot from the building door and if I see a dog (or feral hog, that could be a thing too given where we are), I can call campus police - or, if I've not left my car, just nope out of there. Which I would definitely do, even on a work day, if I saw a hog.

I don't know. I kind of hate this. I wouldn't USE it unless I were in imminent danger of attack. (And I suppose if it's ever icy when I have to go out, it will help protect me in other ways).

Spent the day over at work, mostly reading background stuff for the paper. And now I'm at the doubt stage - that there's not enough there, it's not anything all that new (I found a paper that was an omnibus of other work, and it did talk about flooding effects, though mostly in eastern Europe. I suppose I could present it as a pilot study for a larger project because I see ways it could be done better and more conclusively - but I have no idea if I'd do that or if I want to find a different project for the future.)

I don't often have research ideas these days that I love and I'm excited about; more often it's "Well, I need to do SOMETHING." I might feel differently if I had more help, but the one potential collaborator is in the glide-path to retirement and has decided they are no longer going to do research but write popular-press articles instead (oh, to have that level of confidence/privilege) and student collaborators of late have fallen through.

I don't know. Maybe - I hope - this is just a fallow time, brought on by loss and the pandemic, and maybe things will get better. But still, the "end" (if such ever comes) of the pandemic at this point feels as far off as it did in April or May. Maybe even farther, to me, because I've lived through nine months that I barely remember (because I did NOTHING) and I realize the full horror of six or eight more.

Posted by fillyjonk at 6:59 PM