I baked fruitcake last week; most of it is in the fridge to be eaten slowly in the next month or so.

Last night, I made meltaway cookies. Because I wanted some kind of cookies even though I should be trying to reduce. Part of it is not so much the having as the making: to me, it is normal to bake at Christmastime, and not-baking feels wrong. And too many things about 2020 have felt deeply wrong. So for a bit last night, making the cookies felt right. 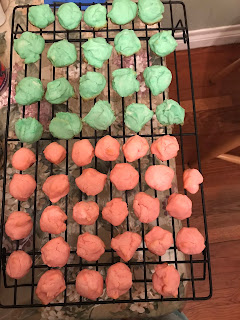 This is a super simple recipe from the old Betty Crocker Cooky (yes that's how it's spelt) book; this is the book my mom always used when we were kids, and now I have my own copy, from a resale shop.

They don't have eggs in them so if you are egg allergic, they work. Also, I presume they could be made with margarine if you wanted them to be vegan, but a large part of the flavor of these is the butter, so...use a good margarine if you are doing that.

2 1/4 cups cake flour (I have on occasion substituted regular flour, using the "2 Tablespoons less per cup" thing but they're not as good)

food color if you want

I divided the dough in half and did half mint (green) and half almond (pink). The funny thing is the pink ones, because they are pink, make me think they are maraschino cherry flavor but I guess cherry and almond flavors are a bit similar.

You bake them for about eight minutes at 400 F. Watch them closely, don't let them brown too much. (They go on an ungreased cookie sheet)

I suspect you could even use gluten-free cake flour (if such a thing exists); the idea is these are very light and short so they don't exactly need the wheat proteins in them.

I'm doing a second batch this evening from this recipe.  I wanted some gingerbread roll-outs; I have a few Hello Kitty cutters and some Pegasus pony ones (Rainbow Dash, and Fluttershy, and Derpy/Muffins) that I have never used. I wound up actually doubling the recipe rather than tucking the other half of the egg away. It seems to work up into a nice dough but it has to chill for several hours so I guess rolling these out will be an after dinner activity.

Edited to add: I got them done. It made about 2 dozen. Not the best gingerbread I've had, and the dough is a lot more finicky than many roll out cookies I've made - get it too thin and the dough crumbles; get it too thick and it sticks in the cutter. I used my three 3-D printed Pegasus pony cutters (I think Purlewe, maybe? had those sent to me from an Etsy shop that did them). Ironically, Derpy came out the best; bits of Fluttershy's mane would break off and Rainbow Dash kept losing her tail. I also have a vintage cutter of Jerry the Mouse (who turns out fairly well) and a pig that might be one of the Three Little Pigs. And some Hello Kitty cutters of a more recent vintage. And a poinsettia: My Blahaj shark came but smelled so awful (a burnt plastic chemically odor) and I was alarmed so I put it in the wash (it says it can be gently machine washed) in case it was anything like a pesticide or some such, and also in hopes of reducing the odor.

I also submitted a detailed "missing package" report on the gift for my sister-in-law and niece with descriptions of the items, and in the case of the things I had photos of, photos. I'm hoping it will shake the package loose and they will get it. Though if they don't, maybe I get the $50 insurance money? Even if it was worth a little more than that. Or if the package broke open maybe they can salvage some of the items and forward them on.

I'm hoping it's just sitting in a sorting center somewhere and will move soon but I figured I'd better do the report; it's been 12 days and it was supposed to be there in 3.

I know all these things (like also being disrespected at the meat counter) are little things, but they really do loom large when one is alone and mostly idle.

I guess tomorrow is trial 2 on a couple things: the bank thing, and me getting enough milk to carry me through until after Christmas. I've decided if Pruett's still doesn't have their case stocked I will just go out to Braum's and get a gallon of their 1%.

I admit I am to the point of missing being able to even go into Wal-mart. It would *probably* be safe if I went early, but *probably* don't cut it during Christmas week  - doubtless there could be crowds of last minute shoppers.

Oh, how I wish we had Instacart or a big supermarket that delivered. I know the Schnuck's in my mom's town delivers, even though you pay a premium for it.

Posted by fillyjonk at 4:58 PM