* I ran out to Lowe's (they are doing a reorganization at the local store and moving stuff around, and this seems like a remarkably bad time to have the aisle-tags NOT match what's there - I finally found what I needed). I bought a "Gonzo brand" odor-absorbing gel (it is in a small carton) that is citrus-scented. It seems to be doing the trick - I can't really smell the citrus unless I am close to it but I also don't smell the cat urine any more, and it was pretty strong. I also found a container of cat-and-dog repellent that is based on thyme and cinnamon oils, and figured it was worth a try, so I dumped a bunch of it near the opening to the crawl space.

* It would be hard to block it off because some of the connections for the mechanicals of the air conditioner run through that space, so I'd have to find someone who could make a made-to-order cover that would fit on - and also, some way to attach it to the masonry foundation.

* I got the accumulated grading done so that helps me feel better about things; I do not like feeling like work is hanging over my head but I just could not bring myself to grade last night. Also yesterday I got all the court cases scanned and e-mailed off to the students so they can start working on those. I said they would be randomly chosen but I admit in a few cases I put my thumb on the scales a little (giving an animal-themed case to someone who expressed an interest in veterinary science, a case about a sportsmen's club to someone I'm pretty sure is a sportsman....)

* Worked a bit more on the scarf (the Tailfeather scarf) during Zoom knit get-together today. I thought I had made a bad error (it's been a while since I worked on it and forgot where I was in the pattern) but in fact I had not. I should work on this more now, it would be good to finish it.

* I also need to think about Christmas presents. I have my brother's planned out (a sweatshirt from the Cuyahoga Valley National Park conservancy, they even have some that say "Established 1974" and that was the year he was born, so that kind of works). And I have the socks already for my mom, and she said she'd put together a list of books she might want and I could order a couple books to go with the socks.

For my sister in law, I'm not sure. I might ask my mom to see if she has ideas, or I might order her a sweatshirt (from another source; she has no ties to Ohio so a CVNP one would not make sense). And I need a few more little things for my niece - I am wondering if I could quick crochet up a small stuffed animal. (She is eight, though.....some eight year olds are very fussy about "babyish" things and I don't know if she'd find one babyish. I mean, I - at 51 - would be thrilled to get a stuffed animal for Christmas but I also know I'm a little weird that way). I will have to think on it more. Then again, she really loved the "crystal growing hedgehog" science thing I got her from Hearthsong for her birthday, so maybe a stuffed toy wombat or something would be welcome.

* I also want to order a box or two of Christmas cards; I realized since my AAUW group is not doing the Christmas party this year maybe I send cards to all the members, if like me they are staying mostly at home "nice mail" would be welcome. (And the offer stands: if you want a Christmas card - and it probably will be Christmas from the assortment I wind up ordering - send me your address. I will have a LOT of time once exams are over and sending out a few cards a day might be good for me)

* I opened up my Amaryllis (they were already in pots) and gave them a little water and started them on the way to forcing for Christmas; I figured this was the year to do this - I've always wanted to force bulbs for Christmas but with traveling, have never been able to.

*And now I do think I will put up the tree after all. Not this weekend, perhaps not next weekend (that time might be spent clearing up the living room more and especially getting the "work books bookshelf" out of here) but during Thanksgiving week, sure. I told my students I would be in town and would check my e-mail from time to time but would not be widely available, and I think I will stick with that.

Having my house decorated for Christmas might help with feeling sad about not traveling. And I have the October gachapon crate I never opened - which I have now decided to save for Christmas morning - and maybe I save the December crates that come, also. And I have a couple advent calendars - I have the pretty Nativity one purlewe sent me last year, and she sent me a chocolate Hello Kitty one (made in Germany so it should be good chocolate). And I have the Schleich "Pony Club" one, so that will be something.

* And yeah, I have to thing of things to suggest to my mom as gifts for me. I will look in the catalogs I know both she and I get - she doesn't really use the internet despite having an iPad so saying "go to my Amazon list" or some such won't work.

There's not a lot I need? I have a lot of books already, more than I will ever read, same with yarn, same with fabric. I could use some more clothes, maybe, a few more skirts, but none of the catalogs has anything I particularly like, and ordering clothes in the time of COVID means going with sacky, loose-fitting things because of inability to try them on. (I don't like fussing with returning things if I can at all avoid it).

* I also ordered my Thanksgiving dinner substitute today - crab mac and cheese from SeaBear, and because you need $35 worth for the "ship on ice" of frozen stuff, a small quantity of smoked scallops for a later date. (The person I spoke to on the phone assured me everything came frozen, so I can just pop it in the freezer until I want it). I arranged for them to arrive early in the week of Thanksgiving so I will have them for the day's dinner. It seemed the best way to do it.

I mean, I'm still sad the damned virus makes it unsafe for me to go and be with my mom now, or at Christmas, but I'm trying to find small silver linings. I'm hoping the coming weeks aren't too bad, news-wise, but I fear they will be (then again: if I am not going out, is there any need to watch the news? Is there any need to know how bad it is if I'm just staying home?)

* One new book I just got - which I'm posting a photo of here because if you have someone who is a bit of a Tolkien fan and also likes cooking, it might make a fun gift: 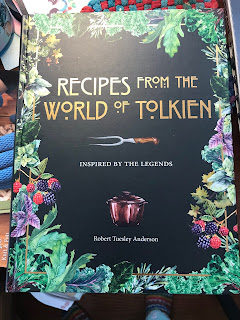 There's a "smoky stewed bean" recipe in there (using canned cannelini beans, but surely would work with others) that I really want to try - maybe tonight, if I can motivate myself in the next few minutes to get up and cook them, I have everything I would need....

I like cookbooks like this. Granted, I'm not enough of an anorak to look at it and go "oh, that's not authentic" or whatever (which I suppose some hardcore fans might do; I have seen a strain in some fandoms that leans towards the intensely humorless and unwhimsical) but I love books like this - I have the Little House cookbook, and another Hobbit themed book, and Tasha Tudor's Cookbook, and a moomin cookbook, and the Nero Wolfe cookbook, and Mme. Maigret's recipes....and surely a few others I can't think of right now. No, I don't use them very often. But they make me happy and are fun to have around. And this one, I DO think I will use, some of the recipes look very tasty in it.

The book itself is nice as a book - this is a hardcover edition (I think it's new this year) and there are really nice watercolors in there depicting either parts of Middle-Earth, or characters from the books, or ingredients (there's a nice one of cherries on one of the pages. Just generally a nice book, and I'm glad I ordered it.

Perhaps another "make it through a hard winter" plan is, ability to get out to the grocery permitting, to make one new-to-me dish every week or so from one of my cookbooks. (And in some cases, it may be things I have everything on hand for already)

Posted by fillyjonk at 5:43 PM