For a week that allegedly had a federal holiday in it, this week sure was long.

But I do feel a little better today. I got caught up (Well, until tomorrow....there is something that I set the final deadline of noon tomorrow on, in hopes that people who didn't have their rears totally in gear would be able to turn out a reasonably good assignment), I did a little house cleaning, my newest-old Pony arrived in the mail and got a spa day.

I think I figured out how to tackle the cleaning/decluttering of my house that got BAD during lockdown/the probably-depressive summer I spent. I actually ironically based it on the stupid phone games I play. I think I've mentioned Homescapes and Gardenscapes before: you do little puzzle games (mostly kind of like Bejeweled or Candy Crush, where you match pieces) and earn stars that you then use to help "Austin" accomplish tasks.(And there are a heck of a lot of tasks....) But the idea of "do a few tasks, take a little rest" maybe is what I need instead of "Ohmygosh I have to clean the whooooole house." Instead, I do a batch of five tasks (and they can be small, small tasks still count but they count equally to big tasks) and then take a break - and I could do a bunch of those this weekend, and then maybe do a few in the early-evenings of next week and keep going with it - so I'm doing a little more than the barest minimum of house-cleaning in the interest of keeping the place a little better.

(It also helps my mood. Clutter on shelves or lots of stuff up on the walls I like, lots of papers scattered around because I didn't bother to deal with them yet I don't like. And maybe it fights against "learned helplessness" or whatever you want to call it - the feeling of lack of agency because teaching college well in a pandemic is nearly impossible - so at least I can keep my house in order)

One thing I did do was finally clear all the canned goods and other "supplies" I had laid in and added to through this thing - putting them away, for some values of "away" - off the dining room table, so I can eat at the table like a civilized person again. It had been nearly six months! During this time, I'd either eaten sitting in my recliner and using a small table, or, once I got the desk, at the desk. I started it because I was watching the news constantly in the early days of this, and then later, I either wanted to hang out on the internet or watch tv so I felt a little less alone. But tonight I ate at the table and looked at my newest cookbook (America's Test Kitchen "Cooking for One," which is apparently BRAND new - I pre-ordered it before it was out and it came last week). I should get back to that; looking at cookbooks often inspired me to try recipes and I have not cooked much recently. One of the first ones I want to try is a chick-pea recipe out of that book, where you braise them with garlic and lemon juice and shallots and parsley. (I hope Pruett's has shallots. If not, I guess I either use scallions or the freeze-dried ones I have on hand)

I also want to do another big batch of the bean soup in my Winnie-the-Pooh cookbook, though that might wait for our next cold snap.

(Heh. And all through this I am picturing the bit from Parks and Recreation where Ben Wyatt protests, "Could a depressed person do this?" when Leslie Knope expresses concern about his state of mind after he was...I can't remember if it was fired outright or put on a leave of absence...and Ben is that kind of driven, workaholic character, kind of like I am a little bit, who wants everything to be perfect.)

Though being able to eat like a human again, at a separate table, helps. And tomorrow inbetween the catch up grading and typing the AAUW minutes and prepping conditional probability for Monday, I will do more short sprints of cleanup/pickup.

I had also ordered a new (old) Pony from an Etsy seller I've used before. She came today - her name is Fifi, she is one of the "first tooth" baby ponies: 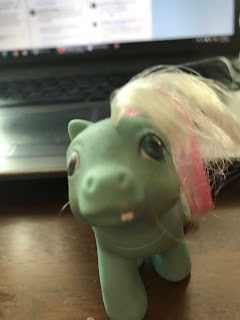 She was a little grubby and smelled like "attic," so I decided to give her a bath - her hair was also in bad shape, though the rest of her is basically sound: 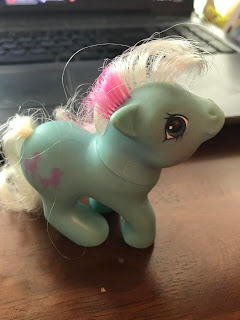 Her cutie mark is two poodles, hence her name.

So in between some grading, I cleaned her up - used Blue Dawn to wash her (she felt greasy, I'm hoping it's just that she was stored somewhere with oil heat - the residue felt kind of like that - and not leaking plasticizer; she does feel better now). I also washed her mane and tail and glopped conditioner on them and let them set. It doesn't seem to me like "human" conditioner should work on dolly hair, but sometimes it does - and it seemed like the hair was a little softer after letting it set for about 25 minutes and then rinsing it out. I used the trick I've seen other pony-people do and wrapped her mane around her neck and her tail around a back leg, and then used paper towels to hold them in place ("setting" the hair a bit, I hope) as they dry 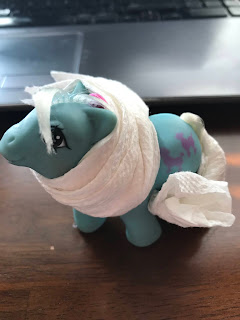 On Twitter I joked "My Little Accident Victim?" She does kind of look like that. I am going to leave it on overnight, hopefully that will be long enough for it to dry. Her little cowlick (which is sticking out in that photo) does feel softer and less-crispy so I am hoping the "bad texture" I was feeling was just a lot of dirt in the mane and tail.

The stamp on her hoof says she was made in 1987 - the year I graduated high school.

One last thing - my hibiscus plant, which has not bloomed in nearly 20 years? The one I thought was dead but decided to repot anyway and stick outdoors for the summer?

It had a bloom 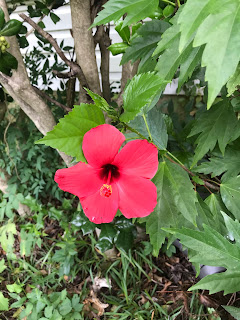 Just one, but the plant itself looks MUCH healthier - I trimmed it back pretty aggressively when I repotted it, and it sprouted a lot of new leaves. I suspect it needs more light than it gets in my house, but this winter it will just have to deal with it, as it's too cold (at least at night) here in the winter for it to be outside. But this was quite a surprise; I didn't even spot the bud forming and then yesterday, there was the flower.

Posted by fillyjonk at 7:46 PM

I worked 8 hours on the Census Monday. What's a holiday?