Thursdays are always a more challenging day - 75 minute classes are hard to keep your energy up for, more so when one is entirely online and you have little to no interaction with people. (I think that's why I find teaching less rewarding right now: a lot of the interactions we once had are in abeyance - people don't come to my office hours just to talk because there's no way to do it distanced, instead they e-mail me if they have a question).

(Remember how first off this semester I said "wow maybe I hold half or more of my office hours over Zoom and do it from home" but ugh, I will be ready to never use Zoom again once the pandemic is over - if it ever is.)

But anyway. I came home and ate lunch and graded the labs from this week and wrote the exam for next week. Considered grading the exam in Policy and Law, but only about 1/3 of the class had completed it (the deadline is 11:59 tonight). So I guess that's for tomorrow.

I did have a couple errands to do some time - had to do some banking (all done through the drive-through now, they're only doing stuff that has to be done "face to face" like loan applications by appointment now) and I had to get gas for the car.

There was a drive-through flu shot clinic on campus today and I briefly considered doing it, but when I drove home at lunch time I saw that there were a LOT of cars lined up and I thought "nope, the thing you hate most is waiting somewhere with nothing to do and not knowing how long it will take"

Then I got to thinking - I kind of want to go to Sherman this weekend (damn the rising case count; I will be careful) and so I will want all of Friday afternoon to work on grading and next week's stuff. So since I was out, I went to Walgreen's. It was nearly 5 pm and I thought maybe they'd say "no, no more shots today, our vaccination hours are 8 am to 4 pm" but nope, they took my information and looked at my insurance card (nearly all insurances pay the full cost of these, which just seems smart to me - encourage people to get vaccinated, you have less disease spread and fewer sick people to shell out money for the treatment of)

I don't like needles but I get that it's important so I did it.

And then I thought "You can get a treat." My first thought was a candy bar but then I saw the Squishimals they had put out (they already have the expanded-for-Christmas toy section going) and they had ONE pastel tie dye unicorn left and I said to myself "Oh no" but I also remembered my lack-of-remorse over buying the big Kirby back the end of February, so... 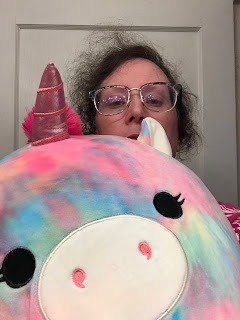 Her name is Esmerelda. (That's a bit of forced perspective there, she is not quite that large in relation to me).

I did also buy more of the oatmeal-bath stuff because my hives are AWFUL this week - I think it's fall allergies and I want to try a warm bath with it tonight to see if it helps.

Also, earlier this week, I did this, with the lights I bought on my early-September trip to JoAnn's:

They blink! I dunno, I just like them. They are a tiny bit glare-y (that's my one complaint with those little LED bulbs) but with it getting darker earlier they help - and once Halloween is over maybe I could leave them up for a bit and just have them on the orange, for fall.

I also decided to open the October Doki Doki crate that came a few days ago, on the grounds that there might be something I want to decorate with in it: 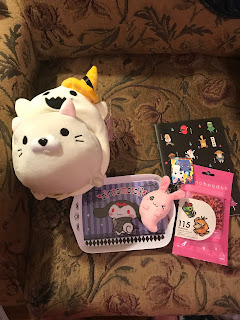 A little notebook with yokai (I think that's what they are) on it, a perler bead (mini version) kit to make a Psyduck and a Caterpie. (I once said if I were a Pokemon, I'd probably wind up as Psyduck; its expression seems familiar to me). A tiny tray of Cinnomoroll dressed as a vampire, a little ghost-rabbit backpack-hanger, and a very squishy stuffed toy cat who is either dressed up as a ghost, or who has a companion ghost that sticks to her.

I like the "mochi style" Japanese stuffed animals; they are very squishy - it's a softer polyfil than is used in most for-the-American-market ones (or than what you can buy commercially). It doesn't last quite as well, it does flatten out and clump after a while if you use the toy as a pillow.

Also, a characteristic of many Japanese animal toys: 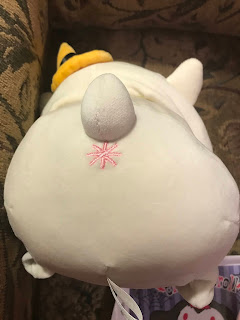 Butthole. Yes. Apparently in some cultures this is more just-funny and less rude than it would be to am American.

Posted by fillyjonk at 8:40 PM