So I got up later than I might have, and faffed around a bit. Decided indeed to take my car in, so I ran over and got my Policy and Law book to read on while I waited. Took the car in, told the guy I knew they checked batteries anyway but I was specially concerned about mine.

I will say Fast Lane is fast. It takes much less time to get minor stuff done to my car than it did in the days when I had to take it to the regular service department. (Fast Lane is under the auspices of the Ford dealership, but I notice they have a sign saying they service any make of car, foreign or domestic. Good to know, if I get fed up and decide to go with a Honda or something for my next car, then I wouldn't always have to drive a half-hour south to have a trusty service place).

Battery was fine, still at a bit over 90% of its original power (in cold-cranking amps). Filter and oil were changed, tires rotated.

Then I came back here, ate, faffed around a little more, did a bit more piano practice. Decided that if I was gonna go do something, I better do it. I had originally thought of driving to Denison for the antique shops but meh, it's hot, and my brief jaunt out earlier today suggested some of the other drivers had been drinking their stupid juice today, and I didn't want to go out on the big interstate.

(Well, I wound up doing so anyway, just in the other - less-trafficked - direction).

And then I thought - well, I've never been to Caddo. Even though I lived here 20 years and they're like 15 miles away. They have a mercantile store that's supposedly like an old-time dry goods place, could be interesting... Google Maps told me they were open until 4, it was a bit before 1:30, so I decided to go.

It's a good thing I did. Google Maps doesn't update for summer hours, their summer hours are that they close at 2. Because it's an old, old building with no air conditioning.

When I got up there I saw the sign on the door, looked at my watch - 1:47. Door wouldn't budge. I groaned inwardly, I was too late. But then the owner came and pulled the door for me - it just stuck. I apologized for being so close to closing but noted that Google Maps didn't have the summer hours and she apologized and said "I better see about getting that changed."

It was a lot of random stuff. Mostly the sort of....stuff you'd expect in a tourist-area shop. (I did buy one thing, but it's for an online swap, so I won't describe it here in case my swapper reads this).

There's not a whole lot else in Caddo. There's a Dairy Queen that I think is well-regarded for some reason (yes, chain outlets differ in quality; I have eaten at IHOPs whose food was pretty good and others whose food was terrible) and the predictable medical cannabis dispensary* and a tattoo parlor....so no real other reason than the mercantile for me to go up there.

(*I remember in the 1980s how every wide spot in the road had a video rental place, apparently those made money hand over fist. Now the thing is medical cannabis places, though I suspect the market for that is not going to be as big as the market for rentals of recent movies was in the era before streaming video online)

Driving up there....well, I wasn't expecting the little section of interstate I took to be under construction, and they had shortened the merge area of the onramp (they had a sign warning of that but by then it was too late to detour) and I had to literally pull to the top of the onramp and STOP. Bad form, I know, but it was down to one land and I didn't want to merge smack into an 18-wheeler. And as I said there, I said "oh fudge. You have to be fudging kidding me" and yes I really DID say "fudge" but I was worried about someone barrelling up the onramp and smacking into me and pushing me into the fairly heavy traffic....fortunately no, and I was able to merge in after not very long but yeah. Might not have gone had I known.

Decided to go the "other" way back - state route 22 is the one that goes through the town and I glanced at my big gazetteer and found that I could either go west or east on it and would eventually get to a way to easily get back home. So I went east, I was already facing that way.

One thing that strikes me about living here is how much empty space there is. Oh, I'm sure someone owns all that land, either a rancher or a pipeline company or someboday, but there's just not....a whole lot around. I looked closely every time I passed anything that looked like people might be there, just in case something happened to my car and I'd have to hike off to get help. (I SUPPOSE "*55" is still a thing but I don't know if the state police will go to every location or just the interstates...)

Eventually got to Bokchito, where I turned on to 70 and....yeah....the bypass, which I had never been on, puts you off somewhere TOTALLY different than what I expected - instead of coming in to town from the east, close to where my house is, I came in from the southwest (the bypass loops around town). So I decided: heck, I'll be coming in on Main Street anyway; maybe I stop and check out the new toy shop and also go to the gourmet shop. So I did.

The toy shop is pretty new - it was only a week or so ago I first noticed it. I hope it keeps going; there are almost no actual toyshops anywhere in the area (there's a couple aisles in the wal-mart, but they're they only have the pretty bog-standard things, nothing unusual or upscaley or more-creative). This shop has fancier nicer toys (some Melissa and Doug items, a lot of those sort-of-fancy craft kits for kids, lots of special kids' books). They also have a tiny area set up in the back with sort of a knockoff of the Build-a- Bear concept: empty stuffed animal skins and a big thing full of stuffing with a foot pedal and a blower. I wonder if they're going to start doing birthday parties or something...

I did buy two things, I wanted to give them a little support. (as I said, I HOPE they keep going but I'm not sure....sometimes people in this town are very weird about what they're willing to spend money on....). So I bought a tube of a little building toy called Plus Plus. I'm gonna hang on to it for my niece's birthday in October. (I figured: better buy it now, just in case - just in case the shop doesn't make it, or they're all sold out of it later) It was compact - so I thought it might be good for traveling - and it seemed like a fun, clever idea. (It says "ages 5 through 12" but I think an adult could have fun building with these too). (And turns out their prices are totally competitive with Amazon, which is good - there will be no "showrooming" that way).

And I bought something for myself....no, not one of the "stuff it yourself" critters; I might have considered it but I was self conscious. But they did have a small rack of Aurora brand stuffed animals (again: they do seem to be going for the slightly-higher-quality-than-what-walmart-has market, which is probably a smart idea). They had Llamacorns.

Which, the hangtag helpfully says, are 50% llama and 50% unicorn. (Apparently those unicorns get around; I've also seen pandacorns and kitticorns and pugcorns). So I decided to get one. Because they were pink and have sparkly hooves. 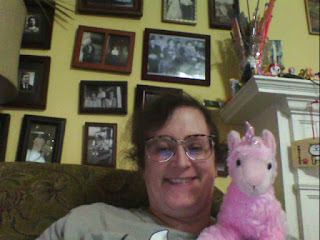 Not totally set on the name but am leaning towards either Sparkle or Twinkle.

I also got a new (collapsible, silicone) small colander because the melamine one I bought off Amazon (to replace a similar melamine one I dropped and broke) is developing cracks in it...the one I bought from Amazon was far less well-made than the first one I had, and I wish I hadn't dropped it. But at least a silicone one will just bounce if I drop it, and it will fold flat to store.

I need to finish my piano practice and once the sun's a bit farther over the yardarm I might try going out and doing a bit of brushcutting in order to get in my exercise for the day. Yes, it's very hot, but if I work in the shaded part of the yard it should be okay. I already bunged a coconut water in the fridge for afterward.

Posted by fillyjonk at 4:41 PM