I took the tree down today.

I always think of WH Auden's "Christmas Oratorio," in particular, the section that is sometimes excerpted and called "For The Time Being" - about Epiphany, that time after Christmas when you put it all away 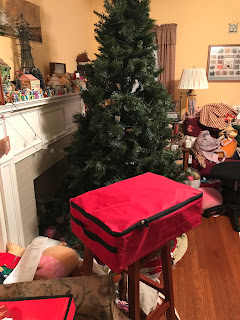 Well, so that is that. Now we must dismantle the tree,
Putting the decorations back into their cardboard boxes –
Some have got broken – and carrying them up to the attic.
The holly and the mistletoe must be taken down and burnt,
And the children got ready for school. There are enough
Left-overs to do, warmed-up, for the rest of the week –
Not that we have much appetite, having drunk such a lot,
Stayed up so late, attempted – quite unsuccessfully –
To love all of our relatives, and in general
Grossly overestimated our powers. Once again
As in previous years we have seen the actual Vision and failed
To do more than entertain it as an agreeable
Possibility, once again we have sent Him away,
Begging though to remain His disobedient servant,
The promising child who cannot keep His word for long.

And yes, "some have got broken" - I dropped one small nondescript ball when trimming the tree, and knocked a fancier, nicer one off this evening 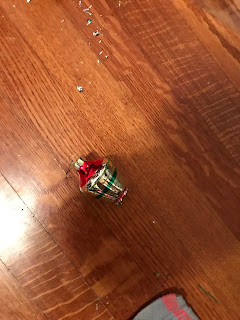 But I cleaned it up (including using a damp paper towel to get the last bits of the glass so I don't embed it in my foot).

So all that remains now is a bit of glitter, and the fading amaryllises, and the Nativity scene, which I am going to leave up at least until tomorrow (which is properly Epiphany).

In a way it's nice to have the space back and have my living room be more navigable, but at the same time, it makes me a little sad - especially this year - to put it away. Now it's just a long slog through; I don't ever do anything for Valentine's Day and I suspect this year my birthday will be me, alone in my house, not going out for anything, as it won't be safe yet. (I do not expect to be vaccinated before May, if then. And even then it sounds like travel will have to be put off several more months) 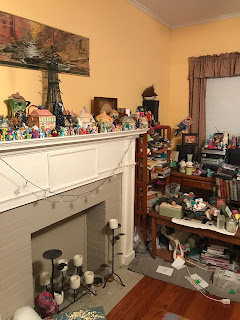 I did keep out the little angel my mom crocheted for me as a tree topper - I had an old one from a craft shop but the starch in it had started to break down and discolor, and anyway, I'd rather have one my mom made. 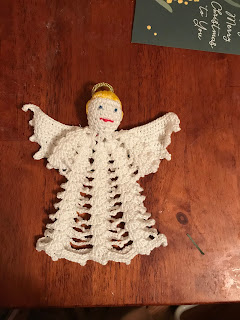 I had a thought of clearing off my coffee table and moving it on front of the fireplace (which isn't a REAL fireplace; it's plumbed for a little gas stove but I have that sealed off though someday, maybe I consider having one put in? I don't know). And then putting my pressed-glass-that-looks-like-cut-glass stuff on it and setting candles in it and some evenings lighting the candles so I have something nice, at least, to look at.

I suppose the other option would be to take a few of the Ponies down off their high shelf and set them up there. I don't know.

But I feel like I need something; I have a feeling the next few months are probably going to be the hardest of my life.

Posted by fillyjonk at 8:21 PM