* Both my mom and I had been concerned about my brother's apparent insistence on traveling (with his whole family) to her place for Thanksgiving - both the effort of "how do you drive 10 hours if some places have closed bathroom access" but also "what if states start 'requiring' quarantining/closing borders" and the biggest one - what if they pick it up and bring it to her, or get it when they go see my sister in law's other Illinois relatives?

Well, today he called her and said "You know, I don't think there's any way we can safely do this"

Which means not only does my mom not have to go to some extra precautions (she was considering trying to buy a HEPA air filter) but also some of the extra cleaning she would do is now not necessary.

Oh, it still sucks a lot, and I wish it were like a normal year, where tomorrow evening I'd be packing my bags to hop on a train Friday, but at least now one worry we had is relieved.

They never travel at Christmas, and I suspect Christmas will be even more concerning than Thanksgiving but good grief, I feel better about this now. I think he made the right decision, and it helps that it was HIS decision and not my mom telling him what to do and finally wearing him down.

I am very hopeful Thanksgiving 2021 will be more like they used to be. Well, they never really will be with my dad gone, but you know what I mean.

* I finished the long-on-the-needles Opal socks. I think I started these back in January, but it's not been a good year for me finishing things, I guess 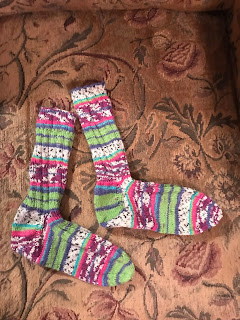 I intentionally did not try to match the color patterning - it's a very long repeat and I was concerned I might run short, and I also kind of just randomly started them without a plan. The pattern is the Yarrow Ribbed Sock from the Nancy Bush vintage socks book.

I kind of want to just start another new pair of socks, except I have three on the needles I should finish. One is just simple stockinette stitch but the colors are kind of weird and I"m not sure I love them. Another pair is a complex slipped-stitch one that takes concentration, and the third one is a cabled one that I'm not sure why I never restarted it....

I do need to wash these before wearing them; brand new Opal is kind of stiff and unpleasant but it softens up with washing.

* I am, uh.....treating the issue of the other day (mainly some dietary changes) and things seem to be improving a little. I guess I really did shift away from my more healthful fruit and vegetable heavy diet recently and that's been to my detriment. I probably need to clear the freezer out a little and reshuffle things and then get some more frozen veggies....

I will be happy when case counts go down locally and I feel more comfortable shopping more regularly. 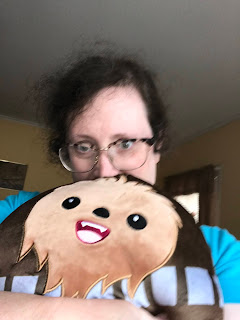 A while back - a previous trip to Walgreen's - I found this. It's a Squishmallow version of Chewbacca. It amused me and it's also cuddly, I admit I've been using him as a neck pillow when I read.

* I had ordered some "Malted Milk Biscuits" (actually cookies, but less sweet than American cookies) from Vermont Country Store and Fed Ex seemed to do me dirty again - I saw the truck pull up, the guy got out, looked, then left, and then I got the message that it had been delivered. Except it had been not.

I waited a day. Nothing. So I called Vermont Country Store (because Fed Ex only would say "your package has been delivered, goodbye"). They said they'd send a new set out.

Well, then, a few days later, the cookies showed up....delivered SmartPost. I was not told it was SmartPost. And Fed Ex did not suggest that it would be.

And THEN, then, I came home from church Sunday.....to a Fed Ex box on the porch. Yes, more cookies. I now have a dozen packages of them (well, eleven and a half, I've eaten some).

I decided to do the honest thing, and I called Vermont Country Store about it, offering to pay for the second shipment. The person I talked to at first said "I've never had to deal with this before, I will have to talk to a manager!" and I gave her my number (as I was going off to class). Well, I got a voicemail: enjoy the second order of cookies, no charge, we're sorry it was a hassle.

I suppose it's possible they filed a claim with Fed Ex, but for $12 or whatever it was of cookies it might not be worth it. Anyway, I have many cookies, and ones that are good for dunking in tea. And if worse comes to worse, I could make crumbs and used it as a crumb crust for something.

And my second case lot of sweet potato puree came, so I'm pretty well set for a couple more months on that. (It's too bad that I can't order groceries, like, fresh food, for delivery, but that's not a thing here. I would love to be able to get milk and fresh vegetables and everything and have it meet me at the door when I get home).

Posted by fillyjonk at 8:14 PM

My wife wants to see her widowed mom in Oneonta, NY, about an hour from here fo tday. I am worried because m,y wife is teaching in person. My daughter is home for school, I'm generally at home.