For personal reasons, this has been an upsetting week. (Nothing to do with the wider world, but still: upsetting).

A couple of things I thought or read about, which led to other thoughts:

- Someone on Twitter commented that what they missed were not so much specific things - like dancing, or singing publicly, or whatever - but they missed the loss of POSSIBILITY and yes, that feels very much like it. I think of weekends in the before-times, I wouldn't necessarily be going somewhere every weekend - but there were possibilities. I didn't often go to restaurants, but it felt like a possibility. Now, when you have to weigh everything you do against a clear and present risk (as opposed to the more nebulous and easily-ignored risk of things like car accidents). Also, for me, knowing someone who died (my cousin) and another person who is ill (a friend from church, but hopefully she is on the mend now) makes the risk feel more immediate.

- And also, just the fatigue coupled with it - the wearing of a mask, the having to sanitize my hands, some places getting my temperature checked (the pharmacy where I picked my medicine up did that). And the vigilance - is the place too crowded? Are people distancing? Is anyone being a loud fool?

It reaches the point where sometimes I've thought of going out, and have decided it doesn't feel worth the extra effort and worry, so I mail order whatever thing it is instead.

- An article I read, about how "fun" seems elusive these days, and yes, I've noticed that: the author wrote about how it was like the baby bird in the old "Are You My Mother" children's book (which I remember WELL, it was one of the first books I learned to read, and also I remember my mom found a French copy somewhere and it was my introduction to French). But anyway: "Is this fun?"

Or maybe, more, it's like that butterfly meme of a couple years ago: 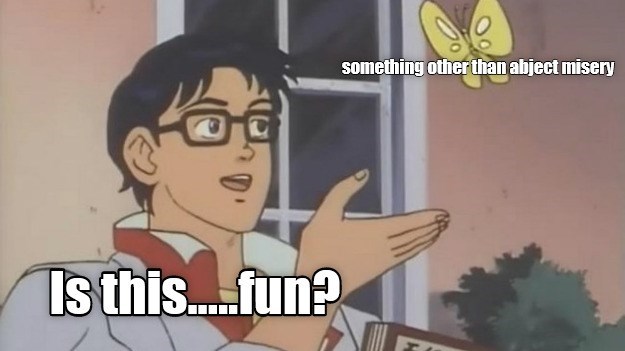 I opined that maybe we will need "fun counselors" or "fun therapists" after this is all over to help us remember what fun was.

Though it's different for everyone. I never particularly found going out to movies fun; I'd find more fun in, like, hanging up a sheet in the backyard on a warm summer night and having friends over and playing one of my dvds projected on the sheet, almost like a drive-in movie sort of thing.

Unnecessary shopping can be fun - I remember enjoying doing gift-shopping for people, or just roaming around antique shops, and while I suppose I COULD still safely go antiquing, again, it seems like kind of a lot of effort?

Bell Choir was fun, and I hope that can start up again some time.

The just-hanging-out sort of thing, whether a potluck with my colleagues, or meeting up with a friend, was fun.

I guess for me "fun" also does somewhat involve other people. I can get a little fun from getting involved in sewing or knitting but I can also tell it's not as FUN fun as some other things.

But now, looking at the little things.

While teaching lab today - it was another one of those computer simulation things and dang, I will be glad when I can once again do real labs with people working together and interacting with each other - I was hanging around, using the classroom "instructor" computer, and because I didn't want anything too "personal" on there, I kind of browsed around for information about Cuyahoga Valley National Park (née National Recreation Area) and I found a "conservancy" site that apparently helps support the park....and they had cool merch. And I was in a nostalgic mood anyway; I really have no interest in going back to the town where I grew up but I would like to see the park again some day.

(The site is Conservancy for CVNP). I ordered one of the cool "Bridge" t-shirts (it's a rose-color and has an almost Civilian Conservation Corps style graphic) and a long-sleeved t-shirt with the park map on it. And a pair of the park socks to go in with my mom's Christmas present - she was a volunteer there years ago and might enjoy the socks. I might place a secondary order if my mom thinks my brother feels enough ties to the place that he might want a hoodie or something, it would certainly make for an easy gift, and it helps support the park).

So I have those coming, and also that link to my past - and maybe a hope someday to travel back there to see it?

And I decided I am getting some amaryllis plants to force this Christmas. I've long wanted to but with traveling, I can't. But this year I can't travel so I guess one little way of making lemonade out of the giant lemon that is 2020 is to order some amaryllis and force them. (A tentative plan I have for Thanksgiving week is to deep-clean the house, do Christmas decorating, and then hopefully just be able to mostly enjoy my Christmas break as best I can here - maybe get a lot of sewing and knitting done? Maybe watch through the entire series of "The Good Place" which I plan to do eventually)

And I have a chicken roasting in the oven. That helps too. And I ordered some smoked salmon from SeaBear, it should be here maybe tomorrow. And I plan to splurge for Thanksgiving and order something from them, maybe fish, maybe crab. And maybe do the same for Christmas. I've spent more money on comfort things this fall but maybe that's okay? And maybe I get back into doing a little more baking? It's kind of hard right now because it's harder to share - in the before-times, people would often bake bread and take an extra loaf in, or bring cookies at Christmas, whatever, and that's not happening this year. (I'm not even sure we're going to do a Christmas party at church).

Right now I'm pinning my hopes on next year. It looks like the UK might be rolling out a vaccine soon, and we received some news in my department today that I'm not really at liberty to divulge but it suggests a vaccine IS coming here. No idea how effective it will be but that's okay too - even partially effective will help.

I suppose the next hurdle for me is to make a small list of things I might want for Christmas that would not be too arduous for my mother to obtain - I know she gets catalogs and I guess this year that's how we do it. (I wish there were more of an element of surprise; it's the small nice surprises I miss)

Posted by fillyjonk at 5:30 PM

possibilities are now impossible.
i still don't know what to do re Thanksgiving...