I persisted this evening despite being tired and bummed out and started the new sweater of that "Plentiful" yarn - because it's a fairly simple pattern and I want to work on it before the yarn's discontinued, you know, just in case they lied about one ball being enough.

It's maybe a slightly insipid lavender, but it looks better in person. (It was this or a gray. There were other colors but I didn't particularly like them, and I didn't want any of the ombres) 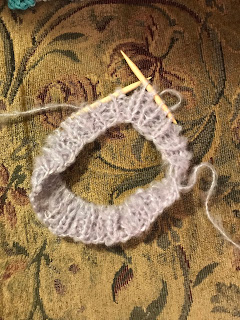 I'm being punk rock here (heh, as much as I ever am) and am not swatching, figuring if the collar (that's what that is) fits, the rest of the sweater should be okay. If it turns out not to fit me I can probably find a smaller person to give it to.

Also, this. Someone posted this on ITFF and it was, as they say, straight in the feels:

Lots of things here that affect me. For one thing, the unaccompanied voices always gives me chills - I am not a great singer and I love hearing people who are good at it, and who can do harmony.

And also the fact that they recorded that just as the various lockdowns/distancing measures/etc. were getting started - seeing people that close and *singing* in the open feels like a vanished world. I deeply hope for a day when we can have that again. (Concerts over Zoom do NOT suffice)

But also the text they've set it to - a poem, really, more than a hymn (though God is mentioned, it doesn't seem so Christian-specific) by Lloyd Stone.

Especially these lines, which hit me, because I was feeling "homesick*" this evening:

"My country's skies are bluer than the ocean,

And sunlight beams on clover leaf and pine.

But other lands have sunlight too, and clover,

And skies are everywhere as blue as mine."

(*yes, I know, I've lived here now longer than I've lived anywhere else. But I still miss Illinois, where my mom lives now, and Northern Michigan, where all her relatives lived, and Ohio where I grew up - especially what was then called Cuyahoga Valley National Recreational Area)

But yes, there is truth in that - that other lands have sun, and plants, and blue sky, even the place where I live now, as small as it seems some days, and as mired as it seems to be in problems.

(But Finlandia does especially make me think of the Upper Peninsula. As does Dvorak's Ninth Symphony).

Posted by fillyjonk at 9:18 PM

FINLANDIA was played at the wedding of me and my ex. She's Finnish (well, 3 of her 4 grands were born there and the 4th in Russia that they stole from Finland). So it makes me melancholy on a lot of levels, including the ones you mention.