I wrote one of the exams for week after next last night, after doing the fieldwork, so I felt like I could take the rest of the weekend mostly off. (I do have a little grading to do).

So I ran to Sherman and Pottsboro - a quick trip to JoAnn's because it's one thing I can do that sort of restores my balance a little, and I wanted to go to a bigger grocery than the ones in town (I will not go to the Wal-Mart, I have heard too many stories of the local one of people loudly refusing masks, and even harassing mask wearers, and I don't need that).

JoAnn's seems to be getting more stock in ("nature is healing!") including some new yarns: 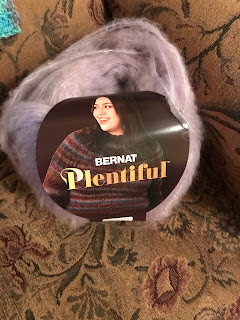 This is a bulky weight, and allegedly there is enough in the ball for a sweater, even for a bigger woman like me. (The size I will make is listed as Large, which is actually the median size on there - 44" finished bust). I plan to start it as soon as the shorter 10.5 circular (sigh, they didn't list all the needles needed on the ball band) partly as a way to break my stall on working on bigger projects, but also because I want to try to get it knit up while I could still get more of the yarn if I run short.

I'm also hoping it will be a quicker knit - bigger yarn, and knit from the top down, and not a fancy pattern.

I also got suckered into buying (well, it was half off) some more of that "cake" yarn, this time for sort of a ragamuffin-style scarf, because of the colors: 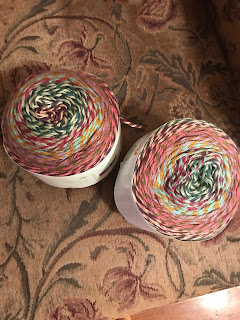 I will probably just do this as a simple ribbed pattern. (Garter stitch scarves, as classic a handknitter project as they might be, are kind of boring, and there are a lot of interesting ribbing patterns out there)

I also started my Christmas shopping; this is for my niece: 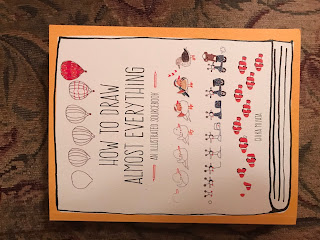 She likes to draw, and a quick skim of this book (it's aimed at adults) didn't reveal anything TOO adult, but it's also not super childish (she is 8 now). It gives me sort of a "Ed Emberly meets Richard Scarry" feeling because there are lots of things labeled (like "Stirrup pants" and "jodhpurs" in the section on drawing people in different outfits).

I thought it also might be a source of ideas of things to draw....

And then on to Brookshire's. They don't have quite everything that I buy that Kroger's does, but they also have some things Kroger's lacks (fancier cheese, for example). I get the sense they're probably the most "upscaley" supermarket in the area, or at least the most "upscaley" one I can easily get to.

They also have better produce and some better meat. (I got some pork ribs for the slow cooker later this week). And it's just somewhere DIFFERENT, which I find is something I need in this - the work-school-church circuit (and for a while, there wasn't even school or church, really) gets awfully small after a while. And driving around just to drive - I wore out the easy to go to places pretty fast.

But I saw this: 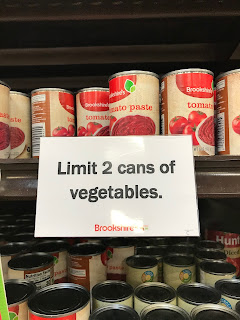 That's a little alarming. (They also had limits on canned beans and on TP). I haven't seen limits anywhere else recently. (I wonder if, because this is in kind of a "lake house" area, if some of the folks from the Dallas area who have lake houses up there are stocking them as "bunkers" in case the caseload gets really bad/cities start doing lockdowns again).

I was careful in my shopping because of those signs - if anything, I am a rule-following nerd - and when I got to the checkout I told the young woman working there, "If I violated any of the limits, just tell me and you can pull the item out, I won't be upset" and she looked over my order and said "No, you're fine, but thank you for reading the signs" and I figured they have probably taken a fair amount of flak for that - though yeah, if you have people who have deep pockets buying up all the canned vegetables, that's not so great for the folks who come in to get stuff who are on a budget or can't shop just anytime. (Though a limit of two cans of vegetables is really pretty small for a family - I often buy more than 2 at a time just to avoid having to shop a lot).

And yeah, I do suspect we may see another period of shortages if the expected "bad second wave in the fall and winter" hits, so I'm pretty conscious of keeping the basics on the shelf - canned beans are pretty good because you can do a lot with them, and tomato sauce is necessary for a lot of things.

But I did get some necessary things, and also some nice things that are harder to get locally (smoked salmon, fancy salad greens). And it was somewhere different, like I said.

And then home. I spent some time this afternoon cleaning - mostly my living room, but a little in the kitchen and dining room, and I might do more tomorrow. It's nicer to have things sorted and put away - when I get busy it's harder to do and also, when I get home at night and literally have one hour between finishing my work for the day and bedtime, cleaning feels like something I don't want to do (And for a variety of reasons I don't want to hire a person, though I know some of my colleagues use cleaning people). 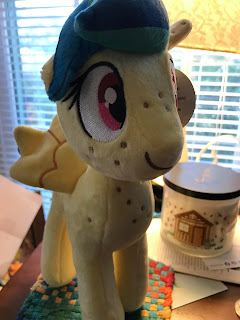 Her name is Apogee. She is a fan-created pony, part of a planned comic series. I bought the first comic book and, uh, it's not family friendly (it did not promise to be though). There are swears and also the situation is not the cheerfullest. But at least I can kind of headcanon Apogee as more or less who she is - a happy little pony who wants attention (but seems not to get it from her divorced and distracted parents). But she's certainly cute. (Those are freckles she has, but they are almost like a constellation pattern).

She took a LONG time to come - she was in production early this year, then the pandemic hit and shut things down, then, air freight stopped happening so apparently the Apogees had to be shipped from the factory on a container ship, and then transported to Lunar Shine's headquarters in Wisconsin, and then shipped out from there....so it was at least a month's wait for me, and I ordered later than a lot of people. 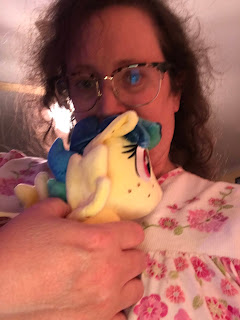 (And as a child, I found I liked characters who seemed....maybe a little friendless, or, like Apogee, not getting the attention they probably deserve. I don't know if that's that I sometimes felt that way myself, or if I felt like "But *I* can be their friend!" or what)