* My printer is still holding strong (I used it this afternoon) so hopefully the glitch on Friday was just a glitch. I would very much rather not have to buy (and download drivers for, and remember my Wifi password for) a new printer.

* Apparently Japan Crate has resolved its shipping issues - both my August crates came last week, the September Doki Doki crate came today. Not a lot that excites me in the September crate - a melamine plate (I dunno, I might put it under a plant, I find them kind of icky to eat off of), and a hairbrush (Well, it does seem good for detangling) and another one of those little mats and...I forget what else. No plushie this time.

Last month's crate had this: 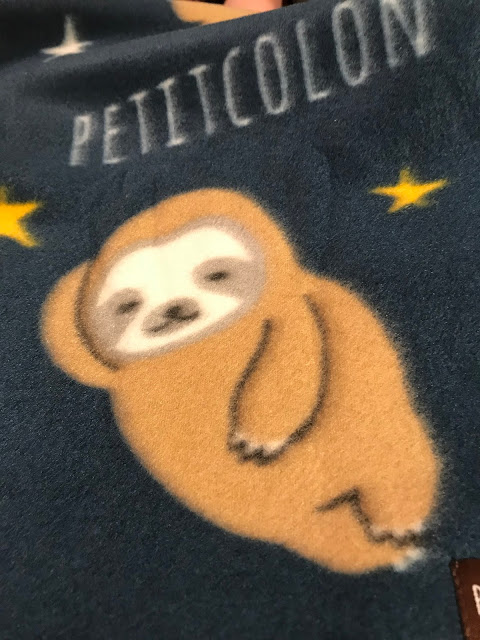 Another one of those blankets, this one with a sloth (and a name that....well, to an American, it's not the best name ever...) 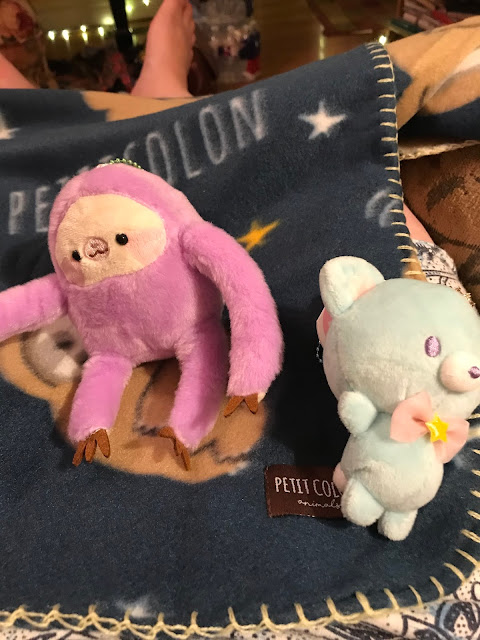 Also there were a couple little stuffies (I think maybe the sloth was the July crate....)

* I started reading "The Homesteader." I can see that Micheaux was primarily a screenwriter/movie producer; there is a cinematic quality to it (the female protagonist is described as "leaping on her horse" in a way that I....don't think people do?) It's interesting though, I am wondering if there is going to be an early inter-racial romance (the Homesteader is at least part African heritage, though Agnes - whose father is Scots - has a "secret" about her past - her mother is dead - and I wonder if her mother had some mixed heritage. She is also described as having mutable eyes - sometimes blue, sometimes brownish, which....eyes don't work that way...I have hazel eyes that look a little more brownish in some outfits but no one would ever mistake them for blue or for true green). So there are some things where you have to suspend disbelief a little. (Then again: Melville persistently referred to whales as "Fish" in Moby-Dick)

* Been having some insomnia issues, so as soon as I finish this I need to try changing the sheets on my bed to see if that breaks the cycle. (sometimes very small psychological things like that will help; I also have a new sleep-shade I can wear and that maybe will help). It may be staying up too late, it could be hormonal (I notice the racing-brain that tends to be a feature of that - I can't go by the calendar any more because of my age everything is messed up). Or it could be stress. I do know Saturday night as I was getting into bed my brain served up "oh hey, let's ruminate on how the last time you were ever able to hug your dad was in May 2019, and the last time you ever spoke to him was in July 2019" and I don't like the finality of ideas like that.

Hopefully I can push that kind of garbage out of my mind tonight. Maybe I read part or all of another Asterix story.

* Went to the grocery today. So many unmasked people. I just....I feel like we'd have this under better control if people were just willing to mask up. Oh well. One woman I saw who WAS masked, she had a similar hair cut and color, and was dressed very similarly to how my friend Dessie from church dresses and at first I thought "OH! It's Dessie!" and I thought "I know she has been being careful, I could totally go up and hug her and it would be safe for both of us" but when I saw her in another aisle I saw it wasn't her and I was surprised at how disappointed I was.

If I hadn't been so tired I might have considered driving to Sherman and going to the Kroger which has a better selection and seems to be stricter about expecting masks (though then again, I think if someone were belligerent about it, they'd just let them in unmasked)

* Most of yesterday afternoon was spent on this: 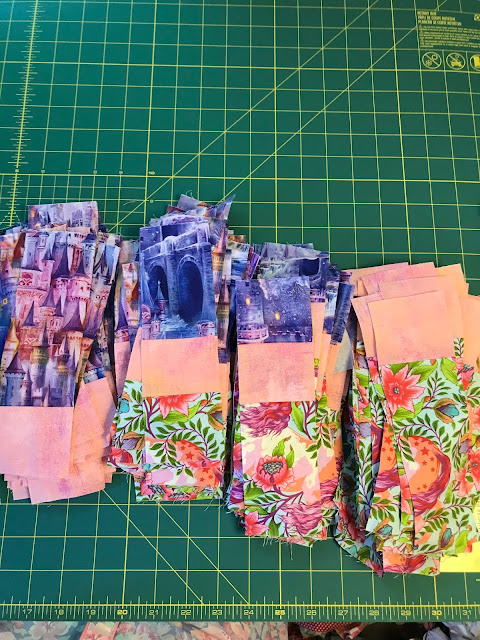 This is the next quilt top - all the blocks are alike and then they are arranged in a sort of zig-zag pattern (there are actually several ways they can be arranged; this one is not unlike Log Cabin in its design). I also sewed a few more blocks (I had six or eight done already). It's nice to have something simple to sew on that takes not too much deciding, and for putting the quilt together, because all the blocks are identical, I don't have to lay it out - which is a time consuming step and requires a big flat area to lay it out on. 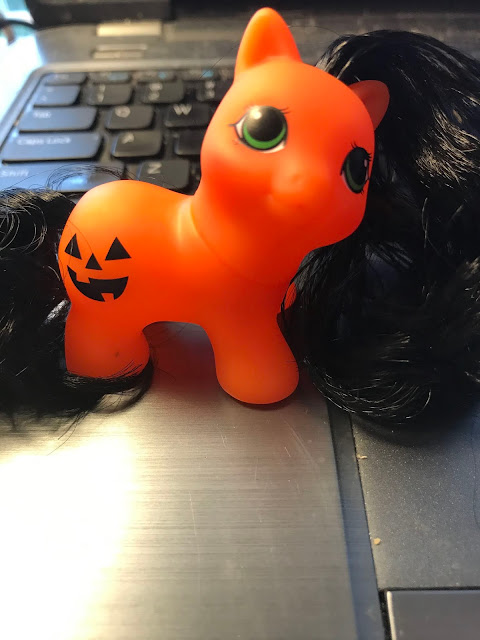 I've named her Lantern Glow. She's one of those HQG1 ponies - modern re-imaginings based on the old 1980s molds. She is one of the "newborn" sized ones - very tiny. I don't even think I have one of the original newborn mold ones - they are hard to come by and people like them so they are expensive on places like Etsy. This one is not a strict reproduction - as far as I know, Hasbro never made a Hallowe'en themed pony like this. (I do have a number of Baby ponies, but they are bigger than the Newborn size)

Posted by fillyjonk at 8:19 PM