Lots of things happened today. Not all good.

Zoom wasn't working right, I wasn't able to easily share screen and I guess I wound up turning the camera off inadvertently but that's okay, as long as they can see the powerpoints and hear me, that's what's important. But again: teaching a remote class is HARD and I can tell I'm not good at it - not good at it in the way I am at in-person teaching - and that makes me sad. I don't like feeling not-good at something. I've felt not-good at a lot of things this year. I am not the kind of person who can graciously, as they say, "embrace the suck." So I wind up railing at the universe and stomping around and even cursing in my empty house where there is no one to hear me.

Also, a colleague opened the door while I was mid lecture and said "OH YOU ARE IN HERE. I WAS GOING TO TURN OFF THE LIGHTS IF NO ONE WAS IN HERE" and yes it was loud and if I had been thinking instead of startled and nettled I could have said "DO YOU WANT TO WAVE TO THE CLASS ON CAMERA WHILE YOU ARE AT IT" but it was one of those esprit d'escalier things - I only thought of it after I got home.

Another colleague reminded me of the need to buy the new paid parking decal, and we also have to have our IDs updated. (I am not sure if they are going to have us take the mask off for the photo, or use the old photo, or have us be photographed masked, or what). After my last class I figured "I have two hours before office hours and while I need to get groceries, there might still be time to do both"

I went and PAID for the permit, but then realized that the police department (campus police) often closes down from noon to 1 and I thought "no problem, I'll get groceries, grab a quick lunch, and probably still have time."

Got my groceries, and this time I remembered I needed more of the little cans of tomato sauce (I had to use tomato paste in the meatloaf I made the other night - it was fine, but I use tomato sauce a lot and the little 8 ounce cans make more sense for a single person) and mustard (I don't particularly like mustard qua mustard but you need it for some recipes, and I like to keep a jar of Grey Poupon on hand as an ingredient).

Got home. Stepped in the door. Thought, "It feels....warm....in here" Went to check the thermostat - sometimes I do turn it up.

Nope, I hadn't. It was several degrees warmer than what I had it set on. So I tried the obvious thing first: shut down the cooling and turn it back on. Nope. Then try shutting it down, throwing the breaker for it, turning it back on. Nope. I started to get slightly panicky as it's supposed to be close to 100 this afternoon and I don't sleep well in heat and humidity. So I called the place I normally use, the dispatcher said she'd call one of the guys and he could probably come out.

Then I looked around my house. I tossed a few things here and there (like - took the brassieres I had drying on a rack in the kitchen and stowed them in my bedroom, where I can close the door). Debated: do I try to clean the filthy place up, or make lunch (I had not yet eaten). I was trying to clean when the phone rang - the guy was between jobs and he'd stop by. So I looked around, despaired a bit, and started washing blueberries and spreading cream cheese on a bagel, and I just apologized for the mess.

He did comment on my My Little Pony collection - "Oh, my little girl would LOVE to see this, is it okay if I take a picture?" (I said yes).

The fix was simple enough - there's been ongoing utility work (ONG) in the neighborhood, some trenches being dug (I don't even know) and the door on the inside part of the unit (where the coils are) had gotten joggled loose and he fixed that and it came back on. He did also offer to cut back the brush around the outside unit - I said I knew it needed to be removed but I hadn't gotten to it lately. So I feel like he earned the cost of the service call and it is (slowly, because it was apparently off for the early part of the day and it's always harder to cool this place in the afternoons) cooling down.

I might still get over to get the ID updated and my sticker - my office hours (going on now over Zoom) end in about 15 minutes and I think the campus police should still be open then.

And the last thing - my uncle Bill (my dad's youngest brother) called. He is a stockbroker and manages some of the money put aside for retirement for me. It was just a "let's review your portfolio" type call (I am doing okay, not great, but okay, considering what a nosedive the market took in the first and second quarters). But it also made me sad because while the pitch of Uncle Bill's voice is higher than my dad's (My dad sang bass in the church choir and while Bill probably isn't QUITE a tenor, his voice is definitely higher), the vocal mannerisms and style of speaking are the same. (I mostly communicate with him via e-mail, so I don't hear his voice). Just another little gut punch in a week full of them.

I will be glad when today is over.

The mail came and I did get my long-delayed "crates" (these are probably August's) and I will be opening them (yes, both, I feel like I need it) tonight: 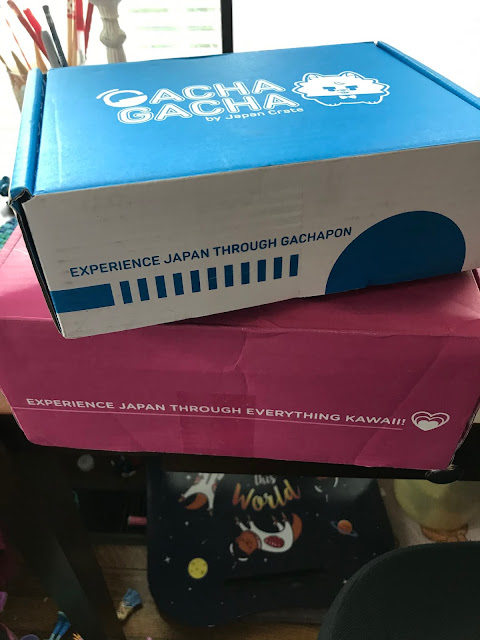 (Ignore the junk on the floor, stuff fell off my desk when I was trying to move some things. The lap desk is something I use as a foot rest.)

It's only Tuesday but I'm already ready for this week to be over. I hope tomorrow goes a little better, or at least is less exhausting. At least all I have to prep this afternoon is to look over the lab for tomorrow.

Posted by fillyjonk at 2:52 PM