So, after my Bad Train Adventure and realizing I can't always rely on luck (having a card with the Best Western 1-800 number stuck in my purse) or other people (begging someone to look up something for me), I decided it was time to get a smartphone.

This was....spendy. (I went with the iPhone 7, the one US Cellular had, because I didn't feel up to shopping around; I wanted one by this weekend when I have some travel ahead of me). And there's the rise in the price of the monthly plan ($25 to about $45, but there's also the "rental" on the phone; I might later just purchase one and give this one back)

And it's HARD to figure out, the learning curve is quite steep if you haven't used a smartphone before. I scribbled down my different passwords and hope I remember which one goes with which thing (or at least that the phone remembers them). It was hot and I was tired and I suspect not in the best frame of mind for things.

I suspect the people in there were laughing at me after I left because I knew so little. Then again, the woman who worked with me said "I don't use an iPhone, I use Android" and I admit I thought with annoyance "then why not send over someone who DOES use an iPhone"

Whatever. I got an Otterbox for it (with embedded glitter but they were out of pink) and a screen protector because I know I am just cackhanded enough at times that I will probably drop the phone.

I also have to set up for autopay; that saves me a bit of money. But I have to wait for the next billing cycle and I think I'll just go back out and get some help with that.

But it has a camera and while it's not immediately as intuitive as downloading from my old camera, I figured it out. So, nice: I have a pretty good small camera that's easy to carry with me. (I guess I can e-mail the photos to myself, too).

So anyway. My first official selfie (I took and discarded a couple at the store, and took one quickly that I posted to Twitter) 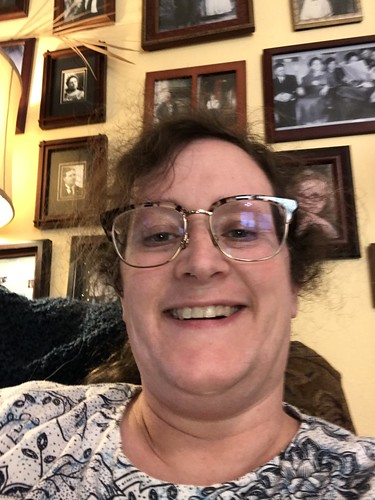 Yeah, it's been a day. My hair's a mess and my eyes are puffy and my makeup's mostly gone, but it was in the low 100s here today and I've done a lot of running around.

And some other things. Here's the in-progress ripple afghan. The one flaw? I made the foundation chain too tight. (Next time I make one of these, I will use a hook a couple sizes bigger than the one I use for the body of the afghan) 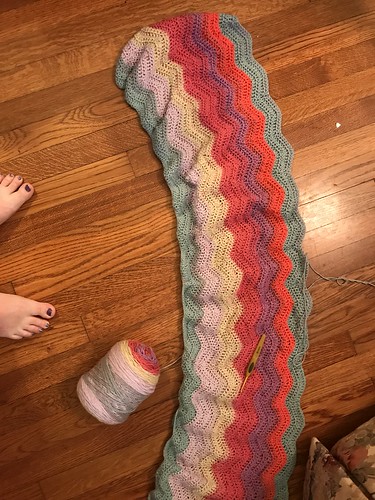 And the "church ladies" here (our CWF) brought me a plant, a nice big peace lily. (They had a large pothos sent to my mom; she was really impressed at how nice it was). I think when you're doing something like a memorial service, having a plant sent rather than flowers is nice; we can keep our plants at least as long as they live. (I will have to look up the care of peace lilies, I never had one before) 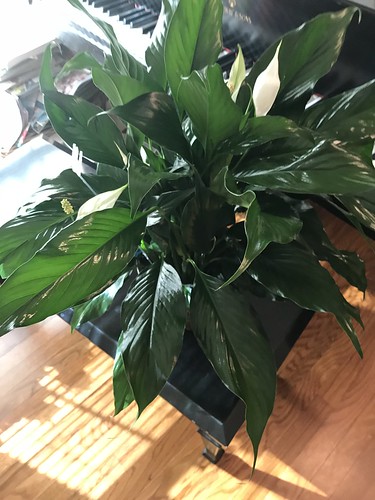 And here are some of the small things I carried back. The magnifier is one I gave my dad several years ago for his birthday (his initials are on the case). And there is the Petoskey stone and the piece of agate.

The paperback book is one he and a student of his wrote; it was based on her dissertation work. They had it published and thought it would sell at the Cuyahoga Valley National Recreation Area (as it was called then; it is now a National Park). It didn't sell that well so there are boxes of it left at my parents' house, and my mom told me to take a copy with me if I wanted one. I grew up running around in CVNRA, so yes, I wanted one.

And that's the Robinson Crusoe book I mentioned: 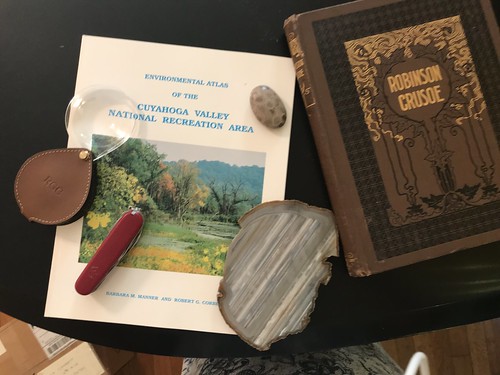 Also, here's the inscription from the inside: 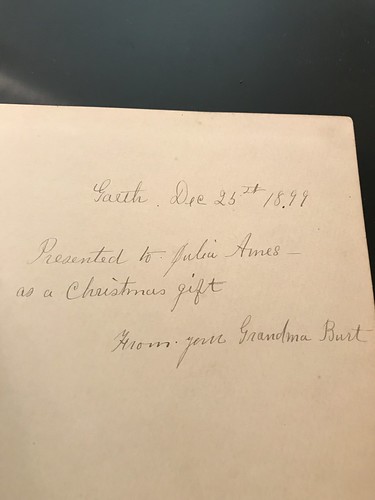 Also a couple of my friends sent me things that I guess fill the role of sending flowers; there was a book off my amazon wishlist and a couple of critters off it: 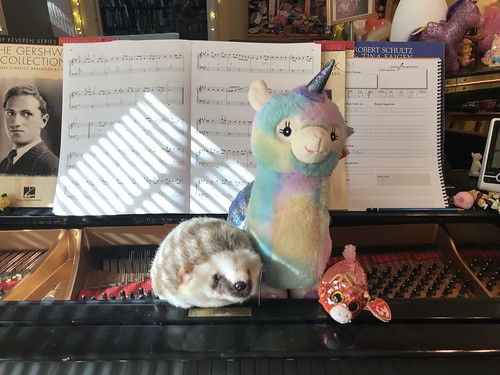 I appreciate the thought but I also admit it seems a little odd to me because I think of stuffed toys as "festive" gifts rather than "consolation" ones. Still, I do appreciate it. (The little unicorn - it is one of those "fidget toys" with sequins you can flip over - was actually sent as a just-fun gift from a UK friend, and was sent off before all this stuff happened, but I received it today).

Posted by fillyjonk at 5:52 PM