So, I needed more triple-antibiotic cream (I guess you can still break out even after menopause...) and some more eyewash (stupid allergies) so I ran to the walgreen's on my way home from lunch.

1. More eyeglass cleaner. It was on sale (Buy one get one half off) and I can put one in my office but I find either my glasses get smudgier in the summer, or else the smudginess bothers me more right now (it could be that this prescription is no longer totally ideal so I notice them more)

2. I always look at the toy aisle just for fun. Today, they were closing out their mini Equestria Girls (probably makes sense as that whole franchise, like the straight MLP Gen 4, is ending soon) and they were $6 each.

And I got one I had kind of wanted, but was never willing to pay the inflated "third party seller" prices on Amazon for: 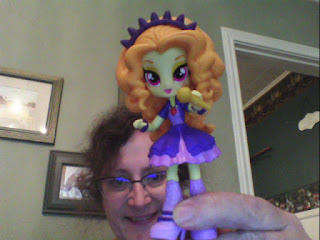 Adagio Dazzle. (I guess they never made dolls of her girlfriends, just her. So I can never do "Taco Tuesday" fun because that was Sonata Dusk's thing). But still, she's cute, and she will go with my other dolls (the Mane Six, plus DJ PON-3, plus Twilight's boyfriend who used to be Sunset's boyfriend), Oh, and Sunset Shimmer, too....

And yeah, I get that she was a "bad guy" but you know? Maybe they get their chance to be reformed before the end of the series. (One of the ways in which MLP is maybe "Christian without actually being Christian" is the idea that "villains" can potentially repent and be reformed and be forgiven....though some of them (Discord, I'm looking at you) can backslide....A big question I know some fans are speculating on is "Are ALL the villains going to be reformed before the end of the series, or will some remain, or will some be cast into the outer darkness?" And I admit, I kind of....like....the idea of them all ultimately being reformed and "saved." (Disciples of Christ is not, strictly speaking, a universalist denomination, but a lot of us have universalist leanings)

The book I talked about earlier is called "Simply Modern Patchwork Quilts" and it's by Janet Goddard. Springtime Maze is the one I want to make - probably with that unicorn fabric, if the strips are wide enough to actually show enough of the design. But several other quilts would work with all kinds of scraps rather than the more planned, fewer-fabrics style that they have.

(I wish we had better radio stations here. I can sometimes get the Rangers games and that's good, but back there in my sewing room, I don't have a TV, and I don't have a good place to set the laptop (I could listen to Pandora otherwise) and I'm not even sure how well my wifi reaches back there. If I ever do get a smartphone, maybe I get the Pandora app for IT, and if my wifi reaches, I can do that...)

But yeah, one thing I periodically dream about is making a ton of quilt tops from all the fabric I have stashed up...not even worrying about "can I get them quilted" (I have one STILL at the quilter and I'm almost afraid to ask about it) but just making them. (Also considering that maybe, just maybe, my big retirement purchase will be a long arm quilter and lessons to use it, so I can quilt up every quilt top I have ever made....give some to friends and relatives, give some to charities either for raffles to raise money or for people to actually USE, and keep some for me)

***
The new probiotics came. I take one (it has to be refrigerated, it comes in a pack with dry ice and coldpacks and everything). I had been out of them for nearly a month and while I didn't notice any stomach issues (I originally started them in 2016, after the stomach thing), I have noticed an effect on my mood. (Heh: an effect on my affect?) I don't THINK it's just placebo effect, and I know they say that there really IS something to the concept of "gut feelings" because your gut flora can influence neurotransmitters....it had been about a month since I used up the last one (I had them while up at my parents', they take the same kind) and hopefully that I have them again things will improve.

Posted by fillyjonk at 1:32 PM

I'm assuming you heard the sad news about Charles G. Hill, but if not, I wanted to let you know. Thank you for all you did to make his life brighter. He clearly found joy in the fellowship that you and other Ponyheads offered him.